So, as some of you may know, I’m trying to post more book reviews on my blog! This month’s book review is based on All the Bright Places by Jennifer Niven.

All the Bright Places is about a girl called Violet who learns to live from a boy called Finch who wants to die. Violet’s sister, Eleanor died in a car crash and Violet blames herself. Finch is a boy who is bullied at school and called a ‘freak’ and his parents don’t seem to care much about him. His dad ran off with another family and his mother is too busy and clueless to know what is going on.

Violet meets Finch on top of the school’s bell tower where they seem to both talk each other off the ledge. Soon enough, Finch is obsessed with wanting to be Violet’s friend and the two strike up a friendship when they are assigned a group project to wander Indiana before they graduate and go off to college.

Violet counts down the days until she leaves school but Finch teaches her that she doesn’t need to stop living just because Eleanor is gone; she has to learn to live with the pain and not let it consume her life. 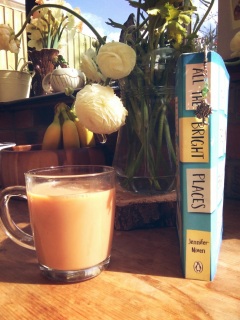 As much as I enjoyed this YA contemporary novel about two people I can relate to personalty wise, I have to say I felt as if Niven almost romanticized dying – I don’t believe this is her intention at all; after all, Niven lost someone she loved to suicide. But the book reminded me a lot of John Green’s The Fault in Our Stars and I can’t help but feel that some contemporary books for young adults romanticize anything they can with poetry and riddles.

If you don’t want to know how the book ends, I suggest you come back after you have read it!

Throughout Violet and Finch’s wanderings through Indiana, they leave things behind and go to insignificant, ‘lovely’ places that aren’t the usual tourist attractions. Finch befriends Violet on Facebook and they start using Virginia Woolf quotes throughout their messages. When Finch disappears, he leaves behind notes and clues for Violet; which reminds me of John Green’s Papertowns. These clues eventually lead Violet to realise that Finch has taken his own life.

Finch teaches Violet that things most people would find insignificant or ugly, are actually rather lovely and these make the best memories. Violet learns to let herself heal and eventually comes out of the dark she has been hiding in for so long. I just feel as if Violet will now go back the way she was when Eleanor died; after all, she has now lost two people who meant the world to her.

At Finch’s funeral, his family refuses to call his death a suicide because of the stigma and shame surrounded by the word. They let people believe it was a tragic accident instead of blaming themselves for not paying enough attention, not reading the signs. Which makes it even more unbelievable that Violet would not notice it; she was closer to him than anyone. It’s true that you can hide your depression from others, but I feel like with Finch’s character, someone should have noticed other than the counselor. However, I do understand where Finch is coming from when he doesn’t want to be labelled as Bipolar or anyone with a mental illness. But it is important to get help and recognize that you do have a mental illness. You don’t have to let a label control you; anxiety, suicidal thoughts, depression, bipolar disorder, OCD, any mental illness doesn’t define who you are.

As much as Niven has highlighted suicide and depression, I can’t help but feel that Violet would have seen the signs – after all, didn’t Niven portray Violet as someone with depression? This is also something that bothers me about the book: we don’t receive enough  insight into the characters, least of all, Violet.

In real life, someone with depression isn’t usually fascinated with suicide facts and quotes and memoirs. Somehow, I feel Niven has made Finch obsessed with dying and when he leaves Violet and his family behind without a word to them – just clues – I felt as if this was quite unrealistic. This topic is sensitive to me in more than a few ways and I feel as if Finch reminds me of someone I once knew. Maybe this is why I didn’t enjoy the book, maybe why I didn’t shed a tear, maybe why I didn’t feel that flippy feeling in my stomach every time I read a good book.

I understand there are probably hundreds of people who feel the same way as Finch and Violet, but I just felt the characters didn’t feel real and raw enough. They were written in first person but by the way they would talk, it sounded more like they were written by someone on the outside, in third person.

Suicide is a tricky subject to write about and I applaud Niven for writing from the heart. It takes a lot of courage but it is also what makes you a good writer.

I did like that the places Niven described in the book were real and lovely in their own, wonderfully weird way: I especially liked the roller coasters created by John Ivers, the Milltown Shoe Tree, the world’s Largest Ball of Paint, the Ultraviolet Apocalypse and the Taylor Prayer Chapel. These places may be insignificant tourist attractions but they are all beautiful and I’m glad Niven introduced me to these places.

I couldn’t find any good photos of the rest but if you Google them, they will come up! These two images were sourced from Google.

I’m going to rate this book as 2/5☆ since I feel uncomfortable with the subject and I’m not sure how I feel about the portrayal of characters. I do think that these books are extremely important, no matter how they are written! Just as long as the message gets across!

Let me know in the comments what you think of the book! Everyone has different opinions!

If you feel depressed, suicidal or anxious, please talk to someone. It is so important! I’m going to put some suicide hotlines down below: