Skip to content
Ramblings Of A Neurotic Writer in Uncategorized September 19, 2018January 3, 2019 762 Words

We were staying near the old town in Dubrovnik, which is a beautiful tourist spot. They film parts of Game of Thrones there because it’s so medieval looking! We stayed just above Banje Beach where we spent a lot of time swimming. I’ve never been in the sea before so it was a very strange feeling.

Eating Out and Supermarkets

The currency in Croatia is mainly in Kunas but some places accept euros or cards. Just be aware that there are a lot of expensive places to eat in the old town as this is where the boats come in and it’s a top tourist spot. We found a nice ice cream stall in the old town that was fairly cheap at 10 kunas a scoop and it’s located right next to the old port.

We also went to several restaurants in Dubrovnik’s old town and had some wonderful dishes, including pasta, pizza and burgers (obviously). One place that Oliver and I really liked was Burger Tiger. It was a fast food place which also had seating and served pizza, pasta and burgers. Their chips were delicious! If you want to know more about them, here’s their website.

We had several supermarkets around where we stayed, called Pemo which were relatively cheap but probably would have been much cheaper if we had been staying on the other side of the old town.

Oliver’s parents rented a car for a few days so that we could travel to Montenegro. It’s a beautiful place to take photos. We had some lunch in a shopping centre and there’s some ruins and a little church that you can walk up to (quite steep). There’s also a cat museum (I didn’t get to go because I found a kitten and we wanted to take him home, so if I saw more, we would have had to rent a truck and drive them all back to the UK).

I know that I’ve already mentioned the old town but it is a beautiful place to go in Dubrovnik. With plenty of tours, cosy restaurants and cute book and candy stores, there’s something for everyone. Definitely go in Captain Candy which has massive pieces of all types of sweets! The alleyways and buildings are beautiful, especially when lit up at night. We really enjoyed walking around and sitting near the water at the old port when we could. 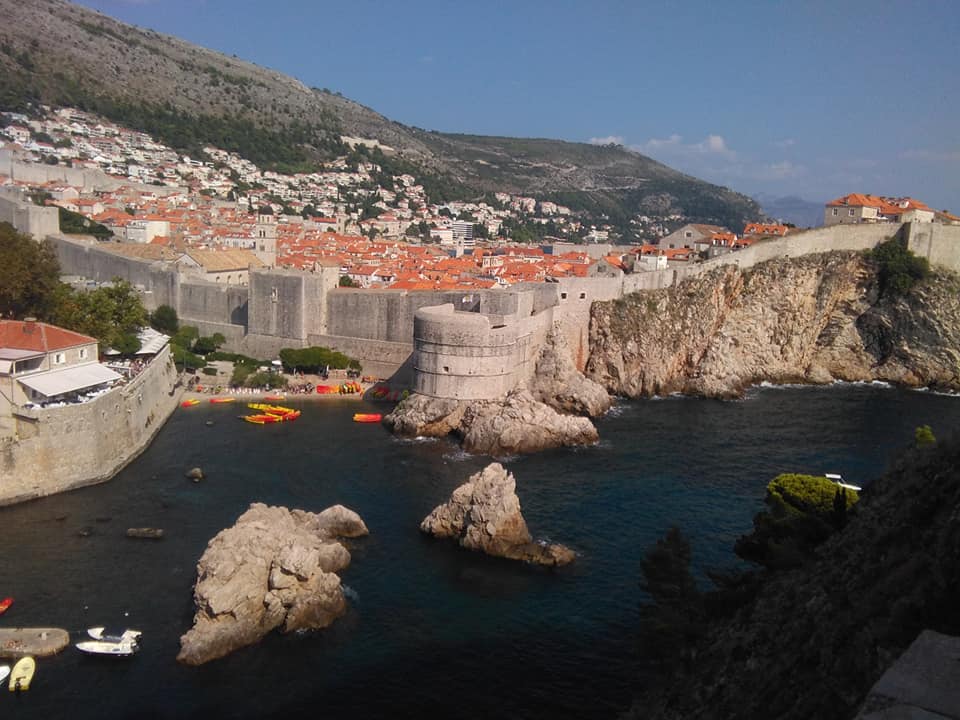 Lokrum Island is just a 15-minute boat ride from the old port in Dubrovnik but costs 150 kunas each which is roughly £20. I wanted to go over to the Island because I wanted to swim in the “Dead Sea” which is a rocky pool situated on the island. It was beautiful but I recommend bringing some sort of swimming shoes as I did cut my foot!

You don’t receive a map when you buy the tickets – I took ours from the apartment with us which was extremely handy. But if you don’t have a map, don’t worry, there are plenty of signs on the Island. We also climbed the very steep hill to Fort Royal, a small building at the top of the Island. We were both so exhausted by the end we had a nap as soon as we got back!

Although the view from the Fort was gorgeous, it was a very tiring day. We did see baby peacocks which were so cute!

I recommend taking snacks with you because the cafes and restaurants are really expensive.

The cable car was about 150 kunas for a return ticket but we only got a one-way ticket and walked all the way back down. It is really rocky and takes at least 45 minutes. It was a really amazing experience to see Dubrovnik from so high up. Just don’t buy anything in the gift shop if you don’t want to be bankrupt!

There’s a war museum at the top as well which tells you all about the fire that happened there.

Don’t forget to tell me if you are going to Croatia or have been; I’d love to know what you get/got up to!

Until next time, love Vee x

2 thoughts on “Things to Do While in Croatia”