I finished watching the Amazon Prime series, New Amsterdam last week and I loved it so much that I thought I would write down my thoughts!

New Amsterdam is set in New York where new medical directer Max Goodwin sets new rules. It’s based on the book: Twelve Patients: Life and Death at Bellevue Hospital by Eric Manheimer. Max disrupts the status quo and wants to breathe new life into the underfunded hospital that doesn’t refuse any one. Max is determined to set things right, no matter what, even if that means going against the board. However, the staff are not sure whether to believe him when he says he can do anything for them.

We learn in the very first episode that Max has cancer but his job is his life so he will stop at nothing to make sure the hospital runs smoothly. The series stars actors such as Ryan Eggold and Freema Agyeman (Dr Who) and shows what life is like every day in New Amsterdam, for both the patients and the staff.

I wasn’t sure what to expect with this series but I’ve seen a few bloggers watching it so thought I would give it a go. I was not disappointed. I’m not a fan of blood and guts but I am a fan of Casualty and Holby City so I wasn’t too worried.

I thought it may take a while to get into but I warmed to the characters straight away. I especially liked Dr. Iggy (Tyler Labine) the psychiatrist and Miss Sharp (Freema Agyeman). I also enjoyed watching the relationship between Max and Sharp unravel so that they could support one another. Everyone was really like able (apart from Max’s wife, I don’t know why, I just can’t stand her.) And I loved the way the series shows the struggles of the doctors, from drug abuse to estranged family. It shows that everyone has problems, including doctors. 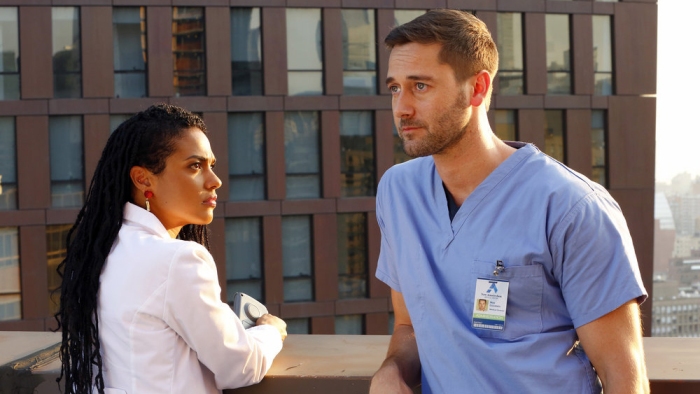 I loved the story line, even if it’s too far fetched that a hospital would be able to do what ever they wanted. I absolutely loved how Max came in and changed everything around for the doctors and patients (including renting a homeless man a house). He has made such a big impact and I can’t wait to see season two.

The show deals with all sorts of important topics, from being transgender to infertility. From social and political issues to drug misuse. These are all vital topics that should be covered but aren’t always depicted in the right way.

I hope you enjoyed my review! Have you watched New Amsterdam yet? What did you think?

Ramblings Of A Neurotic Writer I'm a book blogger, tea addict and traveler writing about my adventures.
Published April 9, 2019April 9, 2019