Should we want to feel good

You get depth instead of tips.

What makes someone pay 20,000 euros for a wristwatch?

Why are animal rights activists breaking into chicken farms and making a video?
Why does a young person gamble away all his pocket money in an amusement arcade?

The reasons may be different.
The wristwatch is a noble piece of culture that you would later want to bequeath to your son.
Someone has to bring the screaming injustice of the tortured chickens to the public.
Because it's the only thing that I enjoy.

"Everyone has something that drives them", is a current advertising slogan.
But what is it that drives him?
The answers sound diverse.

Bear responsibility.
Do my duty.
Help other people.
To own the coolest smartphone.
Don't eat animals.
Punish the unbelievers.

It's always about values.
Values ​​like power, status, being good, doing the right thing - or just having fun. 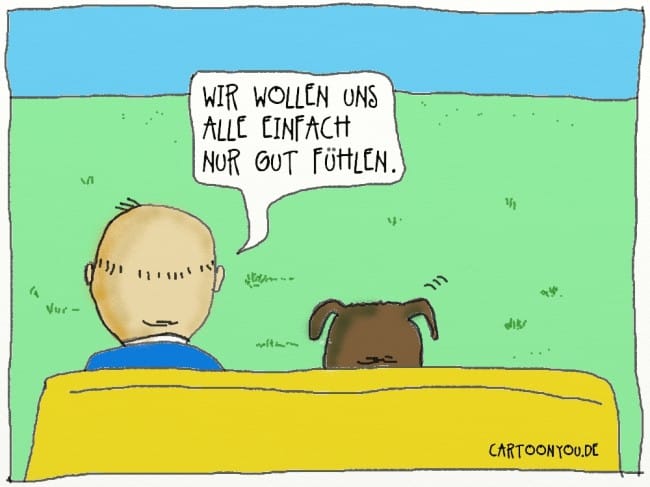 But ultimately, it's about just wanting to feel good about what we're doing.

One of them sells his car in order to make his contribution to improving the climate.
The other buys a new car that consumes an average of 20 liters per hundred kilometers.
The motive is the same, the means differentiates them.

"Yes, but that's not right"is the objection to some actions. And already we are in the moral debate.

Nobody does it right.
In the sense that everyone likes it.
Even Nelson Mandela couldn't do that.
Because there is no such thing as good and bad. At most, dividing up according to this is evil.

Because right and wrong don't really exist either.
At most from a certain perspective, within a system with narrow limits. For example, your own thinking, which you consider normal or reasonable. An ideology or a belief that is believed to be a natural law. Or given by God.

The more insecure someone is, the more vulnerable they are to a system with clear rules. That tells you what is good and what is bad.

But one motive unites us all.
No matter in which country. Which religion. What gender.

We just want to feel good about what we're doing.
And with what we fail to do.

One needs the new iPhone 6 for this. The other renounces everything that has eyes. And the third an explosives belt.

Fortunately, we can choose what makes us feel good.
In theory at least.

And what do you need today?

... or write a comment.
... or subscribe to my Sunday newsletter using the form at the top left.