Associative arrays are one of the most important uses for search algorithms and search trees. Before we explain this in detail, however, we want to take another look at the data structure triangle from the first lecture, which can be illustrated very nicely using the example of associative arrays. We show it again here: 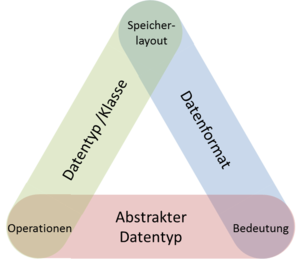 Recall that you have to choose two corners of the triangle in order to define a data structure. In the following we will show how Python defines the abstract data type "Associative Array" by specifying the permitted operations and their meaning, how the standard data format "JSON" is defined by specifying a memory layout and the meaning of the stored entities, and how efficient Implementation of the specified operations with the appropriate memory layout in each case, the data structure can be implemented in different ways.

Definition of the abstract data type

Associative arrays can be used just like normal arrays, so they support read and write access via the index operator. In contrast to the usual array, where the indices are whole numbers in the range

must be, the type of the indexes can now any be. We use the term "key" for this:

A typical application is a dictionary

In this case is the type of key. This is the most common case in practice, which is why associative arrays are often called Dictionary (also in Python, here the type is called). In general, however, any type can be used as a key that meets one of the following requirements:

If more is known about the key (an order relation or a hash function instead of a mere identity check), one can use correspondingly better data structures (search trees or hash tables instead of sequential search) whose access functions are much more efficient (sequential search is only possible in O (N) ).

In addition to the two access functions above, there are three additional functions in Python: one to test whether a key is present, one to delete a key and the data stored under it, and one that determines the size of the array (number of keys stored / Value pairs) returns:

if a.has_key (key): # Test whether key 'key' exists del a [key] # Remove key 'key' and associated data from the array print len ​​(a) # Output size of the array

The syntax of the functions listed applies to the use of an associative array. If you want to implement such a data type, you have to provide the corresponding functionality as methods of the respective class. The Python interpreter automatically transforms the index / key access as well as the and operators into calls to the respective method, as the following table shows. The complete definition of the meaning of the individual operations (as required by the data structure triangle) also includes the specification of the behavior in the event of an error (e.g. if a requested key does not exist).

Due to the definition, it is clear that each key can only appear once in the array. The definition of the abstract data type "associative array" allows us to implement such arrays in a wide variety of ways without changing anything in terms of usage (i.e. how the array functionality is called later).

The second edge of the data structure triangle is the "data format". This is where you define the memory layout and meaning. A data format is primarily used to save data on the hard drive and to exchange data between different programs or websites. In the case of associative arrays, the JSON format is becoming more and more popular because it is simple and yet powerful. It is very suitable for storing associative arrays (i.e. key / value pairs) and also supports normal arrays and hierarchical structures, because the values ​​can in turn be (normal or associative) arrays.

The memory layout of a JSON file is defined as a byte sequence that is interpreted as a character sequence according to the UTF-8 standard. This has two advantages: on the one hand, the format is compatible with all common systems and is the same everywhere; on the other hand, every JSON file can be easily opened and edited in a text editor and is equally easy to read for people and machines.

A meaning is assigned to a given memory content in JSON with the help of a grammar. A JSON file contains either a normal array or an associative array (dictionary):

An ordinary array is written as a sequence of one or more elements, separated by commas and enclosed in square brackets (characters enclosed in single quotes in the grammar must be explicitly in the JSON file). Empty arrays are also allowed:

Similarly, a dictionary is written as a series of key / value pairs separated by commas and enclosed in curly braces. Empty dictionaries are allowed. The keys must always be strings followed by a colon:

Strings are character strings (including some special characters such as "\ n" for a line break) enclosed in double quotation marks, or the empty string:

Values ​​can be numbers (whole or real numbers, defined as in Python), Boolean values ​​('true' or 'false'), strings, or 'null'. In addition, arrays and dictionaries can be used as values, which results in hierarchical data structures nested at will:

Here is a simple example of a JSON file that contains excerpts from a student database:

The JSON format is syntactically very close to the Python language, and with a few definitions it can be converted directly into a Python dictionary or array using the function.

One should, however no way because a hacker could execute arbitrary code that he had previously smuggled into the file 'test.json'. Since the function only checks whether the expression is valid Python, but not whether the file contains valid JSON (i.e. only data, but no executable code), this cannot be recognized or prevented. Therefore you should always use the Python module json to read in JSON, which would simply reject a manipulated file:

If only an identity comparison is made for the keys

is defined, there is no way to speed up the key search using a special data structure. You then simply store the key / value pairs in an ordinary array that you search sequentially. To do this, we first implement an auxiliary class that accepts key / value pairs:

The array class stores the pairs in an array, the current length of which is the size of the associative array. This defines the memory layout of the class:

In order to access the data, we have to look for the right key. To do this, we implement the helper function that returns the index of the key or, if the key does not exist:

When inserting an element, we first have to check whether the key already exists and then either overwrite the data or add a new element:

The search, on the other hand, throws an exception if the key was not found:

The other required functions are just as easy to implement:

Because of the sequential search, access to an element in this data structure has the complexity O (len (a)).

Realization as a search tree

If an order is defined for the key type of the associative array (i.e. if or are supported), the indexing problem can be reduced to the search problem. Then the associative array can be implemented efficiently as a self-balancing search tree, so that the access functions only have a complexity in O (log (len (a))). The data structure of the search tree must be expanded so that the associated data is also saved for each key. The node class is therefore extended by a "value" field:

Then you can implement a class whose constructor initializes an empty search tree:

The function checks whether an entry with the relevant key already exists. If so, its data will be overwritten with the new data, otherwise a new entry will be created. The already known functions and are used internally for this purpose (see section Search trees):

(A more skilful implementation would of course eliminate the second call to and set the data straight away in. However, this does not change the complexity of the function.) The function also searches for an entry with the given key. If it is found, it returns the associated data, otherwise an error message:

When implemented with a tree search, the index operations have a complexity of O (log n).

An important example of an associative array implemented in this way is the C ++ standard class.