What do wider tree rings mean

Every year, from spring to autumn, the cells under the bark of a tree divide anew - an annual ring is created. And it contains a lot of information, because not all annual rings on a tree are created equal. If it is warm, the tree will grow stronger than if it is cold. If it is dry, it will grow less than if it rains a lot.

These differences can be read off particularly well in trees that grow at the tree lines, for example in the high mountains. "For example, it becomes too cold above the upper tree line for trees to grow there. There, cold years are usually expressed in narrow annual rings. And this pattern is not only present in one tree, but in many close to the tree line", explains Jan Esper, head of tree ring research, called dendrochronology, at the University of Mainz.

Such a climatic edge area is also in the far north of Finland. There are ideal research conditions there, because the dendrochronologists can not only analyze living trees: dead wood also preserves this information like a climate archive. "In Finland we have a lot of shallow lakes. If a tree falls into a lake there, it will remain in perfect condition for thousands of years," says the Mainz researcher. So he and his colleagues were able to reconstruct the climate of the last 2000 years with Finnish trees. 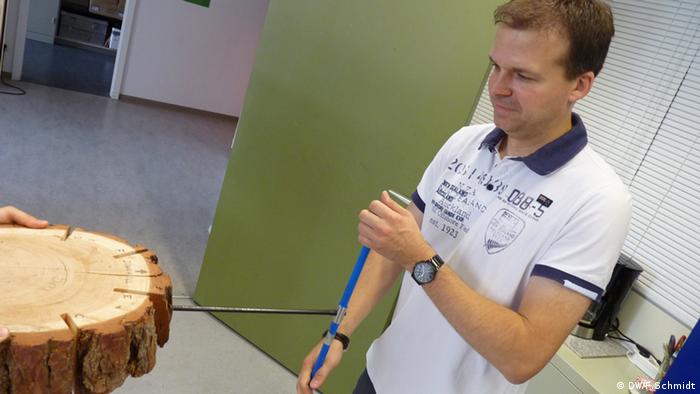 With muscle power to the tree test

Markus Kochbeck, head of the research laboratory in Mainz, demonstrates how a wood sample is taken from a tree. To do this, he places a core drill on a tree trunk. It looks like a pipe and is turned by hand. A lance is used to get the drill core out of the pipe afterwards. The core looks like a curled pencil and is about half a centimeter thick. Each ring marks a year of life for the tree. Next, Kochbeck glues the drill core onto a wooden support and then smooths it with a special planer. This creates a fine surface: all the annual rings are clearly visible.

Next, the drill core is placed under a stereo microscope, which is coupled to a so-called X table. "The table is equipped with electronics," explains Kochbeck, "and the annual ring is measured by the movement of the table." In this way, the scientist creates a curve: the years are listed on the X axis and the tree ring widths in millimeters on the Y axis.

From the microscope to the computer

One curve is created for each drill core. The researchers then superimpose many curves on the computer, at least a hundred. You can then use the concise years in which it was particularly cold and the rings are particularly narrow to date the samples. And because the researchers study many trees that lived at different times, they can develop a continuous timeline. To do this, the life cycles of individual trees have to overlap each other by a few decades. In this way, the researchers find similarities between trees of different ages. 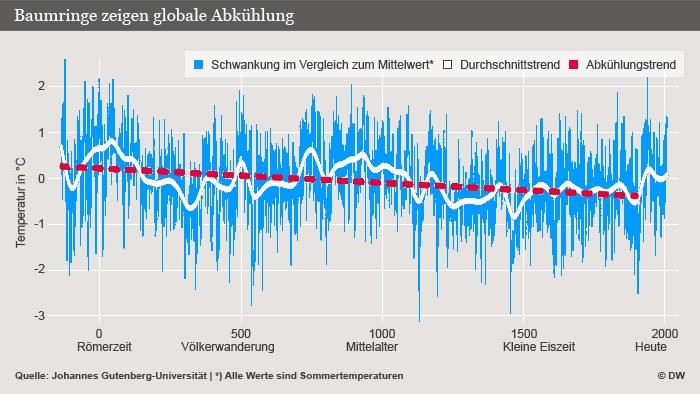 Such similarities can be found primarily on the basis of the coldest years in contemporary history, because then the rings are particularly narrow. "You then use this to try to superimpose the curves," says the researcher. This can be done either visually with the computer mouse or mathematically with the help of a correlation.

Finnish researchers have even managed to look 7000 years into the past in this way. Jan Esper did not go back that far in history with his experiment, but only 2000 years, but he refined the results with another technique. He measured not only the width of the annual rings, but also the density of the cells in the wood with a special X-ray device. The advantage: he was able to obtain even better climate data. "The tree ring density measurement measures the cell wall thickness of the last or penultimate cell row within a tree ring. And the cell wall thickness is a better indicator of summer temperatures," he emphasizes.

The result of the measurements: In the 2000 years before the start of the industrial revolution up to around 1900 it became colder and colder in Finland, by 0.3 degrees Celsius per millennium. He did not include the time after that in the calculation, because from then on a new phenomenon sets in: the increase in greenhouse gases. 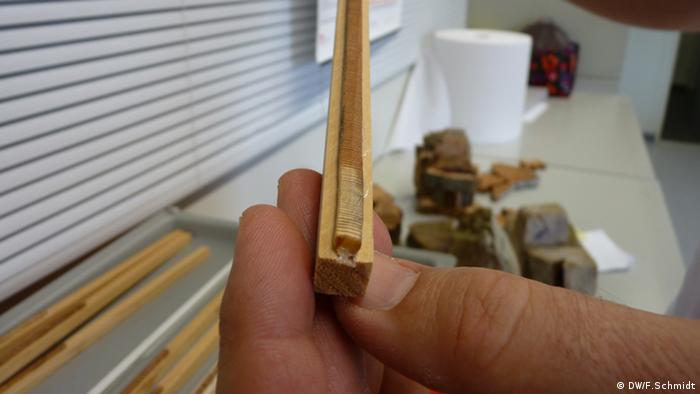 Researchers measure the layers in the drill core and examine their density in an X-ray machine.

The Finnish tree rings also revealed other climatic events to the researcher. Volcanic eruptions can be read from the climate curves. After these events there is a cooling of about 0.7 degrees Celsius. Warm and cold periods can also be identified: In Roman times it was very warm, as was the so-called medieval climate optimum, a warm phase in the Middle Ages. This is then followed by a colder phase, the so-called Little Ice Age. In the 20th century it got warmer again.

The research results could also offer something for the climate modelers who are trying today to predict the climate of the future. Because the data come from a time when there was only a little CO2 in the atmosphere. In this way, they provide information about natural climate change - without human influence.