What is the right of inheritance

What is inheritance law?

In Germany, inheritance law is a fundamental right that is anchored in the Basic Law. Exact regulations can be found in the § 1922 to 2385 of the BGB. This right makes it possible to dispose of property in the event of one's own death. At the same time, inheritance law entitles people to receive an inheritance, i.e. to inherit it. The beneficiaries are determined by law in the succession, unless there is a will or inheritance contract and contains other provisions. Statutory heirs, however, always have a right to a compulsory portion of the inheritance. They can only be disinherited in rare special cases.

How are heirs determined in the event of death?

Tip: You can find all details on the subject of succession here.

Rights and duties of the testator

What does the future testator have to consider?

If the testator wants to determine the distribution of the inheritance, he can do this by means of a will. This must be handwritten written and signed with the date. Nevertheless, this so-called testamentary freedom is limited by the law. Only people and legal entities can inherit. In addition, the next of kin are always entitled to a compulsory portion.
This also applies Giftsmade in the years prior to the death. This is where the beneficiaries of the compulsory portion are protected. They are entitled to the compulsory portion being supplemented by the value of the donations. The later the donation is made, the greater the claim.

Rights and duties of the heirs

What do the heirs have to consider?

As heirs, you have certain rights and obligations that are laid down in inheritance law. The heirs of an estate are entitled to the To turn down inheritance. This is possible within six weeks of becoming aware of this. Turning off inheritance can be important because any debts are inherited as well. The heir is fundamentally liable for all liabilities arising from the inheritance if he does not reject the inheritance.
In addition, as an heir, you are obliged to Inheritance tax to pay. The inheritance taxation, which was introduced uniformly in 1906, is based on the degree of kinship. The exempt amount to which the heirs are entitled is highest for the closest relatives and decreases with decreasing degree of kinship. The allowance can vary widely. Spouses are entitled to 500,000 euros, for example, fifty times the allowance for nieces and nephews. 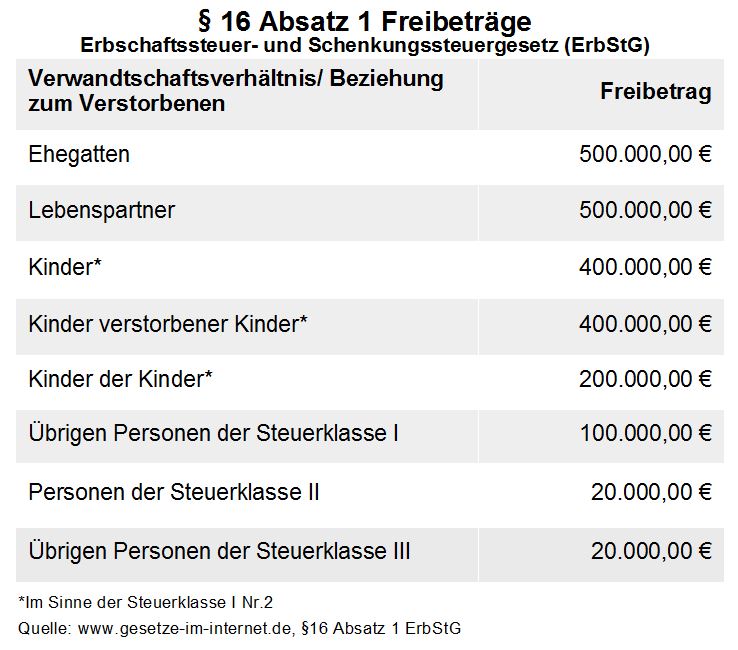 Origin of the right of inheritance

How did inheritance law come about?

For a long time there has been a kind of Family inheritance law applied, thus ensuring that the property of the deceased remained within the immediate family. Today it is assumed that people of higher social rank also increasingly had an influence on the whereabouts of their legacy themselves.
Since the fourth century, the Roman rule Testamentary freedomthat everyone had the right to decide for themselves what to do with their property after death. The inheritance regime changed in the Middle Ages. The church promised salvation in return for a large donation; an innovation that came into conflict with family inheritance law. But it was only with the decline of the church's influence that inheritance law was able to re-establish itself within family circles.
Please note that the above information is only intended to provide you with an initial overview of the subject of inheritance law and is not a substitute for legal advice.

Inheritance law - information on inherited personsRating of this page: 4.6 out of 5 points. 0 (31 votes)
Do you find this page helpful? You too can give your rating by clicking on the stars.
(1 star: not very helpful, 5 stars: very helpful)
<?