How can you justify Pro Choice

After the election is before the election. That is not meant politically at all, although the bon mot actually comes from there. The decision-making process does not stop with the choice: Every decision creates pressure to justify itself, because sooner or later we will be confronted with the question: Why did you decide this way and not differently? Your own choice blindness stands in the way. We like to talk things over nicely so as not to look like a fool. Here you can find out how choice blindness develops and how you can deal with it ... 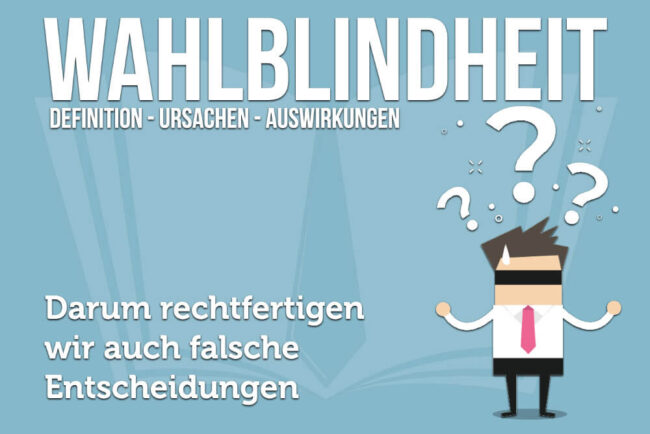 We usually make decisions for ourselves. The importance of external justification is often underestimated. Benjamin Scheibehenne from the University of Basel examined this: he presented test participants with a list of charitable associations and institutions and asked the test subjects whether they would be willing to donate one euro. The participants were divided up and could choose between five, 40 and 80 clubs.

Half of the participants should also justify their choice. The question: Why do you want to donate exactly for this project? Effect:

The fear of having to justify - and perhaps not being able to - led to greater caution. Behavioral economist Aner Sela from the University of Florida also shows the influence of justification. He presented test subjects with different types of ice cream: classics such as chocolate and cream, but also sorbets with fruit and low-fat diet varieties. You already guessed: if the participants had to justify their choice, they chose the healthy options.

The very thought of having to justify the choice influences our decisions. We have to decide with a view to the external impact - and have a good reason to hand.

There is also an exciting experiment by psychologists Lars Hall and Petter Johansson from Lund University in Sweden, which impressively demonstrates the full extent of self-manipulation: Let's assume you could choose between two potential partners. As a result, however, you would then be bonded with the person you did NOT choose.

Would you notice? "So, please: What kind of stupid question is that supposed to be?" You are probably thinking. Of course you would notice! If the partner is blond instead of brunette as chosen, maybe it was not that obvious in the experiment. Even more amazing: even when the test subjects noticed that the partner they had chosen in the photo had changed strangely, they thought their choice was spot on. They even began to justify the partners in front of others.

The researchers later gave the phenomenon the name "Choice Blindness"; in German one also speaks of election blindness. In short, this means: We often do not even notice when we have made a mistake. And if we do notice it, we are reluctant to admit the error and speak to ourselves (and others) about it correctly. With that in mind, please ask yourself why you have been doing the job for so long, with which you currently earn your money, but are somehow not happy ...

Cognitive dissonance: When choice blindness becomes an obsession with justification

At its core, we want a world free of contradictions. We find contradictions deeply uncomfortable and difficult to bear. In technical jargon, one speaks of cognitive dissonance. This negative emotional state arises when we are confronted with incompatible perceptions, thoughts, opinions, attitudes, wishes or intentions. This is also the case if after a decision we believe or experience that the other choice would have been better. Or when our radiant self-image has got a few scratches.

This is often shown on the Internet. If your own comment is corrected by others or a mistake is noted, it is unbearable for many. The reaction: Instead of admitting the mistake, it goes into forward defense. One barrel after the other is opened - the main thing is that you are right somewhere. In line with election blindness, we insist on our decision.

Examples of justification and choice blindness

Most people notice such U-turns (and sometimes also critically question them), but afterwards the world feels much better. Perhaps there is no plausible explanation for the sudden change of heart. But which solution is perfect? In politics and at work, however, such maneuvers are not without danger. If you hit too many 180-degree hooks, you lose a lot of credibility. In addition to this rather transparent method, there is a second option: downplaying and derogating.

This can be seen regularly in smokers, for example. When asked about the health consequences of smoking, they like to counter: Life is generally dangerous; you might as well be run over by a car tomorrow. In any case, the likelihood of developing cancer is nowhere near as high as everyone has claimed, because there are enough really old smokers. And anyway: what about Helmut Schmidt? He'd been smoking chain for twelve-twelve years and didn't die of lung cancer either!

It is similar with choice blindness at work. You're not stuck, the promotion just comes a little later. Of course, you knew that you often had to work overtime and made a conscious decision to do so.

In short, we are never at a loss for an excuse when it comes to minimizing cognitive dissonance and justifying our decisions to ourselves.

The desire for absolution

We want to receive absolution from our fellow human beings. All the justifications with which we adorn a choice, and no matter what reasons we give, have only one goal: to get our own decision confirmed. The action serves as a sedative pill. But why does confirmation from others mean so much to us? Usually three motives play a role:

Justifying one's decisions (including through election blindness) can therefore have contradicting effects. On the one hand, it influences the choice in the first place - not necessarily for the better. On the other hand, it ensures that we feel more comfortable overall with the decision made.

A justification should never become an excuse. Perhaps you want to limit the damage after a wrong decision - but the effect fizzles out and turns into the opposite. The self-declaration becomes a self-revelation. It is actually embarrassing.

Both-and instead of either-or

Quite often we still have to live with such contradictions. The danger in this is therefore different: because such contradictions leave us unsatisfied, we want a simple solution. Fast. Right away. But this sometimes leads to real wrong decisions. Cognitive dissonance forces us into an either-or attitude:

Behind this is digital thinking (zero or one), which makes us overlook the fact that both options can sometimes coexist. Some apparent opposites are not mutually exclusive, but can complement each other wonderfully symbiotically, doing one thing that the other cannot do.

The tight corset of either-or becomes an airy both-and. Compromises are typical for such decisions, which therefore do not necessarily have to represent a middle path in the sense of a fifty-fifty solution. An 80-20 result can also help to combine the best of both options and to satisfy our demands as much as possible. That is - admittedly - easier said than done. But that's not impossible.

Three recommendations against voting blindness and for better decisions can already be derived from the findings so far: