Are you ever anywhere near Washington DC? 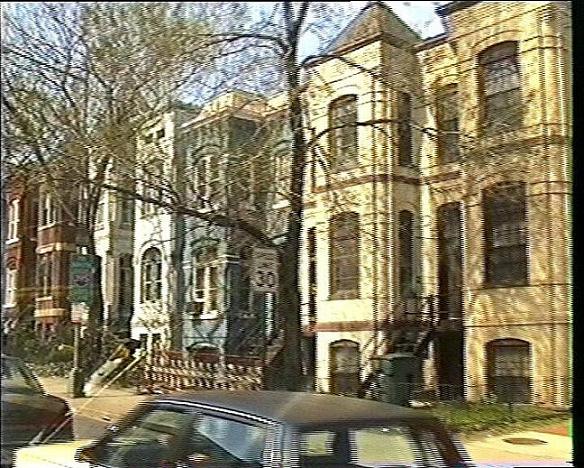 It started early in the morning at 6:00 a.m. We were picked up in a small bus in front of the hotel and since we were the last guests, we started straight away, first across New York and then through a tunnel out of the city and onto the interstate in the direction of Washington. At dawn I see the Manhattan skyline on the right, the two towers of the WTC tower above everything. Who would have thought at the time that we would miss these towers so much on our next visit to this gigantic, exciting, always drowning in noise and yet fantastically beautiful and above all varied city ...

On the way to our destination, we get a lot of information from our driver. He's Argentinian and started his own business in New York with his son and he knows a hell of a lot about it. He also tells us about the Amish people who run their farms near Philadelphia, Pennsylvania and lead a completely different life than we are used to, when we are at the height of Philadelphia. I found it very interesting and, on one of my next visits, I would like to have a closer look at it. Today we are only taking a short break on the interstate, because unfortunately there is not enough time for more.

When we arrive in Washington after about 4.5 hours, we see some beautiful old, small houses at the entrance to the village. These were no longer inhabited until they were simply "confiscated" by the poorest in town. If you managed to drive them out of one house, they fled into one of the others and so, slowly but surely, the windows and doors of all these houses are bricked up and they should be torn down as soon as possible. A shame and, in my opinion, a shame to then razed something so beautiful to the ground. 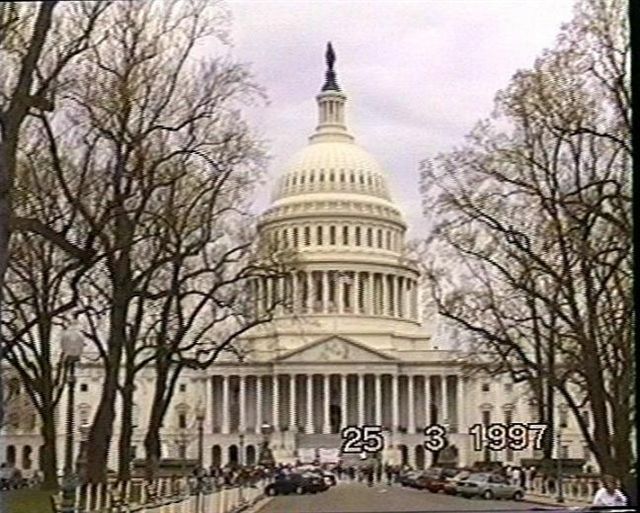 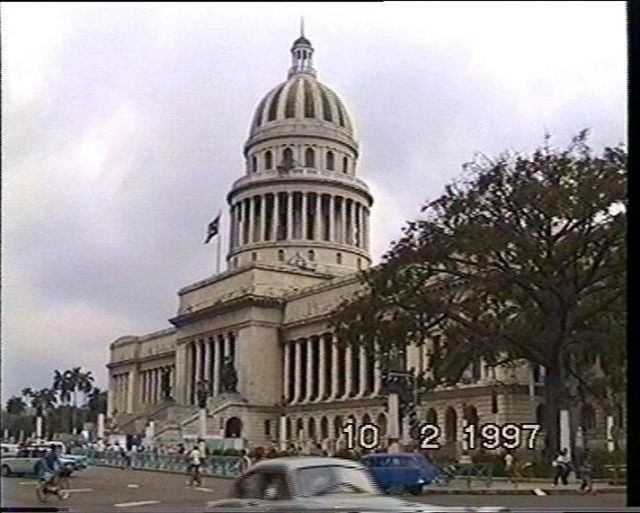 Then finally we go to Pennsylvania Avenue and in the distance you can already see the Capitol (left) and there we meet our tour guide who will accompany us during our stay in the city.

So now I am standing in front of this huge Capitol and I feel a bit strange, because less than 2 months ago I was standing in front of the replica of this building (right) in Havana / Cuba and the surroundings there were nowhere near as magnificent as the one here in Washington and somehow anger comes up in me, because the way the Americans behave towards the Cubans, that can definitely not find my approval.

We go through a side entrance (our tour guide knows the security officers and we don't have to wait in line) into the Capitol and here, where the Congress, consisting of the House of Representatives and the Senate, is at home, I'm amazed more out. Pictures, statues and paintings as far as the eye can see. I especially like the decorations inside the large dome. I really didn't expect that. 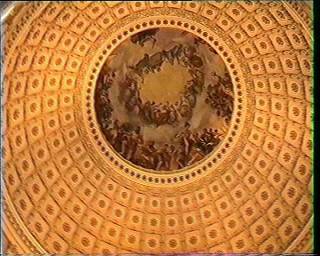 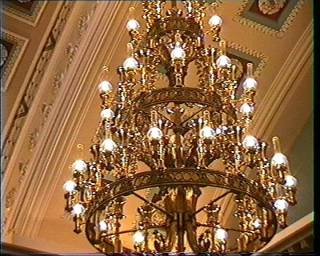 We continue through the government district, which is built entirely of sandstone and marble, whereas in the old town, the Georgetown district, you will find whole streets with houses made of red brick. Many cafes, bars and restaurants can be found there and here we take a break to eat. 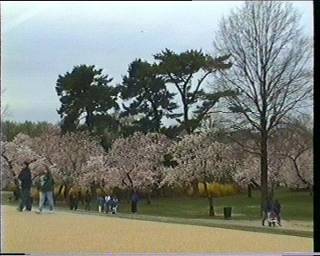 I see many parks and here are growing hundreds of Japanese cherry trees, which are now in full bloom, a wonderful picture. Then we come to Lafayette Park at the end of the small park where we could see "The White House" for the first time. I didn't want to believe it at first, it looked like you know it from TV, but it felt much, much smaller to me, and there was a high, green fence (for security reasons) that also blocked our view .

There is a small street between Lafayette Park and the white house. There we met a Spaniard (she is from Galicia) who pitched her "tent" there and has been protesting against everything that has to do with the USA since 1981 (!). She just looks impossible and scolds Mc Donalds and Coca Cola and the icing on the cake was, she handed out flyers that read in large letters that the White House was the largest brothel in the world ...

The White House in Washington DC 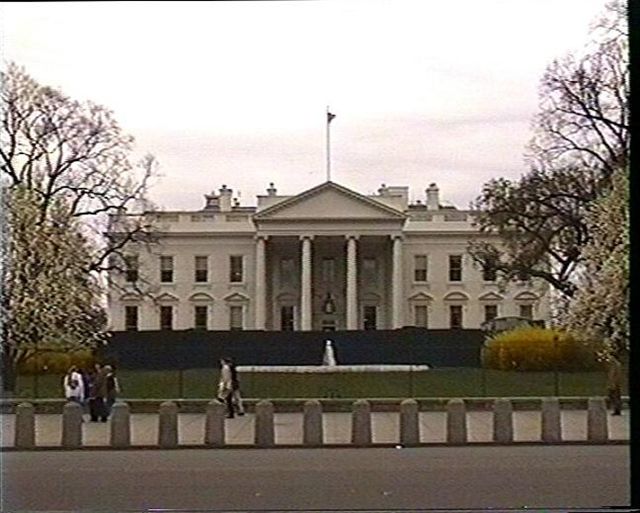 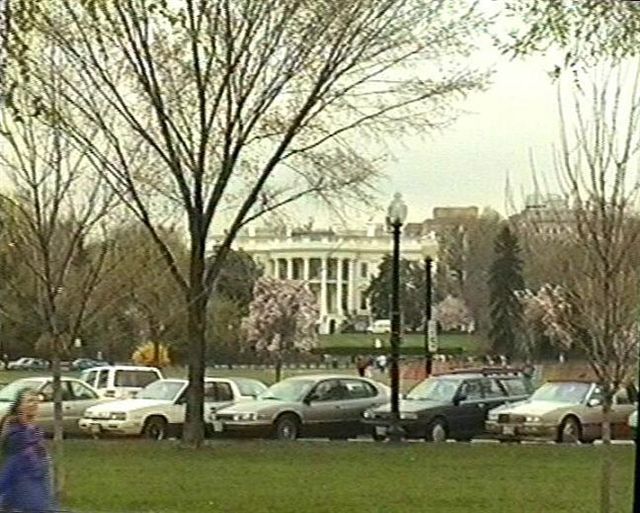 Well, I thought I didn't see right, I was really pissed off and spoke to her. I told her that I really like to drink Coca Cola and also like to eat a Big Mac and I asked her if she even knew what she was doing. She also got loud and cheeky. I told her that there is also freedom of expression in Spain, but she should try to stand in front of a Mc Donalds in Madrid, claim the same thing and insult the Palacio de la Moncloa (= the Spanish white house), then At least she knows how much freedom this country gives her here, although she scolds so much about it, because in Spain she would certainly be arrested at least once temporarily. In order to avoid further outbursts of anger from this thunderstorm goat, I just left.

I take my hat off to people who speak their minds and fight for freedom, but you should always "leave the church in the village" and, in my opinion, not behave like that.

I am very happy that I can live in freedom and I think we should all be very careful with our freedom, because if one day we have to do without it, it will be too late. 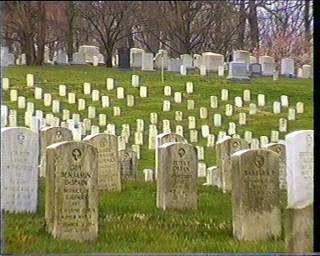 We continue and we drive over the Arlington Memorial Bridge to one of the most famous cemeteries in the world, the Arlington National Cementery. This is where one of my first "idols" found its final resting place. This is the grave of the 35th President of the United States of America, shot by John F. Kennedy on November 22, 1963 in an assassination attempt in Dallas. 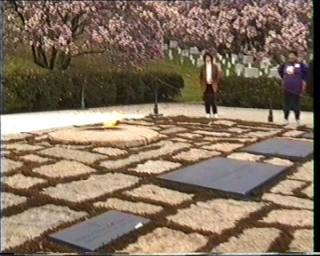 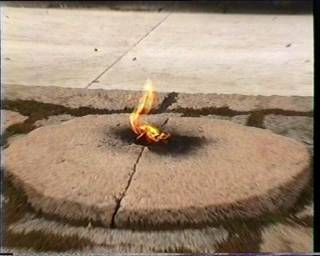 I remember it as if it had been yesterday evening ... I was only 11 years old myself and was allowed to watch my aunt's favorite TV show (we didn't own a TV yet) 8:15 pm "We can laugh." the show that I liked so much and it was later and later, there was only the test image and now and then a display that read "We are expecting an important message from America and ask for your patience" shortly before 9:00 pm Then came the sad news of JFK's murder. Although I wasn't interested in politics back then, especially after his famous speech in front of the Schöneberg town hall, JFK was probably the only politician I "wanted to know something about" and who had now been murdered. I was very, very sad and only a few years later did I realize that I (and the whole world) had to be grateful to this man, even though the trade embargo against Cuba introduced under him in early 1962 does not meet with my approval, there is one thing I will never forget , because through his prudent actions in the Cuba crisis at the end of October 1962 he definitely prevented World War III. Now I stand here at his grave and thank him with a silent prayer. 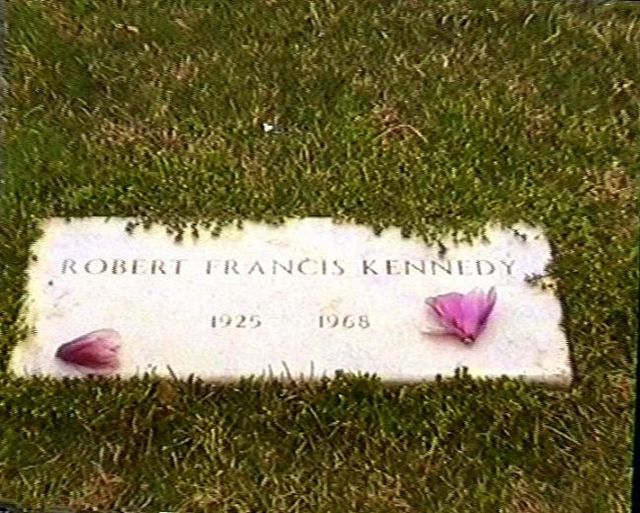 There is a small platform near the tomb and all around is a small marble wall in which was carved what he said in his inaugural address as 35th President:

On the way back we see the grave of JFK's "little" brother Robert (Bobby) Kennedy, which is right next to that of his big brother. He, too, was assassinated during his (pre) election campaign for the presidency.

I wonder if we will ever find out the exact circumstances surrounding the murders of the two Kennedy brothers.

We're going back and now we're coming to the Lincoln Memorial. From there we can see the obelisk that stands at the end of an artificially created lake and in the extension we can see the Capitol again at the very back. 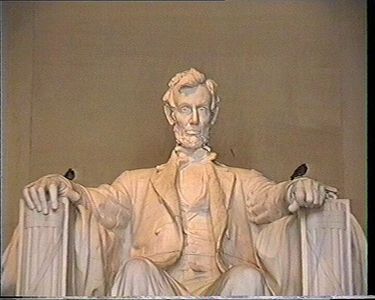 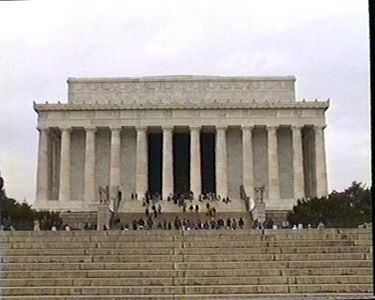 The Vietnam Veterans Memorial is located very close to the Lincoln Center and over 50,000 names of soldiers who died in the Vietnam War are carved into a long, large wall made of dark granite stone. There is also a memorial with three young American "Vietnam soldiers". 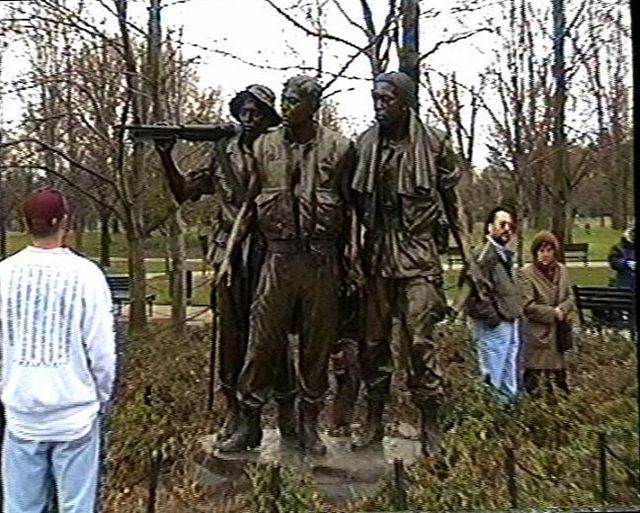 I've never seen a monument that looks this real. At another place, 3 female soldiers have been depicted in a memorial and 8 trees have been planted around them. The trees symbolize the 8 female soldiers who died in Vietnam. Nothing against this memorial, it doesn't help the soldiers anymore, but at least there is an official memory of them.

I wonder, however, whether there is a memorial somewhere in the world for the many innocent Vietnamese who lost their lives in this senseless war.

Our bus driver then had a free ticket for each of us to enter the National Air and Space Museum in Washington. I'm not very interested in aviation, but it really wasn't uninteresting. There we saw, among other things, one of the 12 original lunar shuttles from the Apollo program. The Spirit of St. Louis, with which Charles Lindbergh was the first person to fly alone from New York to Paris in 1927, can also be seen there. 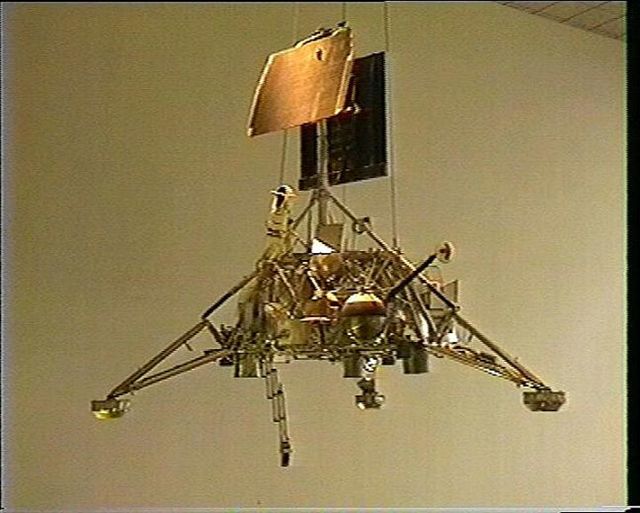 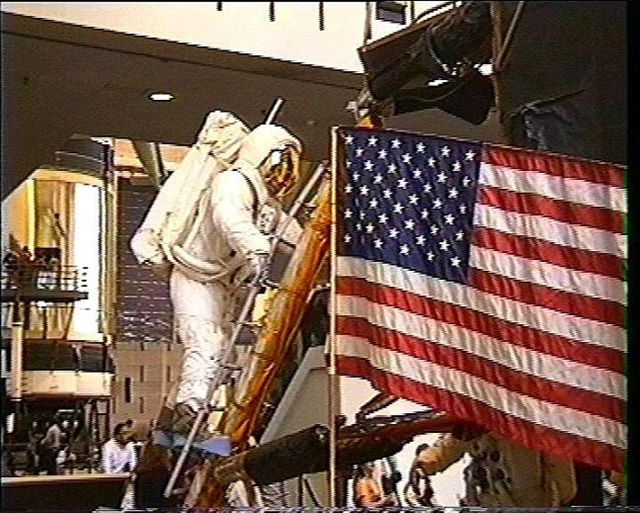 I was looking for him for the German in Washington and I had almost given up hope when I saw him in the front yard of the "National Academy of Sciences" and out of the moving bus, I still "caught" him.

It was only a day trip from New York, but we saw a lot. Even if we mainly stayed in the "government district". It was worth it for us and on our next visit we will get to know the other "quarters" better. 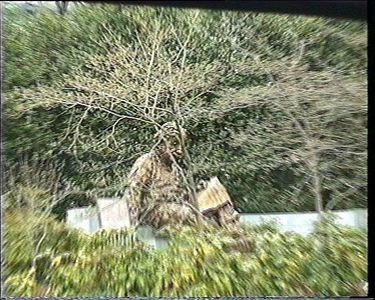 Hidden behind the bushes and yet found, the statue of Albert Einstein.

Now it's back to New York. I have reserved a table in the Hotel Mariott Marquise, in the revolving restaurant "The Views", with a wonderful view of the Big Apple. This is where we will eat tonight. Today is my wife's name day and at midnight we will toast my 45th birthday.

The visit to the hotel (the atrium with the glass elevators is awesome) and the "rotating tower" are worthwhile, the view from up there is wonderful. The food, however, was miserable and far too expensive and the worst that we were served during the entire trip. (and I write that, although we also ate at Mc Donald's.)

Tomorrow morning we go to Boston and from there tomorrow evening to Las Vegas.

If you like my travel reports, you are a member of Facebook and you want to recommend them to your friends, then you are welcome to do so here.
Thanks a lot for this!