What are gyri gyrus 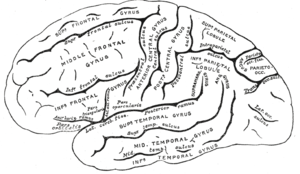 The outer surface of the left hemisphere

The medial surface of the left hemisphere

The Gyrus (Plural Gyri, (Latinized form of Greekγύρος, jíros or [ˈjiːrɔs] "round", "bend", "round", "hem", "edge", here in the sense of "curl") is a term from the surface anatomy of the brain. It represents a convolutions of the brain protruding from the brain mass.

The individual gyri are through Fissures (Furrows) and Sulci (Trenches) separated from each other. Through these structures, the principle of surface enlargement is realized in the cerebral and cerebellar cortex.

The formation of the gyri on humans takes place as early as the 24th week of pregnancy (SSW), and complete gyration is usually achieved by the 32nd week of pregnancy. The brain surface of a newborn is about 679 cm², of which about 61% is within the sulci. When the gyri are fully developed in adulthood, their number increases and the surface of the brain increases to about 1600 cm².