Why do speakers make static noise

Static noise from speakers when the computer is turned off

I have a pretty old set of Creative speakers called the Inspire 2.1 2400. 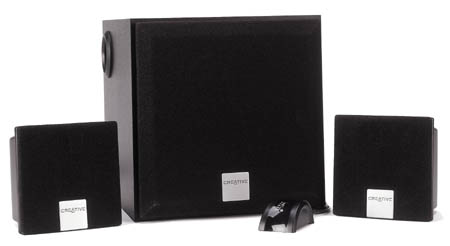 Since then, I've been getting static noise when the computer is off, so I have to turn off the speakers along with the computer, which is a hassle.

I blame the new cable, but I don't know how to choose a cable that doesn't cause this noise.

Edit: After the answers and comments here, I did some more tests.

By the way, my mother has an identical set of speakers and she has the same noise problem.

Edit2: The noise can be described as hum. It's very similar to the 50Hz example.

Typically, this noise occurs when the computer and speakers are at different floor levels (see explanation here). Are you sure that you have not changed anything in this regard, different points of sale etc.? Is your PC connected to other devices, antennas, network switches, etc.? Try using an extension cord to connect the speakers and the computer to the same electrical outlet.

Very strange behavior, apparently something is wrong with the cable or the speaker system. Is it a hiss or a low hum?

Sounds to me as if your new cable acts like an antenna and you absorb the static from there. Try a cable with a thicker shield / insulation and see if that helps.

(Every time I had a problem like this it turned out to be.)

When you turn off a computer, it is not always completely turned off, but rather in "standby" mode. Has a USB lamp ever been connected to your computer? Did it stop when you turned off your computer? How about the lights on the back for your network card? (Some have lights there!) Are they off too or is a network wake-up call supported? Leave the cable connected to your speaker, but unplug it from your computer. If there is still noise, the problem is with the cable. Otherwise, the computer is still making noise even though it is supposedly turned off.

Since you added more comments to your question, a second answer ... just plugging the cable into your speaker, as I said, will create more noise than usual. That seems to me to suggest that the cable works like an antenna, picking up random signals and sending them to your speaker. If your mother uses the same speakers and cables and lives in the same area as you, there may be something in the area that is causing the signals being received by your speakers. Connecting the cable to the speaker will reduce this signal as it is now separated by the computer and speaker.

You may need a cable that is better isolated from these external signals. I'm not a great expert as I've never had so many problems. You may be near a GSM broadcast antenna and the cable is picking up random interference. To check this, wrap the cable in a single layer of aluminum foil and see if the noise subsides a bit. Or connect the cable to a speaker in another room. In this case you will need a newer cable with better insulation. (No, you don't want to wrap the cable in foil!) However, such a newer cable can be expensive. And it's not a guarantee that it will work any better. Therefore it may be better to turn off the speakers with the computer.

At home I have a power switch next to the socket that turns the socket on and off. I prefer this power button to turn off my computer as it turns off the other devices on my desk as well. (Monitor, boxes, external hard drive, printer.) This may be the simplest solution in your case. :-)

It could be that the audio cable is too close to the electrical cables. When you connect the cable to the computer, although it is switched off, it is somewhat shielded from external influences. However, the PC is still receiving power, so you can hear these noises. (Try unplugging the computer with the audio cable attached at both ends.)

I suspect that the old "bad" cable had a ferrite bead in the volume control and it was filtering out that noise. Either that and / or you routed that cable differently than the other.

I had the same problem and fixed it by moving my wifi router further away from my subwoofer. I'm not sure why, but it fixed the problem.

What soil are you connected to?

Are your electrical outlets grounded?

No underground can cause this type of problem as you can become more sensitive to outside noise.

"Static" noise is not a hum, but a scratchy noise with different amplitudes and frequencies.

50/60 Hz induced hum from power supply is possible according to the description, but differs greatly from the "static" described.

On the other hand, it is quite possible that the noise will persist after disconnecting the amplifier, as the capacitors in the circuit will hold the charge for some time after turning it off, operate the amplifier at a reduced level and possibly amplify the induced noise or the noise of the plug resistance .

If this noise lasts for more than about ten minutes, it is unlikely that it was coming from the disconnected amplifier (and that the amplifier is actually turned off?) And likely being caused by a nearby source such as a switching power supply or an input noise.It is possible, but unlikely that metal dust gets caught between the magnet and the cone.

Quick entry if no one has found the same solution. A roommate of mine used a lamp that had some kind of crazy power consumption / radiation and high power wiring that I used for a very large sound system picked it up. Trust me when I say the simplicity of solving has been more frustrating than the problem at hand. I literally tried every form of grounding, swapping cables etc and then just reproduced the last environment when the system was working fine (all lights were off during a house party) and a nondescript, nasty lamp. I'm not sure if this is true, but maybe it will help someone else. Cheers.

We use cookies and other tracking technologies to improve your browsing experience on our website, to show you personalized content and targeted ads, to analyze our website traffic, and to understand where our visitors are coming from.

By continuing, you consent to our use of cookies and other tracking technologies and affirm you're at least 16 years old or have consent from a parent or guardian.