Because of pure insectivores: spiders do not shy away from vegetarian food, as researchers have found out. When it is convenient, they also eat pollen, drink nectar or nibble on the leaf tissue of plants. And that is by no means only true for a few exceptions: representatives from ten different families also regularly have vegetarian food on their menu.

So far, spiders have been regarded as classic carnivores: the eight-legged predators either lurk in their webs for prey or go hunting themselves, like many tarantulas, for example. The females of some spider species, including the notorious black widow, do not even shy away from cannibalism and eat their mating partners after sex if they do not escape in time.

However, Martin Nyffeler from the University of Basel and his colleagues have now shown that the spiders are by no means pure carnivores, as previously assumed. On the contrary: The animals like to supplement their menu with vegetarian food. An evaluation of previous studies and observations shows that representatives from ten different spider families regularly have vegetable foods on their menu.

“The ability to obtain nutrients from plants expands the nutritional basis of these animals,” explains Nyffeler. “This could be one of their survival mechanisms in order to survive times when insects are rare.” In addition, the vegetable accompaniment to the insect snack ensures that the spiders absorb a greater variety of nutrients - this is also an advantage in the fight for survival. 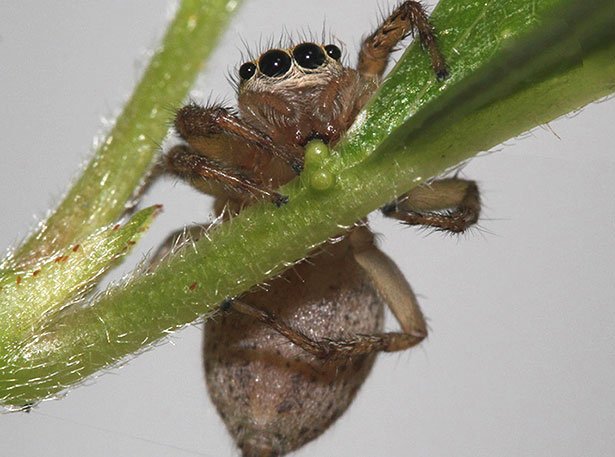 The taste of the spider is quite varied: Depending on the species, the menu includes nectar, sap and honeydew, and sometimes leaf tissue, pollen and seeds. These plant parts can come from trees, bushes, grasses, ferns or orchids. The quantitative extent to which the vegetable diet forms part of the spider's diet is still largely unexplored.

But one thing is clear: the vegetarian excursions of the spiders are a global phenomenon. As the researchers found, this feeding behavior occurs on every continent except Antarctica. However, it seems to be more common in warmer regions. The reason for this could be that spiders often drink nectar as a supplement - and tropical plants produce a lot of it.

The jumping spiders have a particularly pronounced tendency towards vegetarianism, as the researchers report. This group of around 600 species accounts for up to 60 percent of all known cases of herbivorous spiders. (Journal of Arachnology, 2016; doi: 10.1636 / P15-45.1)