How are objects petrified

The collection item of the quarter 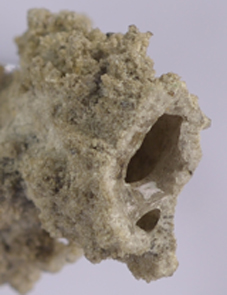 Flash tubes - or Fulgurite (from Latin fulgur: "Lightning") - occurs when lightning strikes rocks. They are so to speak “lightning bolts turned to stone”. In the process, tube-like structures up to several meters long and about 2 cm in diameter are formed, which are hollow on the inside and often branch out at the ends. Due to the high energy of the impact, material is thrown out of the interior of the resulting tube. The cavity is thereby formed.

A petrification of lightning takes place so rarely that the Leipzig professor of physics and chemistry LW Gilbert said around 1800 that he considered fulgurite “by far the most interesting and greatest natural curiosity that […] perhaps any collection of curiosities from the mineral kingdom possesses . “Flash tubes were so special for a long time that they were given to kings like Friedrich August (the Righteous) of Saxony in 1822 as gifts. The “little Ararat” on the border between Turkey and Armenia is a specialty. Its andesite summit is almost perforated by lightning and has even been given its own rock name: “Fulgurite andesite”. Well-known geologists and natural scientists, such as Alexander von Humboldt and Charles Darwin, have already dealt with fulgurites. The first mention of alpine (Mont-Blanc) Fulgurites was made by Horace-Bénédict de Saussure (Thalheim 1992).

It is often not easy to distinguish between fulgurites and other tube-like geological phenomena such as the burial tombs of living things. In Leiningerland, more precisely in the municipality of Battenberg (Rhineland-Palatinate), pipes that were mistaken for fulgurite were incorrectly elevated to a natural monument. Later it turned out that their origin was not due to lightning strikes, but to weathering and erosion. The other way around, Fulgurites are occasionally not recognized as such and, for example, as around 1800 in the Silesian County of Oels, they are referred to as "Osteocollis" ("broken leg stones"). The pipe-like structures, which often look like bones, were traced back to underground glass rivers. The error was not corrected until 1817 (THALHEIM 1992).

The world's longest flash tubes are to be found with a length of 5.40 m in the Lippisches Landesmuseum in Detmold and with 4.60 m in the Senckenberg Natural History Collections in Dresden. At around 15 million years old, the latter seems to be the geologically oldest known lightning tube. The Dresden tube is composed of over 100 individual parts and serves as a replacement for a 4.67 m long tube that was lost in the kennel fire on May 6, 1849. The largest collection of Fulgurites apparently has a German collector from the Lower Rhine. Other sites include the Libyan Sahara desert or the banks of the Rhine near Oesterholt and Augustdorf as well as in the Black Forest.

By the way: It maintains collections in Berlin and Hanover, here in cooperation with the State Office for Mining, Energy and Geology (LBEG). They are among the largest geoscientific collections in Germany.

To the catalog of the collection objects