What is taurine in energy drinks

Fanta and Cola are out. With young people today are more likely Energy drinks and colorful beverages in a shrill can design are trendy. What the youngsters tip into themselves is anything but recommendable. 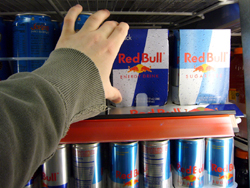 The classics "Red Bull" and "Flying Horse" have always been joined by new fashion drinks at breathtaking speed. It has long ceased to be a question of a quick supply of energy - what matters is what arrives. First and foremost, young people are the addressees of the cool drinks. In the meantime, however, there are also extra products for drivers such as "Full Speed" or "Formula 1", drinks for computer freaks, e. B. "Power Point" or "CyBer" for staying power when surfing the Internet at night. The British "love bomb" is supposed to get the libido going, and anyone can imagine what "erectus" should do. "XTC" or hemp extracts offer the attraction of the forbidden, but without intoxicating effect.

According to food law, these fashion drinks are caffeinated soft drinks such as lemonade and cola. The actual energy drinks are also included as a subgroup. In addition to caffeine, they often contain ingredients such as taurine, inositol and glucoronolactone, for which certain maximum quantities apply. In addition, they provide lots of sugar or sweeteners. With a sugar content of around eleven percent, the drinks do not differ from normal soft drinks. In addition to a name that is as unusual as possible, plant extracts such as mate or guarana, various aromas and colors ensure that the drinks are different from each other. The sweet-tasting myo-inositol, which is also often found on the list of ingredients, is said to increase memory performance and burn fat. The substance plays a role as a membrane component and can be produced by the body itself. Scientists are not aware of any additional effects on metabolism.

Most trendy drinks taste artificially sweet and are reminiscent of liquid gummy bears. But the taste is secondary. What counts for young buyers is the outfit: the more elaborate the can design, the more flashy the color and the more dubious the origin, the better. Therefore, drinks from the supermarket are not in demand, but those that can be bought with a click of the mouse on the Internet, in discos and trendy bars or at petrol stations. The price hardly plays a role. Without the blink of an eye, a 250-milliliter can costs two to three euros and more.

Energy drinks must be labeled with the statement "increased caffeine content" and the amount of caffeine in milligrams per 100 milliliters. From December 2014, the warning “Not recommended for children and pregnant or breastfeeding women” must appear on all beverages with a caffeine content above 150 milligrams. In addition to the cans from the supermarket, this also applies to the serving of energy drinks in restaurants or discos. Red Bull bypasses these regulations. The new 60 milliliter energy shot was not introduced as a caffeinated soft drink but as a dietary supplement and contains the same amount of caffeine and taurine as a normal Red Bull can in a highly concentrated manner.

Strong as a bull - thanks to taurine?

Taurine can be found in almost all designer drinks - probably because nobody really knows what it is. Aminoethylsulfonic acid, its scientific name, is the biogenic amine of the amino acid cysteine ​​and, in addition to sulfate, represents the final stage in the breakdown of sulfur-containing amino acids. In addition, as a component of bile acids, the amine plays a role in lipid metabolism. It is discussed whether taurine is also active as a neurotransmitter in the brain and whether it enhances the effects of caffeine. Our organism synthesizes up to 125 milligrams of taurine every day. In addition, between 40 and 400 milligrams per day are ingested with food. The additive approval regulation allows taurine to be added to energy drinks by 4000 milligrams per kilogram. It has not been scientifically proven that taurine increases performance, as repeatedly claimed by the providers - at least not independently of the effects of caffeine.

Nothing but cold coffee?

The addition of caffeine is also said to increase performance. Energy drinks made in Germany contain a maximum of 320 milligrams of the stimulating substance per liter. In other words, there is a good 80 milligrams in a can (250 ml), about as much as in a cup of coffee (150 ml). Caffeine has a stimulating effect on the central nervous system, pulse rate and blood pressure rise. At the same time, the adrenal glands produce more norepinephrine and the basal metabolic rate increases. Excessive caffeine consumption leads to inner restlessness, irritability and difficulty concentrating. Sensitive people suffer from palpitations and dizziness.

For healthy adults who are used to coffee consumption, around four cups of coffee spread over the day are considered harmless. That corresponds to about four cans of an energy drink. If you drink the caffeine drinks to quench your thirst during the sweaty permanent dance in the heated disco, it can lead to an overdose. Especially since children and adolescents have a lower body mass and therefore the tolerable amount of caffeine is significantly lower. Circulatory breakdowns in discos have already occurred. In the meantime, the warning is mandatory to drink such drinks only in limited quantities. However, this tip should be seen as a challenge by many kids. The same applies to the warning against alcohol consumption at the same time. Rather, the drinks are often offered mixed with alcohol. “Vodka Energy” is such a popular trend drink in the discos.

Energy drinks are pepped up with glucuronic acid

Another typical ingredient in energy drinks is glucuronic acid, which is usually added in the form of lactone. Manufacturers advertise that this compound helps detoxify the body from environmental pollutants. In fact, activated glucuronic acid is involved in the detoxification reaction in the liver. However, it is produced in sufficient quantities in the metabolism. The energy drinks may contain a maximum of 2400 milligrams of glucuronolactone per liter. For comparison: The tea drink Kombucha has up to 3500 milligrams of glucuronic acid per liter.

Energy drinks are also spiced up with vitamins, especially vitamins B1, B2, B6, B12, vitamins C and E, because the drinks are supposed to make you fit and improve performance. The new "Red Bull Energy Shot" contains 170 percent of the recommended daily dose for vitamin B6 and 140 percent of the recommended vitamin B12 intake in just 60 milliliters. What is the point of such concentrations remains a mystery.

Additive cocktail can be harmful

From a nutritional point of view, the sweet additive cocktails clearly cannot be recommended. It is still unclear how larger amounts of caffeine, taurine, glucuronolactone and myo-inositol affect, especially in combination with one another. What is certain is that some of the dyes such as quinoline yellow (E104), azorubine (E122) or brilliant blue (E133) can be of concern for people at risk of allergies. From an ecological point of view, the shrill drinks get a big minus, as they are only available in cans and disposable bottles.

The Federal Institute for Risk Assessment (BfR) does not classify the energy drinks as safe. The effects and interactions of taurine and glucoronolactone in combination with caffeine have not been researched well enough. In particular, there is a need for research into the connection with simultaneous physical activity and alcohol consumption. The Federal Ministry of Food, Agriculture and Consumer Protection (BMELV) recently initiated a research project on this.

Since they have already led to circulatory collapse, energy drinks should be consumed with great caution. Strict prohibitions are usually of little help. Factual education about the artificial and expensive designer drinks is certainly the better way.