How many moons does Uranus have

As far as we know today, Uranus has 27 moons. Four of them are more than 1,000 kilometers in diameter, the other moons are much smaller. In 1986, the Voyager 2 spacecraft reached the planet Uranus and found eleven new moons that were previously unknown to us. And even more recently, new moons have been discovered, the last in 2003 in photos taken by the Hubble Space Telescope.

The moons of Uranus were not named after legendary figures from Greek mythology, as is common with the other members of the solar system. Characters from the works of the great English writer William Shakespeare were chosen for the names.

The four largest Uranus moons Ariel, Umbriel, Titania and Oberon move around Uranus at about these distances.

There are 12 other moons between Uranus and Ariel, of which Portia, Puck and Miranda with diameters of 135, 162 and 472 kilometers are the larger. The rest are less than a hundred kilometers in diameter. They weren't found until 1986 by the Voyager 2 spacecraft. 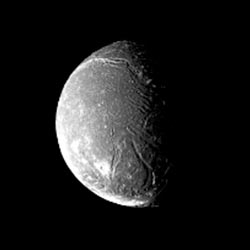 Ariel consists of half of rock and half of ice. Its surface consists, on the one hand, of many craters and, on the other, of rift fractures that are scattered all over the place. These valleys are believed to have arisen because Ariel's crust expanded and tore open in many places. The rifts are often hundreds of kilometers long and up to 10 kilometers deep.

The name Ariel comes from a work by Alexander Pope. In his verse epic 'The Robbery of Curls', an air spirit called Ariel appears. 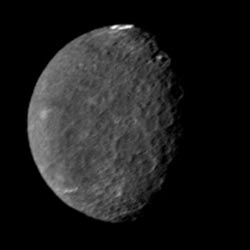 Umbriel is also an ice moon and about half consists of rock and ice. Its surface does not seem to have changed much in billions of years, except that new craters have been added every now and then. It is heavily cratered across the board. There are no rifts like on Ariel here.

Umbriel was named after a gloomy wight from Alexander Pope's 'Locke Robbery'. 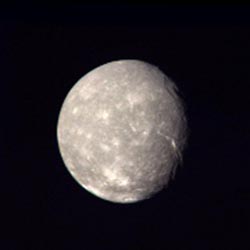 Almost six years after the discovery of the planet Uranus, Wilhelm Herschel also found its two largest moons, Titania and Oberon. Titania is 1,578 kilometers in diameter and moves around Uranus once in 8.7 days.

Titania consists of roughly half each of rock and ice. Its surface is covered with craters. There are also canons, deep gorges, some of which are hundreds of kilometers long.

The moon takes its name from the elf queen Titania, who plays in Shakespeare's work 'A Midsummer Night's Dream'. 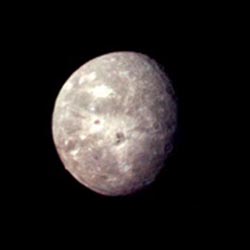 With a diameter of 1,523 kilometers, Oberon is the second largest Uranus moon. It takes 13.5 days for one orbit around Uranus.

Oberon consists of roughly half each of rock and ice. Its icy surface is littered with craters and thus appears to be very old. The largest crater on Oberon is 206 kilometers in diameter. Many large craters are surrounded by bright impact deposits and radiation systems composed of relatively fresh ice. There is still unknown dark material on the crater floors.

Since the surface is closely paved with craters, it can be assumed that hardly any geological activity has taken place. The temperature fluctuates between -193 ° and -203 ° Celsius.

The Elven King Oberon from William Shakespeare's 'A Midsummer Night's Dream' gave the moon its name.

And another 23 moons of Uranus

Between Uranus and Ariel, the innermost of the four large Uranus moons, there are 12 other moons, some of which are tiny. The larger of them, Miranda, was discovered by Gerard Kuiper in 1948. Everyone else found the Voyager 2 spacecraft in 1986. 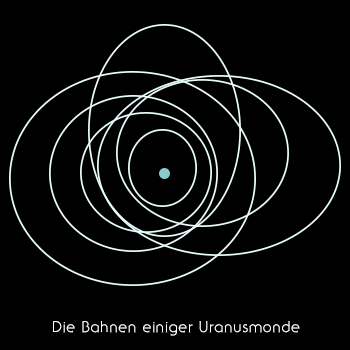 Behind Oberon, the outer one of the large moons, there are at least 9 other small moons. They were only discovered between 1997 and 2003. Their orbits are very unusual. Eight of them orbit Uranus 'backwards', i.e. against the general direction of travel in the solar system. Their orbits are partly very elliptical (see illustration).

They were likely once members of the Kuiper Belt and were captured by Uranus in the early days of the Solar System.

The images on this page are from NASA (Courtesy NASA / JPL-Caltech).