When colors are not colorful - About color vision disorders

Color blindness is often used flippantly as a swear word if, for example, it takes too long to wait at the traffic lights for the person in front to drive off. But it is more than just an insult. It is a serious disturbance in color perception that makes it impossible for the viewer to perceive colors. He only sees contrasts. This disorder is officially listed as a "disability" and is very rare (only one in 100,000 people is affected).

Much more common, however, is the color impairment »red-green visual impairment« in various forms, which is often incorrectly referred to as »color blindness«. This, in turn, is widespread, especially among men, and is always inherited. Usually everyone knows someone in their immediate environment who suffers from it - more or less - but looking for someone affected for this article via social media failed terribly. The most widespread advice was either that "you know someone who has it" or "that my customers have it for sure" or they moved completely into the mob corner ("Ask a dog!" - referring to the Long-held assumption that dogs can only see black and white, which is now considered obsolete.) But I am not defeated that easily and that's how I came across Matthias Stäheli, who gave us an insight into everyday (work) life with a Color ametropia.

What color vision disorder (if known) do you suffer from?

When did you first notice the visual impairment?

I only really became aware of my poor eyesight when I was about 7 years old in a color test; After just a few pages, the numbers depicted on it disappeared into colorful, wild patterns, in the shapes of which I recognized all kinds of things; however, the ophthalmologist saw only numbers. My parents, on the other hand, noticed my poor eyesight in my childish drawings, since I always used the same color for tree tops and tree trunks; whether green or brown, I didn't care. I also saw no problem in painting a blossom green. 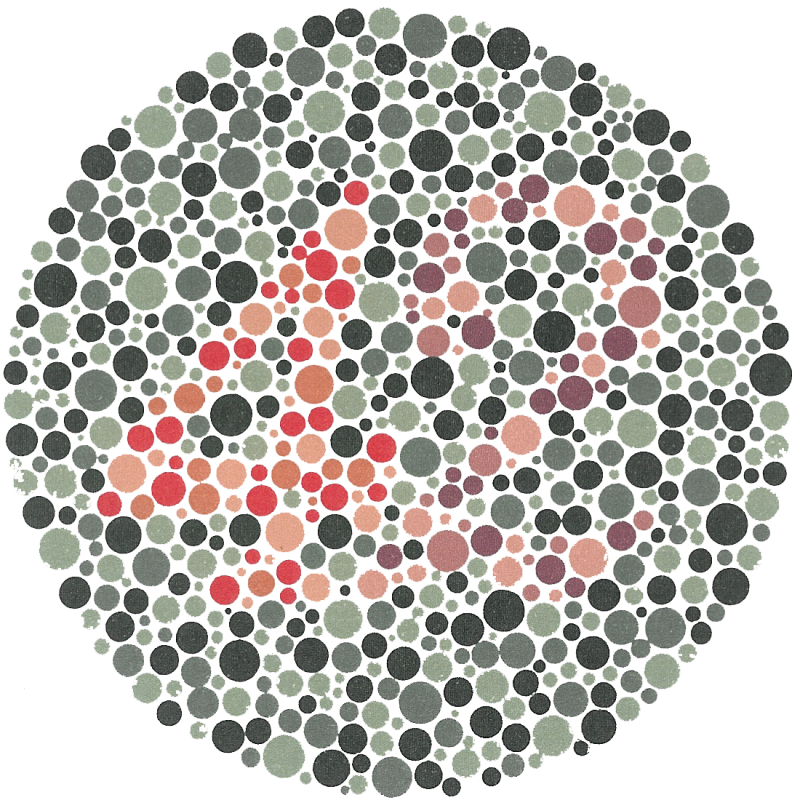 My search for someone "affected" was not at all satisfactory. Unfortunately, no one had contacted me, so I had to assume that color blindness was not something one would like to admit. Do you think that's the way it is? Is that a stigma?

I like to believe that. After all, when you have a lot to do with design, colors do not play an insignificant role. Many also react extremely surprised that a “color blind person” can even be a designer by profession, which provokes a certain shyness among those affected.

I myself do not use the term "color blind". "Red-green poor eyesight" is more precise and at the same time also softer. In principle, as a person affected, I can see all colors, only I especially perceive red as a color that is not as dominant as others do.

How does your color vision disorder manifest itself in everyday life or do you even notice it yourself?

I notice it every day, often while surfing the Internet.

The round dots next to the description "Availability" are a good example of online shops; is the little point now green - i.e. the product is available - or is it red - i.e. sold out? Why is it not written next to it? I can usually only guess the color.

On spring vacation in Tuscany, we're driving our car, someone shouts "Wow!" Look over there on the right! «. I look to the right, don't see anything special. "Well, the bright red poppy field!" Now I can see it too, in all its splendor - only the field of flowers didn't jump straight into my eyes. The same thing often happens to me with various flowers that have red flowers - I have to look for them to see them. The early spring with its many green buds on the trees also likes to pass me by.

Another example are traffic lights at night. Red and yellow like to mix into one, the green lights are so bright that they resemble the white car headlights.

Or when a form asks me about the color of my eyes - I look in the mirror every day but spontaneously don't know it.

How does your »poor eyesight« influence you in your work as a designer?

Before I started my apprenticeship, I asked myself whether I could meet the demands of this profession - and yes, I definitely am.

My experience shows that dealing openly with my poor eyesight is of great benefit. If I apply as a freelance graphic designer at a well-known agency, I usually don't mention this weakness in the first conversation. But before I can start designing at the latest, I have to get rid of this “burden” in order to be able to work carefree and focused on the topic. And once I have achieved the goal of being invited to an interview, my own work seems to have already convinced me or my poor eyesight has not been noticed negatively. In the end, every client has accepted my poor eyesight with a short smile, and once it was revealed to me that my counterpart was exposed to the same problems.

I like to compare the whole subject with the type of professional qualification. If your work is convincing, it is usually no longer relevant whether you have completed conventional vocational training or a design degree. In the end, what is important is what good work and ideas can be presented. Here, the color visual impairment does not necessarily have to have negative effects. As a designer, those affected even have the advantage that they have to pay more attention to contrast, shape and composition. And he trains his eye to always look closely.

I mostly work for large customers whose color appearance is already defined by clear style guides. If this requirement is met, I do not see any impairment of my poor eyesight in my work / my layouts.

If I work for smaller direct customers (which for various reasons seldom happens), I fall back on my network of graphic designers who are friends, with whose help we can achieve a coherent color scheme together. And if I work for myself - I am a passionate screen printer - the more interesting color combinations are usually the result; I mix colors that are sometimes indefinable for myself, the results have surprised many who have no visual impairment.

However, there are clear boundaries that I cannot and can never cross on my own, either in the digital or in the analog. A classic example is the print approval in the print shop with color fans; I have absolutely no chance of differentiating between slight, deviating shades of color from target and actual. With a color visual impairment one pays less attention to the colourfulness than to the contrast of different colors, which in the case mentioned does not differ visibly in the two colors.

In the digital world, it is the fine color corrections of disturbing color tones in photos that make me despair. Removing a shade of red that cannot be recognized as such is almost impossible. Likewise, it is more difficult for me than others to build up a coherent color scheme from scratch. Although I can usually tell whether colors harmonize with one another or not, evaluating an existing color climate is known to be easier than actually creating it. However, if you consciously address these problems, there will always be someone who will take on this task for you - and move on.

Also, with my red-green visual impairment, I will probably never be able to become the art or creative director of a company, but that is not my primary goal either - I prefer to be self-employed and also move my black and white, spherical KOTTON pieces forward bring to.

Ultimately, however, I would be very interested in how people without color visual impairment see things and the world - it has to be fantastic.

The word "weakness" has been used so often - I would like to counter this with a personal conclusion:
"I have red-green visual impairment - and am still successful as a designer."

The interview was conducted by Nadine Roßa