When did the genocide in Bangladesh end?

1971 was a bleak year for the people of what was formerly known as East Pakistan, now known as Bangladesh. Hundreds of thousands of farmers, fishermen, villagers and factory workers, as well as intellectuals and politicians, were killed in the war for independence. Women and children were tortured and raped. Countless houses across the country went up in flames. 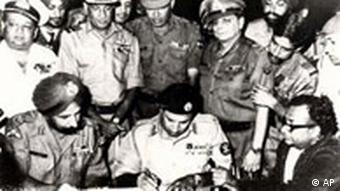 The wounds of the past can only heal when those responsible are held accountable, says Imtiaz Ahmed, Professor of International Relations at Dhaka University: "The stories of those directly affected are really very traumatic. If these stories come up in the process, it will be that promote the healing process. Because the victims, whose children perished or whose parents died, must experience justice. "

When British colonial rule in South Asia ended in 1947, the Bengal area was added to Muslim Pakistan. 24 years later, after nine months of bloody civil war, the country proclaimed its independence. The Awami League, the party that fought for independence, came back to power with a large majority at the end of last year. Many chose her because she had promised to finally bring war criminals to justice, says Imtiaz Ahmed. The pressure from civil society on the government is enormous. "The party knows that this is a difficult task and also a certain risk politically." Ahmed doesn't think the party can delay that. "The procedural process will start and will take time."

In order to meet the challenge, Bangladesh has asked the United Nations for support and it has already been promised. This is an important step, says Abbas Faiz, a South Asia expert at the human rights organization Amnesty International. He warns against acting too hastily because of public pressure: "This has to be done by people who have the authority and competence to do so." Gathering evidence is a huge task. Possibly too big for Bangladesh, says Faiz. "That is why it is very important that the UN is involved."

It is still unclear who exactly will carry out the investigations and who will be answerable in court. But the government of Bangladesh has already earmarked large sums in the budget for this.

When this first war crimes tribunal starts in South Asia, it will affect relations between Pakistan and Bangladesh, experts say. There will be discussions about the responsibility of the former Pakistan for the atrocities of war. Pakistan does not recognize the extent of the human rights violations that Bangladesh accuses it of and has so far not officially apologized. But Imtiaz Ahmed, an expert on international relations, is optimistic: "Once the process has started and it is conducted with openness and commitment, then both states have the chance to build a better relationship and no longer be trapped in the past . "

Many people in Bangladesh hope that as the process progresses, Pakistan will help investigate the human rights violations during the War of Independence.