The Weapons Act contains a long list of prohibited weapons with considerable penal provisions. We will introduce some of these weapons here in loose succession. 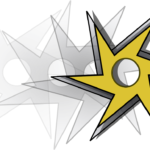 For example, who has a Throwing star acquires, owns, leaves, leads, spends, takes, manufactures, processes, repairs or trades in it, must with one Imprisonment up to three years or a fine calculate, § 52 III No. 1 WaffG. They are also known by the terms ninja star or shuriken.

So better take another look in your toy box.

The legislature makes it easy for you to recognize the throwing stars:

Handling the following weapons and ammunition is prohibited:
1.3.3 star-shaped targets which, by their nature and handling, are intended to be thrown at a target and capable of damaging health (throwing stars);

Read the Weapons Act and ask your lawyer or member of parliament about risks and side effects.

There is an official explanation of this regulation in the WaffVwV:

The definition of "throwing stars" is not based on a certain quality (metal) of the objects or a certain weight. Plastic throwing stars are also subject to the prohibition standard, provided they are likely to damage health.

Gears or z. B. Bicycle sprockets are not throwing stars. The prohibition becomes clear due to the obvious construction method or the dedication contained therein.

In individual cases, it may therefore be difficult to distinguish it from a toy.

For the accused, it is particularly problematic that, in our experience, the judges often do not trust themselves to be competent, but send the files to the police expert. And then it becomes dearly for the accused if the costs of the proceedings are imposed on him.