The employee of the Borussia Mönchengladbach press office, who had taken over the social media activities that evening, had to come up with some superlatives in the first half hour of the game in order to get the matter under control. "Incomprehensible!" "What a start!" "The next hit!" You could literally imagine the gasping breath with which this Twitter account was ventilated. After the 30 minutes, only emojis instead of words helped:

Once again it was Alassane Plea who made the foals dream at this point in the Champions League game against Shakhtar Donetsk. The Frenchman had opened the scoring in the eighth minute, contributed another goal in the 26th minute as if pulled on a string and was delighted when an own goal by Valeriy Bondar and finally Ramy Bensebaini led the hosts to 4-0 at halftime made clear.

Success can slip out of your hands

Should that be enough on this evening? In the circle of Mönchengladbach, they remembered almost traumatically that game against the "Royal" at home on the last day of the match, which also began very gloriously. For a long time they had clearly led and made Real Madrid look like a middle-class Bundesliga team (... nothing against middle-class Bundesliga teams, but that was Real!). And in the end, the Germans could be happy that their 2-2 draw did not completely slip out of their hands.

But that shouldn't happen to Borussia again here. After the change in the 65th minute, Lars Stindl made sure that the social media officer was able to pull out one of these beautiful short films again. "Tooor, Tooor, Tooor", written with lots of Os.

Conclusion at the end: 6-0 away win. Another conclusion: Borussia Mönchengladbach is the table leader in this group, which after the draw could be seen as an unsolvable task. In addition to Real, there are the big earners from Inter Milan on the scene. And even if it's not all day long: Something could go for Mönchengladbach in this Champions League season. 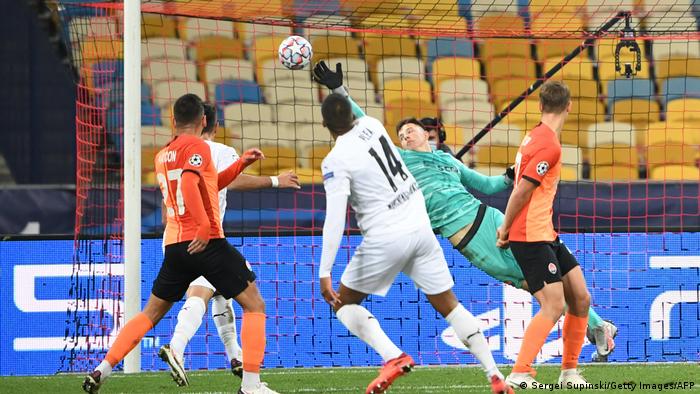 Shirt number: 14. Number of goals that evening: 3. Ukrainian goalkeeper Anatoli Trubin is not long enough when Alassane Plea is about to score his first goal

Those in charge are now feeling this and can look forward to the fact that the rumored 23 million euros transfer fee for Plea has now paid off since 2018. But it wasn't just Plea (who even contributed a third goal to the final score in Donetsk) that coach Marco Rose and manager Max Eberl celebrated that evening. "Today we did a lot right, not to say: almost everything," said a satisfied coach.

If you look at this Mönchengladbach team, you could go into raptures. Or into a kind of dream euphoria: The fact that they wore their white jerseys in Donetsk made the people of Gladbach look as if they were, and not Real, the "royal ones". And that in the city that is the center of the Donbass coal region. And with this information you would be back in reality in no time. Because last but not least, the Borussia know that a lot of footballing-malocher work will come their way if they don't just want to - dream their dream of happiness in the Champions League.