There is a youth vaping epidemic

E-cigarettes are sometimes seen as a lower-risk alternative to conventional cigarettes. In the meantime, however, there is increasing evidence that “vaping” e-cigarettes is also harmful to health - especially for adolescents and young adults. 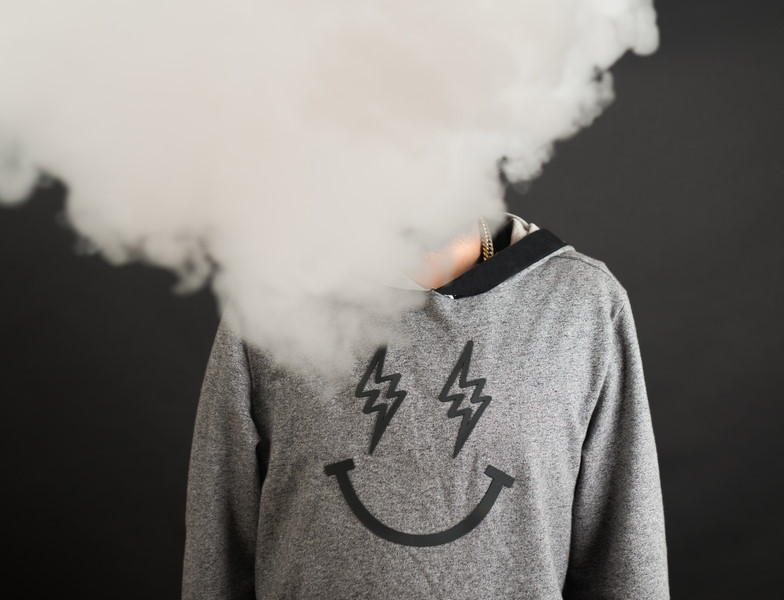 The lungs are a superlative organ. With every heartbeat, blood is pumped through hair-thin vessels, which together have a length of about 2,000 km. Around 300 million alveoli with a total surface area of ​​70 square meters take care of the vital gas exchange. "The lungs are a physiological miracle," states a research team led by Jeffrey Gotts.

Inhaled air is filtered and humidified before it hits the delicate alveoli. Particles such as dust, viruses and bacteria are carried back up through the mucous membrane of the respiratory tract. If too many pollutants are inhaled, the cleaning mechanisms of the lungs can no longer work properly, which can lead to infections and inflammations. In a review article, Jeffrey Gotts and his team explain the effects of e-cigarettes on the respiratory tract.

Wave of illnesses in the USA in connection with e-cigarettes

The issue of e-cigarettes has caused an uproar in both research and the media, not least because of the current wave of illnesses in the USA. Over the course of the year, over 2,000 mostly young patients with lung problems were admitted to hospitals. Symptoms include shortness of breath, fever, nausea, and vomiting. Some of those affected died as a result.

The US health authority CDC was able to detect vitamin E acetate in samples taken from the lungs of sick people. The CDC therefore suspects a connection between vitamin E acetate and lung problems and warns against filling e-cigarettes with liquids containing THC.

However, many different chemicals are contained in e-cigarettes and, according to the CDC, it cannot be ruled out that the current wave of illnesses has more than just one cause. Regardless of the current discussion, however, there is increasing scientific evidence that e-cigarettes have harmful effects on health even without THC.

Release of harmful substances in e-cigarettes

The liquid in the e-cigarette is heated until it evaporates. There is no smoke, but an aerosol made of fine and ultra-fine particles. The main component of the liquids is propylene glycol or glycerine. The liquids are usually also mixed with aromas, which are available in a wide variety of flavors. However, studies show that the aerosol contains some of the same toxic and carcinogenic substances as tobacco smoke, including formaldehyde, acetaldehyde, acrolein, lead, chromium or nickel. Although the measured concentrations are lower than for tobacco smoke, there is no threshold value for carcinogenic substances below which they can be regarded as harmless.

A study by Harvard University recently showed that many commercial liquids also contain endotoxins and beta-D-glucan. These are substances that occur in fungi and bacteria. Inhaled these substances can have a toxic effect and lead to health problems such as asthma, reduced lung function and inflammatory processes.

Studies on cell cultures and animals provide evidence of changes in the genes as well as inflammatory reactions and increased oxidative stress. Oxidative stress is triggered by the formation of so-called free radicals. Free radicals are molecules that are missing an electron, which makes them particularly reactive. They “stress” the cells in our body by snatching electrons from them. This can lead to inflammation and even cancer. Studies also found evidence that e-cigarettes activate certain enzymes that are involved in the growth of cancer cells.

Carcinogenic substances detected in the urine of adolescents

How the consumption of e-cigarettes actually affects health is not yet available from long-term studies. However, the current study situation shows possible health risks. In a study from the USA, for example, various toxic and, in some cases, carcinogenic substances were found in the urine of adolescents who consume e-cigarettes but do not smoke cigarettes.

Studies from the USA, Hong Kong and Korea have shown that adolescents who consume e-cigarettes often suffer from chronic coughs, bronchitis and asthma. Due to their design, the studies do not allow any conclusions to be drawn as to whether e-cigarettes actually cause respiratory diseases. The research team led by Jeffrey Gotts emphasizes, however, that all previous findings point in the same direction: Those who use e-cigarettes are more likely to have problems with their respiratory tract.

"Vaping" weakens the immune system of the lungs

According to Gotts and his team, it seems plausible that the vapor from e-cigarettes damages the sensitive structures of the lungs, making them more susceptible to infection and inflammation. Normally, a special mucous membrane called the ciliated epithelium is responsible for the disposal of inhaled foreign matter. Fine cilia in the mucous membrane move upwards in waves towards the throat. As a result, small particles such as dust particles or pathogens are transported out of the airways piece by piece until they can be swallowed into the stomach.

When “vaping” e-cigarettes, however, the mobility of the cilia decreases, so that the removal of particles no longer functions properly. This allows viruses and bacteria to colonize, which in turn can cause lung diseases. Chronic "vaping" can thus weaken the body's immune defense.

The problem is that e-cigarettes are enjoying growing popularity, especially among young people. In the USA in particular, high growth rates can be recorded. In 2018 alone, there was a 25 percent increase in the number of students among 12th grade students.

In this context, a manufacturer whose e-cigarette product is reminiscent of a USB memory stick in terms of its shape occupies a prominent position. 70 percent of all e-cigarette sales in the US can be traced back to this manufacturer in 2018. In the US market, the replaceable cartridges of this e-cigarette brand contain a comparatively high amount of nicotine. Due to a special technical manufacturing process, the nicotine contained would also irritate the respiratory tract less than other nicotine-containing e-cigarettes, which also favors the development of nicotine addiction.

Risk of switching to conventional cigarettes

In addition to the health risks of “vaping”, there is also concern about switching to conventional cigarettes. While a downward trend in tobacco smoking has been observed for years, there is a risk that this positive development will be undone by the increasing consumption of e-cigarettes.

Initial evidence confirms the assumption that adolescents who come into contact with e-cigarettes are more likely to switch to conventional cigarettes. A US longitudinal study with over 2,000 schoolchildren came to the conclusion that one year after the first survey, 20 percent of the young people who had previously only tried e-cigarettes also started tobacco smoking. The more often the adolescents had already smoked e-cigarettes, the higher the likelihood of tobacco smoking.

While fewer and fewer young people are starting to smoke tobacco, there is an increasing trend in the consumption of e-cigarettes. The sweet aromas are particularly attractive to teenagers and young adults. Although there is currently no long-term experience with the health risks of e-cigarettes, studies show that some of the same harmful substances are inhaled when “vaping”, albeit in a lower dose, as when smoking tobacco.

Previous knowledge suggests that the immune system of the respiratory tract is disrupted and the risk of lung diseases such as chronic bronchitis and asthma increases. In addition, there is a risk of switching to conventional cigarettes, especially among young people. “Vaping” e-cigarettes is therefore not a harmless leisure activity, warn experts on cancer and lung diseases in particular.