What is oversaturated solution 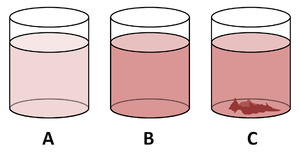 Oversaturation is the name for a metastable state of a solution or of vapor. Under normal conditions, such an excess of the equilibrium state would be prevented by a phase transition. In the case of oversaturated systems, however, this does not occur at the expected equilibrium point of the phase diagram. The temperature range in which oversaturation can occur is also known as the Ostwald-Miers range (after Wilhelm Ostwald and Henry Alexander Miers).

A supersaturated solution contains more of the solute than its solubility corresponds to at that temperature.

Elimination of the "too much" dissolved substance

Supersaturated steam has a higher density than steam in the thermodynamic equilibrium between steam and condensate. Especially with regard to water vapor in the air, if there are no condensation nuclei (aerosols) in the laboratory test (cloud chamber), a supersaturation of a maximum of approx. 800% is shown. Under atmospheric conditions, maximum supersaturations of 100% can be observed, with supersaturations of only a few percentage points generally occurring.

When steam is slowly cooled in thermodynamic equilibrium between steam and condensate, supersaturated steam is produced.

Decomposition of supersaturated steam using clouds as an example

Rain can be removed from undercooled cloud fields by “inoculating” with germs from z. B.

bring to excretion. This may be desirable to prevent hailstorms.

A widespread application, in which a wide Ostwald-Miers area is used, are hand warmers or heat cushions with sodium acetate trihydrate filling. It is liquefied at a melting temperature of 58 ° C, e.g. in the microwave. Even at temperatures far below the melting point - in some cases down to −20 ° C - the material remains liquid as a supercooled melt in a metastable state, since the salt dissolves in its crystal water; the water molecules form a kind of crystal lattice of their own, which dissolves first.

If a metal plate (similar to the one in a cracking frog) is pressed into the heat pad, this triggers crystallization. The cushion warms up again to the melting temperature, whereby the complete crystallization and thus the release of the latent heat can extend over a longer period of time. Possible triggers for crystallization are:

Based on an article in Wikipedia.de