You can take meloxicam and tramadol together

The multimorbidity of old people often requires therapy with more than ten different drugs. When it comes to analgesics, it is not uncommon for self-medication to be added. In order to be as pain-free as possible, wild drug cocktails are often taken that the family doctor knows nothing about. However, with the number of drugs administered, the risk of interactions increases exponentially. This problem will be discussed in the following article using case studies.

A 76-year-old woman is hospitalized with an acute myocardial infarction and successfully placed a stent on a coronary artery. Because of back pain, insomnia and anxiety, she is prescribed an NSAID, an antidepressant and a tranquilizer in addition to her antihypertensive, anti-coagulant and lipid-lowering therapy. This is what the intake plan looks like: 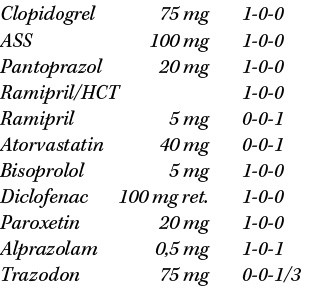 After five days, the patient was discharged home “in better condition”, and two weeks later she was admitted to the hospital again due to syncope at night. It turns out she has developed massive intestinal bleeding that needs to be surgically cleaned up.

Although no gastrointestinal disorders were described in this woman's anamnesis and despite the prophylactic administration of gastric protection, life-threatening bleeding occurred. The patient stated that she had taken additional painkillers from her husband "every now and then" due to continued severe back pain! The result is a combination of four substances which, with different modes of action, can synergistically represent an increased risk of bleeding: clopidogrel, ASA, paroxetine and diclofenac. Additional possible interactions through mutual influencing of the CYP P450 enzyme system in the liver and elimination disorders with impaired renal function (especially in old age) increase the risk of clinically relevant side effects of this polypharmacy even more.

When using analgesics, too, kidney and liver function should always be taken into account, as the individual active substances differ significantly from one another in terms of metabolism and excretion (Table 1).

Side effects of NSAIDs

It is still the NSAIDs that are most frequently prescribed for pain therapy. The certainly unique anti-inflammatory effect is offset by many adverse drug reactions (ADRs) such as acute kidney failure, worsening heart failure, decreased blood pressure, increased risk of bleeding in the gastrointestinal tract, and colitis, especially in combination with many other drugs. They top the list of drugs that lead to inpatient stays due to ADRs [12, 13, 14]. According to a systematic analysis of observational studies from 2000 to 2008 [1], the relative risk of bleeding or perforation in the upper gastrointestinal tract is 4.50 for traditional NSAIDs and 1.88 for coxibs. For ibuprofen (2.69), rofecoxib (2.12), aceclofenac (1.44) and celecoxib (1.42) the risk was below the average calculated for all NSAIDs. For ketorolac (14.54), piroxicam (9.94), naproxen (5.63), ketoprofen (5.57), indomethacin (5.40), meloxicam (4.15) and diclofenac (3.98) lay on the other hand, it is above average.

The degree of COX-1 inhibition is apparently not suitable as a risk indicator, but an over 80 percent inhibition of both isoenzymes is. In addition, NSAIDs with a long half-life and slow release kinetics are apparently associated with an increased risk of complications in the upper gastrointestinal tract [1].

Numerous international cohort studies show an anti-platelet aggregation effect with SSRIs, but also with venlafaxine [4, 5, 6, 7, 9, 10]. Combination with NSAIDs or other platelet aggregation inhibitors increases the risk of gastrointestinal bleeding massively [8]. The odds ratio (4.8) almost doubles (9.1) if the patients did not take a gastric acid blocker for the prophylaxis of bleeding. Further interactions of NSAIDs (see also Table 2) are threatened when combined with:

According to the WHO step-by-step plan, paracetamol and metamizole should be seen as possible alternatives to NSAIDs if an anti-inflammatory effect is not necessary. What is their security profile in multimedia?

A 68-year-old patient with colon cancer and extensive liver metastases that had been stable for months complained of slight upper abdominal pain. Good pain control is achieved with 4 x 500 mg paracetamol. Within a week he becomes confused, then comatose, and eventually dies. No liver parenchyma is found at the autopsy [11].

Paracetamol undergoes a complex hepatic metabolism. About 98% are conjugated, while normally only a small proportion is hydroxylated by cytochrome P450 enzymes to the highly reactive N-acetyl-benzoquinone imine. This metabolite reacts with glutathione and thereby loses its toxicity. Irreversible liver cell necrosis occurs when more of the metabolite is formed than can be absorbed by the glutathione present. This is the case when the liver parenchyma is damaged (e.g. with cirrhosis of the liver, fatty liver) or reduced (e.g. due to extensive liver metastases) and less glutathione is available. This can also occur if an enzyme induction (e.g. by phenytoin, carbamazepine, alcohol, rifampicin) increases the proportion of hydroxylated paracetamol [15].

With regard to other organ damage, however, paracetamol scores significantly better than NSAIDs.

A 64-year-old patient with bloody and febrile (up to 39 ° C) diarrhea was treated with ciprofloxacin 2 × 250 mg [16]. On other drugs he received acetylsalicylic acid 100 mg / day, metoprolol, valsartan / hydrochlorothiazide, isosorbide dinitrate and atorvastatin. During a nightly home visit, the patient presented himself confused and chills. The blood pressure was 120/80 mmHg and the pulse was 120 / min. The attending physician gave 2,500 mg metamizole slowly over five minutes i.v. v. This led to a slight improvement in condition and an increase in awareness. After a short observation period, the doctor left the patient, but was called again five minutes later in an emergency due to loss of consciousness. Clinically there was now cardiac and respiratory arrest. Resuscitation was unsuccessfully terminated after 50 minutes. The main findings of the autopsy were erosive enteritis and an extensive old posterior wall infarction with fresh marginal hemorrhages and long-term occlusion of the right coronary artery. The stool examination revealed Salmonella enteritidis. The cause of death was considered to be cardiac failure due to salmonella enteritis and severe previous damage to the heart.

The reporting physician suspects that the patient actually died as a result of the metamizoline injection of a severe hypotensive reaction and fatal arrhythmia in a pre-damaged heart, to which a ciprofloxacin-induced QT prolongation and hypokalaemia due to the diarrhea may have contributed. This case study shows impressively how complex interaction reactions take place and how many different factors play a role in clinical relevance.

The use of metamizole, which has excellent spasmolytic properties, is still viewed very critically because of the increased risk of agranulocytosis (1: 1 439) and the relative risk of loss of resistance shock, which has been described in Sweden in particular. To reduce the risk of shock, no more than 1 ml or 0.5 g of active ingredient should be injected per minute while the patient is lying down. Severe hypotension is a contraindication to parenteral administration.

In addition to the differential blood count (leukocyte count <2,000 / mm³, granulocyte count <500 / mm³), symptoms such as tonsillar angina, chills and continuous fever as well as multiple mucosal necrosis, which are due to the weakened immune system, indicate agranulocytosis. When metamizole was administered, an incidence of 1.1 agranulocytosis diseases per million exposed persons per week of treatment was found [3]. Metamizole must not be used in patients with known disorders of bone marrow function or disorders of the haematopoietic system.

The part of the tramadol that attacks the central µ-receptors has to be activated in the liver after absorption by the CYP 2D6 system. In addition, tramadol (without activation) also has an analgesic effect by increasing serotonin and norepinephrine. The increase in serotonin in particular is likely to be responsible for the very common gastrointestinal side effects such as nausea and vomiting. In combination with other serotonergic substances, attention should always be paid to the occurrence of serotonin syndrome, characterized by akathisia, restlessness, vomiting, tremor and sweating (Table 1).

Tramadol lowers the seizure threshold, which can lead to seizures, especially in combination with theophylline, antipsychotics, bupropion and alcohol.

Especially when using fentanyl patches and oxycodone, simultaneous use of other anticholinergic drugs should be avoided in order to prevent cognitive deterioration and even delirium - especially in elderly patients. With all opiates, especially those given intravenously, the simultaneous parenteral administration of benzodiazepines and neuroleptics should increase the risk of respiratory depression.

Carbamazepine can lead to cognitive deterioration, liver damage and severe sedation. In the case of existing kidney damage, gabapentin and pregabalin absolutely require dose adjustments, as otherwise the risk of side effects (dizziness, dizziness) increases.