What is a gusset in construction 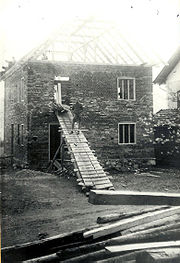 It is also common to see many customs in the course of rural life and events the construction of a new house with different customs connected. These old customs were recorded by senior teacher Josef Hufnagl.

Note: The spelling corresponds to the time the text was created.

It starts with the cellar. When building a new house, the first thing to do is dig the foundations and dig the basement. Once that is done, the cellar walls are bricked up. Finally, the cellar is covered with a vault. On this occasion, the so-called "gusset setting" is an old custom. The purpose of this gusset setting is to stage a little hustle and bustle in order to make the monotonous masonry work a little more varied and, which is not insignificant, to find a little something for the physical well-being of the masons and craftsmen involved. It's about the keystone of the whole thing and this event must be celebrated. The so-called gusset is the last chunk of brick that, according to old custom, the farmer is supposed to hammer into the vault himself. But the bricklayer foreman knows how to prevent this by having a bricklayer in the basement repeatedly push the gusset out or stop it with a lath. The perplexed farmer turns to the foreman for advice. He looks at the matter and then speaks the weighty word: “It has to be lubricated, there is no other way!” The farmer pretends to be stupid and asks even more stupidly: “What and who has to be lubricated?” Then the foreman: “The Zwickel doesn't go in, so it has to be greased with bacon and beer or whatever other grease is in the house! ”Nor does he give in earlier than until the farmer finally realizes that it's all about bacon and smoked meat Open the barrel of beer. The gusset then easily penetrates the masonry, because no bricklayer can stop it with a lath.

Walling in a spell

When a house is being built, a blessing formula or a spell, as one wants to interpret it, is walled into the door frame. It must have been like that in the Gstöttnerhaus, house number 2 in Giga, Parish Weißenkirchen i.A. Because when this house was demolished in the spring of 1964, a piece of paper was found in the wood of the house door when the house was broken off, on which the following was written:
From misfortune and danger in the house
Saint Matthew, Saint Mark,
Saint Luke, Saint John,
keep us in house and yard
of sickness and thievery
item alle Martyr Sancti Benedicti
+ + + Amen. I.N.R.J.
Our Lord Jesus Christ entered
into the hall, there they fought him
Jews everywhere.
All so by day those must
so me with their wicked tongues
wrongly downsize reflected
quarrel by praise
God's silence, failure
and be despised.
God always help me
and forever. Amen

Just as one usually has a house blessing or a blessing affixed to the front of houses for the protection of the house, so here one may have such a protective magic formula, in which the believing and the superstitious were mixed together, inside the house floor and in the form of a magic slip . Be it as always, the matter is not uninteresting and maybe worth mentioning.

Carpenters at the joinery in 1951

Most of the customs, however, revolve around the roof structure and how it came about. The rafts (= rafters) and trams and ribbons of the roof truss are first chopped up with the broathacka (broad hoe = a wide hoe made for this purpose). The place where this happens is called the Bundplatz. On this Bundplatz, people first pray, then the chopped up rafs and trams are wedged in and fitted together. This matching of the rafs is called tying. This tying is a difficult thing. Everything has to fit together before the roof structure is erected. That is why we pray through every evening while the roof truss is being tied and erected so that the work succeeds and that no misfortune happens even when it is even more difficult to erect.

Once the roof structure has been chiselled in and fitted together, it is erected. Every Rafen, every tram and every bundle of wood comes to its right place. The last Rafen should also come to its place, but there it is difficult, it cannot be brought up and, of course, because it cannot be brought up, it has to be properly lubricated again. To this end, every next best passerby is stopped to help. Those caught in this way have no choice but to help and to help. Since it is still not done, he has no choice but to open the money bag and "smear" it accordingly. The more such goo, that is money and food, comes together, the easier it is for the last raven to get to its place.

Most of the fuss is about the first 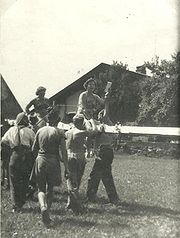 The ridge is the top beam of the roof structure and crowns the whole. No wonder that most of the customs revolve around this last beam, the ridge. It is something similar to the primacy boy in a primiz or the bride in a wedding. All three are stolen so that a transfer can be paid for.

Various jokes happen when the ridge is stolen. It is stolen by the boys or neighbors, loaded onto a wheelbarrow and driven through the village. There is a stop in front of every house, if possible they drive in with the ridge at the front door and beg and joke until the farmer agrees to make a donation, be it in money or in kind. If a smart dirndl is caught on this parade, it is captured, nailed to the ridge on the clothes and driven through the village in triumph, to everyone's delight, except for the dirndl, which is not too comfortable on this seat - and driving, but it is is of no use, it has to submit until it has ransomed itself with a proper ransom. Such a Dinrdl is then mostly cured for all time and cannot be caught a second time. The end of the elevator is the consumption of the ransom, which does not always take place silently and without mischief and lasts until late at night.

If the ridge is to be raised the next morning and to come to its place, the farmer must try to look for it and not save the ransom. The farmer must also help with raising the ridge and, if that is not possible, open his wallet. Finally, after a lot of grease on all sides, the ridge sits at the height of the roof and crowns the whole, house and roof truss. From this place he embraces all the residents of the new house and takes them under his care and has thus become a symbol of perfection. If the ridge sits in its place, the house is finished and does not need any further ingredients. So it is to some extent understandable that with the elevation of the ridge and its coronation, the celebrations and customs that are otherwise connected with building a house find their connection.

SATOR, AREPO, TENET, OPERA, ROTAS. These magical fire-fighting sayings, written on paper, were glued to a roof beam of the Brandstatt farmhouse, Brandstatt No. 2, KG Weißenkirchen i.A. They were discovered when the house was demolished in 1968. This builder's mark was found in the entablature: I S P 1797 G R