How does cheating work in chess

Chess is fun. But unfortunately there are people who want to spoil this fun. Scammers who play with the help of others. They are mainly on the Internet, but also outside of the digital world. This is about where the so-called cheaters appear, by what means they thwart the fun and how you can recognize this. 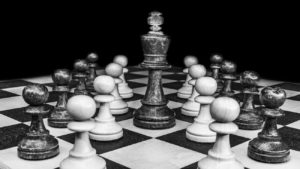 The subject is complex. People have always tried to gain an advantage in chess, as in other games. With the computer age, this is easier than ever. While the programs were severely limited until the early 1990s, AIs (Artificial Intelligences) are now so good that they can easily defeat anyone who has ever lived and will ever live. Against a good AI - and you can now count the hundred best - a dust-born can only achieve a draw. If he's a genius.

Access to the software is very easy today. Regardless of whether it's a computer or smartphone, a powerful chess program is now running on almost every device. Thought to pass the time and exercise, you can also cheat with it. Especially online.

Every child can cheat

To be honest, I can hardly understand the motivation. Fraud can be observed on all platforms. These players achieve a high rating in a short time and will (hopefully) be convicted at some point. In the meantime, they have spoiled the fun for many. It's no fun when you want to play against people but compete against AIs. Chess players are particularly angry when this happens in a tournament. You can see your inferiority and days or weeks later you realize that at least one of the first three places has meanwhile been blocked. Sometimes the accounts of the people marked as fraudsters are deleted afterwards. Seconds later they create a new account.

This is one of the reasons why I hardly ever play online or only against people I know personally. Knowing that scammers are lurking everywhere.

It gets extreme when YouTubers cheat or cheaters show YouTubers, film themselves cheating and post it online. This then takes on abnormal forms. But how does it work?

Basically you have to know that the more time you have per move, the easier it is. A smartphone is sufficient today for 10 minutes or more for the whole game. The game is played on the computer, the game is played back on the mobile phone and every move is analyzed. Or the AI ​​chooses the best move right away. In rapid chess, the AI ​​strength is sufficient even against higher-class players (> 2100 points).

In correspondence chess, where you have one or more days per move, it's even easier. The AI ​​can analyze the position for several hours and you will definitely find the perfect move.

It gets more difficult in lightning. It is advantageous if you play on the PC and have a chess program open at the same time. The movements with the mouse are quick and as a cheater you can win a 5min or 3min + 2second game in no time.

That hardly works with Bullet. Perhaps this is one of the reasons why so many get excited about it. There is simply not enough time to ask the AI. At least in theory, but more on that in a moment.

Away from the internet 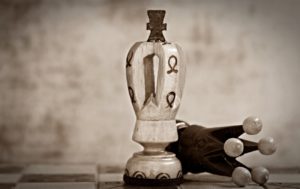 Anyone who thinks that scammers only exist on the Internet is unfortunately mistaken. This happens again and again in leagues and chess tournaments. Chess players receive information from outside, have hidden a device or briefly look at their smartphone in the toilet. There is nothing that does not exist, but it is less common here.

Official games are checked afterwards, at least in higher leagues and at important tournaments. Not only can the error rate be determined on the basis of several batches, but the agreements with AI recommendations can also be examined. It has already happened several times that players were subsequently banned and the victories were revoked.

Clever chess players try to escape the radar by only attending smaller tournaments. Here it is easy to increase your score without being conspicuous. The motivation is, on the one hand, the satisfaction of one's own ego, sometimes also prize money, sponsors (which is less the case) or preference for associations.

The problem with post checks - both offline and online - is that they are not perfect. It may well be that a good chess player delivers an almost perfect game over several games. Especially against clearly tough opponents. The error rate alone is therefore not a good indicator, especially if only a few batches are taken into account. There is always a risk of accusing innocent gamblers of cheating. This uncomfortable feeling hangs over many chess players like a sword of Damocles.

To understand the complexity, let's look at a number of possible tests. It is not said that all tests are done on one platform, but like doping in sport, there is a race between providers and cheaters.

There is a tendency - but this is more of a speculation on my part - that one can expect less cheating on a paid platform. On the one hand, because a paid service has more financial resources (and interests) to fight cheaters. On the other hand, many do not want an account that they pay to be blocked. But there is no such thing as absolute certainty.

The standard test is margin of error. The games are analyzed and checked for inaccuracies, mistakes and blunders. The whole game can add up to a 1/100 pawn unit rating. The lower the value, the more perfectly the game was played. Experienced fraudsters know this and are taking countermeasures. For example, by making mistakes at the end of a game that are not decisive for the game. This can be found out in a more detailed analysis, so the cheater counteracts it again and makes bumbling moves at the beginning in order to then play perfectly with AI support.

One indication are constant reflection times. A human player has large fluctuations per move. Some trains go faster, others slower. If there is the possibility, a player uses so-called pre-trains. This means that you are already logging in the next move, although the opponent has not yet moved. That saves time. Anyone who plays with an AI actually has to wait and see what the AI ​​says and has to forego the possibility of such moves. Instead, the sequence is always the same for each move, regardless of whether it is the opening, middlegame or endgame. The cheater forwards the move to the AI, which calculates, outputs a result and the player makes the proposed move online.

Anyone who has the same move time on almost every move over several games makes themselves suspicious. Scammers know this and take breaks here and there accordingly. You have to wait 30 seconds just to break the regularity.

This is relatively easy to identify from a platform. If you cheat on a PC with an AI, you have to change the window with every move. This process can be documented by the platform. In connection with the factors error rate and train time, cheaters can thus be easily identified. Countermeasure? You have a second PC or smartphone. That solves the problem.

Anyone who has played a few games online knows that. Before the move, several pieces are clicked, the mouse pointer glides over the board and with drag & drop the shortest path is not always chosen. This data can be recorded by the platform. Cheaters are very direct here. The AI ​​gives the perfect move, why should you click on other figures or make unnecessary movements with the mouse?

The problem with this query is as follows. There are players who connect their PC to a real chess board. The board shows the online moves and so you can comfortably compete against people from all over the world at the table. The player makes a move on the board, the board forwards this to the PC. There is no mouse movement here. And this function has branded numerous honest chess players as cheats in the past.

One often reads about the suspicion that chess platforms take screenshots of the desktop. That is - at least in the browser - complete nonsense. If this were possible, the door would be wide open to blackmail. Not in the field of chess, but on the more intimate side.

But what is certain: ChessBase with Fritz automatically connects to the Internet and sends data. So anyone who thinks he can use Fritz to cheat in the browser on the same platform will be exposed right away. There are also comparable tests for lichess if you play in one window and the analysis function is running in the other. The game is canceled immediately and counted as a defeat.

In official tournaments you go one step further. The chess players should play with one or two cameras. One shows the face, the other camera the hands on the mouse and keyboard. This shows how far it has already come.

There are programs that specialize entirely in cheating. The best known is Chess Bot. The very existence of such software shows it is utter madness. The fact that you even have to buy it and that people actually spend money on it, makes the motivation for online chess sink into the ground. But what does it do?

With its numerous setting options, it cancels out almost all of the measures described above. If desired, it even plays itself because it recognizes the boards of most chess platforms. It varies strength, move times and tries to operate the mouse humanly. It is programmed in such a way that there is no longer a window change. You can play yourself, then it only shows the suggested moves on the board. The engine is freely selectable, and you can also add an opening book. The strength can be regulated either by time or by depth. There is even a gradation. E.g. 2 moves in the first 5 moves, then 10 moves up to the 10th move, etc.

If you do it cleverly, you will survive the camera controls. The tool can be operated with keyboard shortcuts, is located in a small, dark window and if it only shows suggested moves on the board, you can neither see from the eyes nor the mouse movement that someone is cheating. Anyone who also shows acting talent will hardly be convicting.

A further complicating factor for the platforms is that Chess Bot shows detailed instructions for functionality and settings. You don't need any technical knowledge anymore. Anyone can cheat with just a few clicks of the mouse.

The software shows what is possible today. Since Chess Bot is commercial, it is safe to take action. But we don't know how many resourceful programmers develop their own versions that are no longer discovered. An AI that dynamically adapts to the strength of the opponent will hardly be recognizable.

A few years ago I read an article in a games magazine that said around a third of all online gamers were said to cheat in first person shooters. It turns out that there are cheaters in almost all games. Chess is no exception. It's hard to enjoy the online experience. There is currently no permanent solution without massively violating data protection regulations. Modern platforms invest a lot of energy to catch black sheep, but this is more difficult than you think.

In addition to the methods shown, there are others, such as sandbagging. Here, players purposely lose to contribute to other rating points. Also, this can help to get a more natural profile when cheating.

The greatest chance not to lose the fun is to adjust your attitude. After all, chess is not just about winning and losing, but also about personal improvement. And whether you achieve this through an AI or through humans, it doesn't matter anywhere.