There are two beaches in the village. The public Chepes Beach, at the western end of the village. The beach is nice, but quite crowded and littered on the weekend, and during the week it was much more pleasant. At the eastern end of the village is the private Bando Beach. The entrance fee is 40 HNL (about 1.40 €) and there are beach chairs, umbrellas and a bar. The entrance fee is worth it, the beach is really nice and clean.

Almost every accommodation on the water has one Private jetty. Bathing and snorkeling on the doorstep is extremely comfortable. So we spent most of our time there.

The most beautiful beaches on the island are definitely on the island North side of the island: white sandy beaches with palm trees like from a picture book, cliffs and villas. However, the accommodation costs accordingly more than in the main town in the south. The best way to get there is by golf cart or taxi boat. Even the islets in front of Utila - cute The Keys called - looked so fantastic from the boat!

Is it worth visiting Utila?

And now the ugly thing about Utila: there are sand flies! And lots of mosquitos. So you should bring enough deet spray with you - unless you are one of the lucky ones who never get bitten. Alternatively you can use coconut oil (against the sand flies). Depending on the weather, it is sometimes worse, sometimes better - the time of day doesn't really matter, they bite early as in the evening. So I sprayed myself around the clock and was still bitten badly (luckily not as bad as on Holbox in Mexico).

Granted, Utila is not the prettiest island. When you arrive by ferry, the first visual impression is not necessarily overwhelming. But don't be scared the visit is worth it! And once you're there, you'll find the nicer corners too. 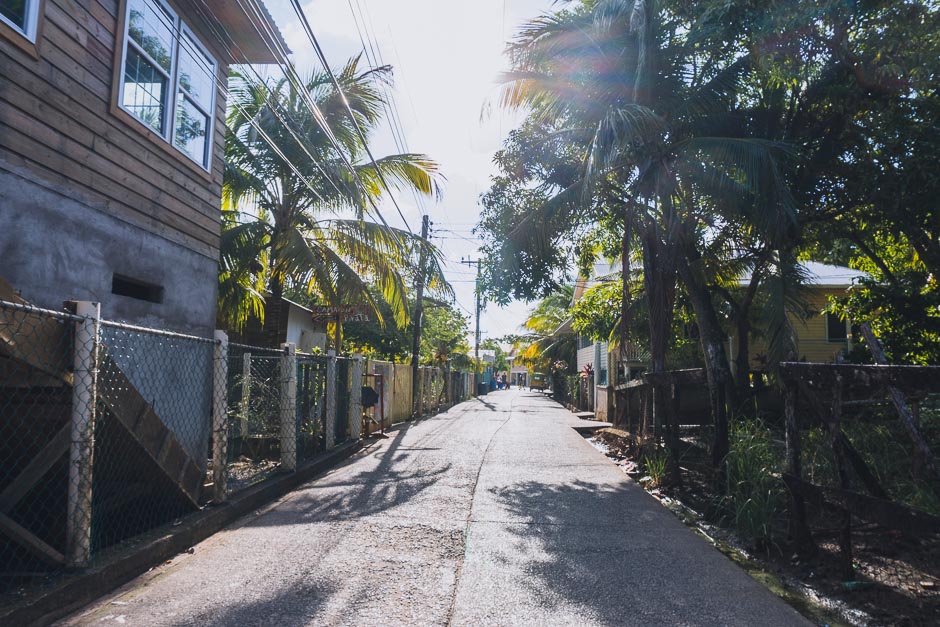 Utila can be very beautiful

It's all about baleadas.The most typical food in Honduras is baleadas. A tortilla cake that is filled with bean puree, cheese and everything you could want. 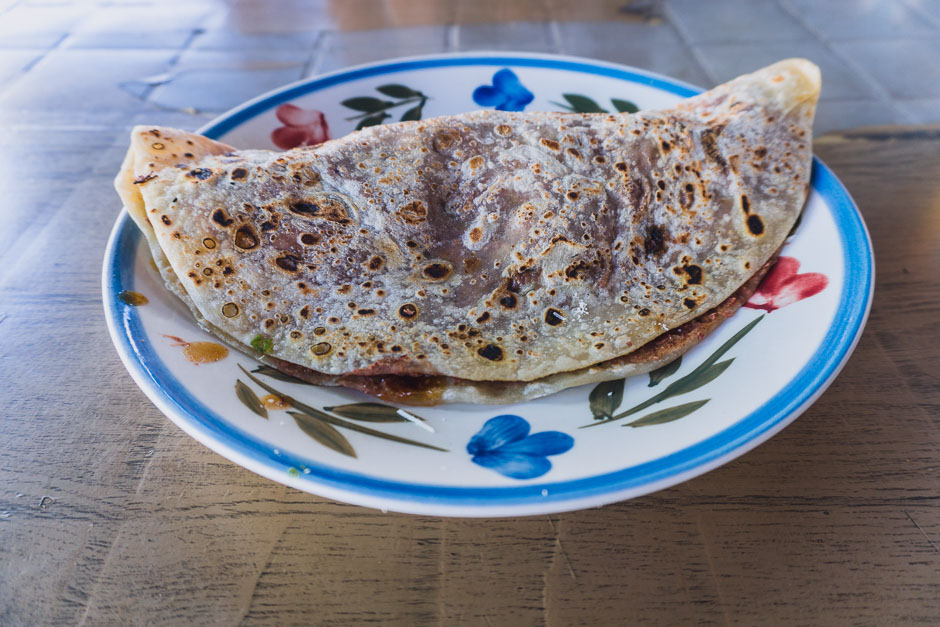 In terms of price-performance, there’s the best in a small, very simple "restaurant" between Bush’s supermarket and Mango Tango. Unfortunately I don't remember the exact name. We also had very tasty baleadas Baleadas Mama Rosa - diagonally across from Rubi's Hotel.

Also opens in the evening El Gordo - a grill stand on the street, with (as the name suggests) thick burritos and baleadas (diagonally across from Paradise Divers).

When it shouldn't be baleadas

On Tuesdays, the Mango Inn has 2 pizzas for the price of one. They definitely have the best pizza utilas (not the best in the world, but pretty good and quite Italian for Central America). Definitely worth it!

Huge portions at reasonable prices. There is fish, meat or burgers, what is sold out is removed from the menu! So don't be late. Open on Wed, Fri and Sun

We had the best meal on Utila at Mango Tango. Admittedly also the most expensive. But the pasta is really worth it! (The ravioli weren't too rich, the seafood linguine was enough for two!). Just delicious!

Italian and seafood. When we were there there was unfortunately no fish. The pasta is solid, but doesn't match that of the Mango Tango. But the prices are cheaper.

Utila can do a lot at night too

When it comes to nightlife, Utila has a lot to offer. There are countless bars along the water, almost all of which offer happy hour in the evening. There you can watch the sunset with a cocktail in hand. We really liked the bar at the Parrots diving school, as there is a balcony-like jetty on which a slight breeze can be felt (this is not a matter of course on Utila).
Unless you're diving at 6 a.m., Utila has a decent range of parties. However, the parties are very special. Every time a huge party was announced, no more than 5 people came. There was an unannounced party 100 meters away that was very popular. It is best to go where something is going on - you almost never have to walk far.

Utila is in Honduras - a country that unfortunately makes headlines with mostly negative reports and is politically quite unstable - but Utila is considered very safe. Probably the safest place in the country. 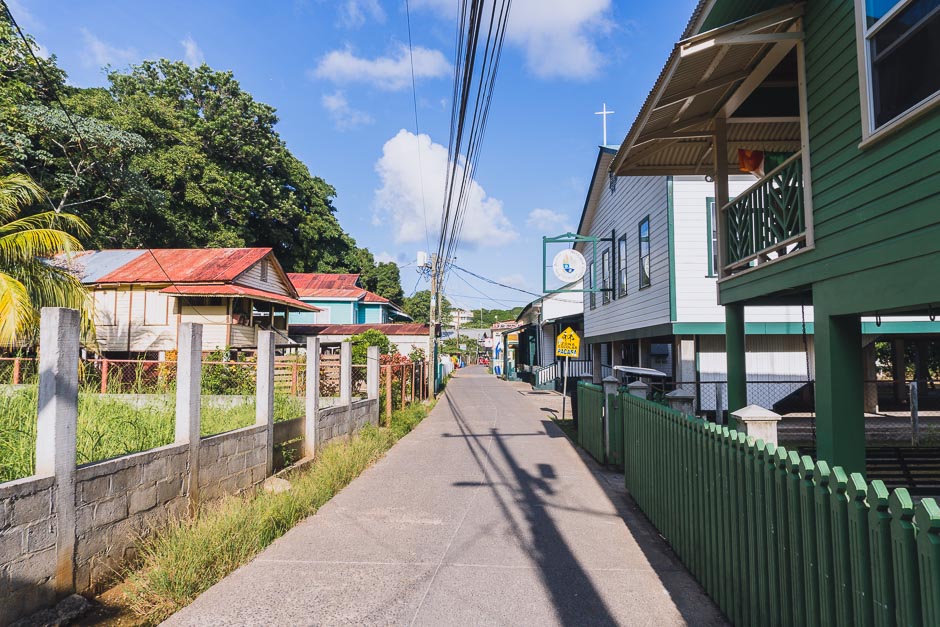 We walked across the island during the day as well as at night and never felt uncomfortable. Nevertheless, one should of course not stumble through the area with valuables swinging around at night. The place is small and you see each person at least three times a day.

Getting to and from Utila: bus, ferry and minivan

Of La Ceiba The Utila Dream Ferry runs to Utila twice a day. The crossing is with US $ 25 (575 HNL / as of Sept. 2017) not exactly cheap for just under an hour's drive. There is no discount for round-trip purchases. If you like, you can continue from La Ceiba to the neighboring island Roatan (Cost $ 30).
There are shuttles in all directions to and from La Ceiba. We are with that Public bus from Guatemala Drove to La Ceiba via San Pedro Sula and would do it again anytime.

We are directly further from Utila to Leon, Nicaragua. You can easily do the tour by chicken bus, but then you need 2-3 days. So we decided to take a shuttle. 16 hours It wasn't fun, but we wanted to get there as soon as possible. At a cost of $ 60 p.p. Not exactly cheap, but the minivan was in good condition, we had more than enough space, after about 8 hours the driver was replaced and the border crossing to Nicaragua worked perfectly even at night. We can recommend the company with a clear conscience.