Tesla remains on the road to success

Tesla continues its record run and has posted a profit for the fifth quarter in a row amid the corona pandemic. While the traditional carmakers are struggling to get out of the crisis, the electric car pioneer from Silicon Valley is circling in its own orbit. But the air is now getting thinner, because the competition - especially Volkswagen - has set out and wants to overtake Tesla soon. "The company is still incredibly highly valued, as if it were operating in a vacuum. But the competition is working like crazy to catch up," said analyst Craig Irwin of Roth Capital Partners. He pointed to more than 400 new battery vehicles that should hit the streets by 2024.

Between July and September, Tesla delivered 139,300 vehicles, more than ever in a quarter. Sales rose around 40 percent to nearly $ 8.8 billion, exceeding analysts' expectations. Net profit jumped to $ 331 million, more than twice as much as a year ago. However, the profit is mainly fed by the sale of CO2 credits to other car manufacturers, who use them to offset their own emissions values ​​for achieving the climate targets. In the third quarter that was $ 397 million. Without this revenue, Tesla would not have been profitable in the third quarter. Since the competitors are bringing more and more climate-friendly cars to the start and thus improving their CO2 balance, this rain of money for Tesla should be significantly smaller in the future. Then, according to analysts, it will show whether the company can make money selling electric cars. 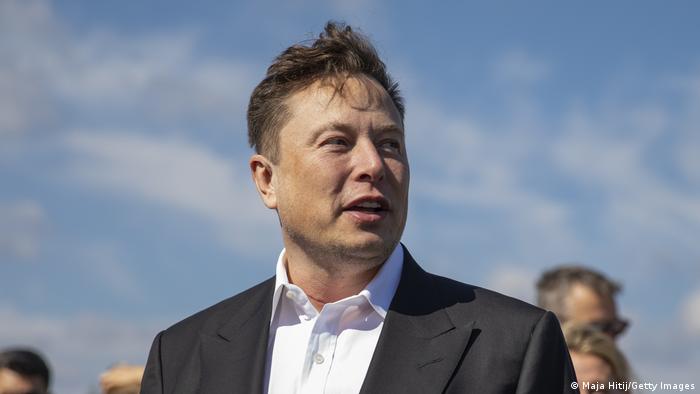 Tesla boss Elon Musk, here on a visit to the construction site of the new plant in Grünheide near Berlin

On the stock exchange, Tesla has been the world's most valuable car maker for some time. The share price has risen by a good 400 percent since the beginning of the year, and by almost 730 percent in the past twelve months. Most recently, Tesla's market value was $ 394 billion. This means that the e-car pioneer from Silicon Valley is trading more than three times as high as the two largest US manufacturers, General Motors and Ford combined in terms of market shares, despite much lower sales figures. Tesla is also miles ahead of the German car companies in terms of market value.

Tesla reiterated its goal of delivering half a million cars by the end of the year - for which, however, it would have to increase sales significantly in the final quarter. Towards the end of the summer quarter, CEO Elon Musk personally drove the workforce to record deliveries. The capacity for 500,000 cars is ready, stressed Tesla. However, it has become more difficult to achieve the goal. It depends above all on the success of the compact SUV Model Y and production in the Chinese plant in Shanghai.

Waiting for Grünheide, another plant in Texas

For Tesla's dazzling company boss Musk, who also runs the SpaceX rocket company and many other projects, the soaring is a triumph. For years his company was in the red and the future seemed uncertain. Now Tesla even delivered a record in operating profit - although the car market as a whole is groaning under the Corona crisis. "The third quarter was the best in our history," said Musk after presenting the financial report in a conference call with financial analysts. Tesla is meanwhile pushing its international expansion vigorously, production at the Chinese plant in Shanghai is to be ramped up quickly. In addition, the construction of the first European factory in Grünheide near Berlin is progressing rapidly, it said. Tesla plans to produce and deliver the first cars here as early as next year. In addition, the group wants to quickly pull up another car plant in Austin, Texas, where the compact SUV Model Y and the planned cybertruck will roll off the assembly line.