VW Golf 7 IQ.DRIVE in the test: 2019 special model as a foretaste of the 8 series

“Cup”, “Lounge”, “Edition”, “Allstar”, “Sound” and “Join”: the list of special Golf models is long. It's been a long time since the seventh Golf series entered the market. The year was 2012. In 2017, VW thoroughly revised its parade model, and last autumn the engines were brought up to scratch in terms of emissions. And what does 2019 bring? Towards the end of the 8 Series Golf - and to begin with a new special edition. We are testing the Golf IQ.DRIVE.

Contents of the test report for the VW Golf IQ.Drive: 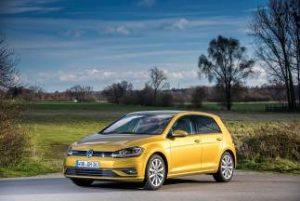 Even in the last year of the 7 Series Golf, VW does not shake the basic recipe for its special editions. The "IQ.DRIVE" package consists of the familiar basic components: a selection of various extras that are put together according to a specific leitmotif; and from one rich discount, the one with a extended warranty is sweetened. The tasting of the end product promises excitement despite the well-known basic pattern. Fresh ingredients and the self-confident motto, “Progressive - even when it is standing”, ensure the special flavor; the maximum savings potential of 3,200 euros for that special motivation boost. The middle standard equipment line “Comfortline” acts as the basis for the “IQ.DRIVE” package. It is refined with extras that are primarily in the future field of autonomous driver assistance systems are at home. But, there are some old-fashioned analog encores too. The most striking of these are the four 16-inch alloy wheels: in the "Dublin" pattern and with a black, high-sheen surface. For those who find the special-model standard rim too small or not shiny enough, the Wolfsburg-based company offers five alternatives with a diameter of 17 inches (other rim designs are available in the accessories catalog). 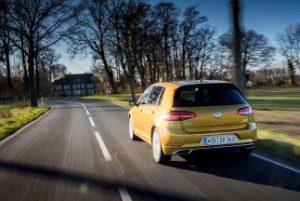 They can be used separately or, in the case of the “Madrid” and “Sebring” designs, as part of one Special packages be ordered. These listen to the names "IQ.DRIVE Plus" or. "R-Line exterior" and cost 1,600 and 1,915 euros respectively. With prices like this, one can expect the packages to have more to offer - and indeed it is. The "Plus" bundle not only equips the Golf with the “Madrid” rims; but also with one own bike lock against theft and with that "Composition Media" infotainment system. That in turn is characterized by a good twenty centimeters large, central touchscreen, a CD drive, an SD card slot, USB ports, one Bluetooth Handsfree Car Kit and eight speakers. The “Plus” package also includes the "Discover Pro" navigation function, the operability of the system by voice command - and a Traffic sign recognition. And there is another quality inherent in the "Plus" extra bouquet: it also increases the price advantage. 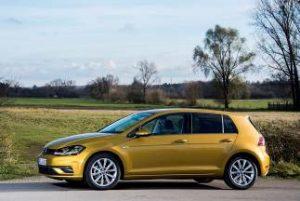 But there are details that the Golf IQ.DRIVE is still missing even with the “Plus” extension: for example, a smartphone integration that deserves the name. The "App Connect" app has to be paid for separately: specifically with a good 200 euros. On the other hand, the darkened windows in the rear and the optional special paint color "Petroleum Blue Metallic". These two extras are also found in the compact when it is combined with the "R-Line Exterior" package is adorned. It is just as extensive as the “Plus” package, only with a different focus. As the name suggests, the focus is on optics. She will apart from the 17 inchers in the “Sebring” design also with one painted in the same color as the car Rear spoiler, one specially drawn grille, wider sills; and specially shaped bumper sharpened. The second excellent feature of the exterior package is the fact that it offers the greatest price advantage: it is 3,200 euros. 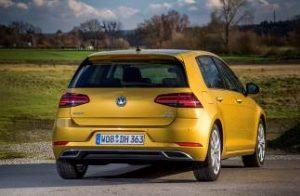 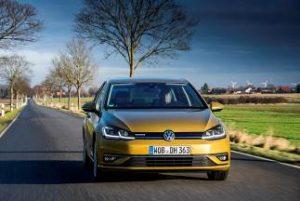 Speaking of a closer look. He also draws them additional assistance systems that make the Golf IQ.DRIVE what it is. He inherits two vigilant systems from the “Comfortline” equipment: The Drowsiness detectionwho monitors the blink of an eye; and the Environment monitoring system "Front Assist"that brakes itself in the city in an emergency. Added to this are a) the "Blind Spot" sensor "Plus"that monitors the blind spot when changing lanes and when pulling out of a parking space. B) is also the Park Assist "Park Assist" one of the parties, with which even parallel parking is possible as if by magic. And c? The third Argus eye belongs to him automatic distance control ACC. With the manual gear, it ensures that the distance remains as safe as it was set. Anyone who opts for a dual clutch transmission can also enjoy the "Stop & go" function: It brakes the Golf independently in a traffic jam and starts it again in the same way. Everything else is as usual in the last 7-golf special, in short, tip top.

MeinAuto.de Editor: MeinAuto.de Redaktion |
Conclusion: The Golf IQ-DRIVE has the honor of the last special edition of the 7 Series Golf. Fittingly, VW equips it with future-oriented driver assistance systems - even if the "IQ.DRIVE" motto sounds too full-bodied. But otherwise it marks a worthy end to the seventh golf era. At MeinAuto.de, the special model turns its farewell round at a rate from 218 euros or from 18,976 euros - 22.0% or the equivalent of a good 5,200 euros cheaper than listed. The conventional Golf starts at a rate from 178 euros or from 16.1591 euros.
5 out of 5 points