How much money does ISIS have

The IS terrorists' money

It is known that the terrorist organization IS (alternatively also ISIS, ISIL or Daesh) has enormous financial resources. The German government assumes a "capital stock of one to two billion US dollars".

The terrorists' current income is also substantial and comes from a variety of sources: from smuggling oil and antiques to looting banks, expropriating people, extorting ransom and protection money, to tax revenues and donations.

In most cases, however, there is a lack of reliable knowledge. "The federal government has no information on this" was by far the most frequent sentence in the spring of the 16-page reply from the German government to a list of questions from the party Die Linke in the Bundestag.

In contrast to organizations like Al-Qaeda, IS is not a loose terror network, but functions like a state. He controls areas, the resources there and the population. That is why its dependence "on foreign financial flows is generally low," believes the federal government.

"The Islamic State controls a large territory and can thus generate capital locally and create financial flows that Al-Qaeda did not have available," Reinhard Schulze, Islamic scholar at the University of Bern, told ARD radio. This also complicates international efforts to cut funding for the terrorists.

After all, the income from oil smuggling is declining - because the oil price is so low, but also because there are now better controls in Turkey, Iraq and the Kurdish regions, according to the assessment of the Financial Action Task Force (FATF), an international working group the OECD on the fight against money laundering and the financing of terrorism. However, more could be done. "We need better information about oil origins, middlemen, buyers, carriers, distributors and delivery routes," the FATF report said.

Air strikes are also reducing oil revenues. On Monday (November 16, 2015), for example, fighter jets destroyed 116 tank trucks in the Syrian province of Deir Essor, announced the US Department of Defense.

As early as the spring, the federal government assumed that IS would earn "a maximum of 200,000 US dollars a day" from the oil business. That's the equivalent of six million dollars a month. However, there are also significantly higher estimates, and reliable information is scarce. 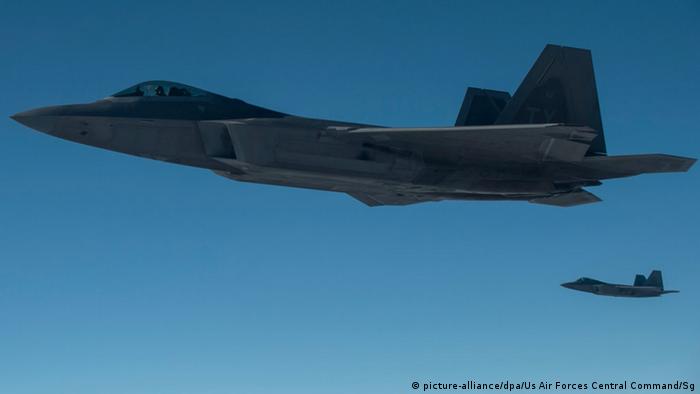 US F-22 Raptor fighter jets fly missions against IS positions

Another important source of income for IS are taxes and duties from the occupied territories. Their residents have to pay "five to 15 percent of their respective income", according to the federal government. In addition, there are special taxes for non-Muslim residents, as well as fees for electricity, water, real estate use, telecommunications, traffic and freight transport.

If IS is under military pressure, this has a direct impact on its income. "The Islamic State has continuously lost territory and revenue since July," writes the US information service provider IHS in its latest report. "That also reduces his ability to pay his fighters."

Estimates of the size of IS troops vary widely. The US secret service CIA assumed 30,000 fighters at the end of 2014, US security expert Daveed Gartenstein-Ross from Georgetown University believes a troop strength of 100,000 is more likely. Maintaining such an army is expensive. According to the findings of the federal government, ordinary fighters receive a monthly salary of 400 to 500 dollars, commanders more than 3000 dollars. Even with conservative estimates, you can quickly get to $ 15 million a month - just for the salaries of the fighters.

The federal government has also received indications that the terrorist organization "is benefiting from private financiers in the Gulf States. Donations are partly collected under the guise of aid organizations, but also openly". The importance of these donations for IS is likely to have decreased.

The Financial Action Task Force (FATF) presented a new report to the G20 countries at their summit meeting last Sunday (November 15, 2015) in Antalya. Accordingly, there have been 863 convictions for terrorist financing in Saudi Arabia since 2010. The USA follows in second place with around 100 convictions. But overall convictions are rare. Out of a total of 194 countries examined, only 33 were convicted of funding terrorist activities, the report said.

37 states have independently imposed sanctions on individuals and organizations and frozen their accounts. Measured against the blocked sum, Saudi Arabia also ranks first here, with a total of 31 million euros frozen by mid-August, in the USA it was 20 million euros, in Israel six million euros.

Conclusion of the report: Despite some progress, the fight against terrorist financing is going too slowly, and in most countries legal possibilities are not being exhausted.

In addition, financial transactions often take place outside the banking system. ISIS has "built up a very informal transaction system," says Islam researcher Schulze, which is presumably based on the Arab hawala system. This is an informal referral system, the roots of which go back to the Middle Ages and which is primarily based on trust.

Regardless of the financial situation of ISIS, the problem remains that terrorist attacks like the one in Paris are possible without large financial resources. The Norwegian Defense Research Institute investigated the 40 bloodiest terrorist attacks that occurred in Europe between 1994 and 2013. Three out of four cost less than $ 10,000.

This is exactly what makes the flow of money control, which the Financial Action Task Force strives for, so difficult. "Kalashnikoffs or explosives for explosive belts can be obtained for relatively small sums on the black market," Hans-Martin Lang from the money laundering prevention department at the Federal Financial Supervisory Authority (Bafin) told DW. "The main problem is that many payments are under the radar and it is very difficult for credit institutions to detect such payments."

So the terrorists won't run out of money for further attacks anytime soon. The information service provider IHS suspects that the ability to do so will "not decrease despite military losses in Syria and Iraq." It is more likely that IS will expand its strategy because it hopes to be able to recruit additional fighters through such an action.