NATO's two percent target: binding or to be strived for? 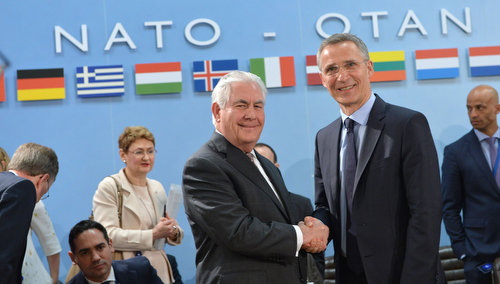 At the first meeting of the new US Secretary of State Rex Tillerson (photo above left) with his NATO colleagues in Brussels on Friday (today) there was a continuation of the drama that has been going on for weeks: How binding is the goal agreed in the alliance until To raise the defense budgets of the member states to two percent of the gross domestic product each in 2024?

Tillerson, in his first talks with NATO counterparts in Brussels, said that Washington is spending a "disproportionate share" on defense compared with its 27 partners, and that he expects action by the time President Donald Trump meets with other alliance leaders on May 25. (...)
"Our goal should be to agree at the May leaders meeting that by the end of the year all allies will have either met the pledge guidelines or will have developed plans that clearly articulate how, with annual milestone progress commitments, the pledge will be fulfilled, “Tillerson told the ministers.

One direction (guideline) and not a mandatory endpoint (goalpost), said the German Foreign Minister Sigmar Gabriel according to the text published by the Foreign Office (in English):

Our defense spending has increased by 13.7% under NATO criteria. This year's budget alone will mark an increase by 7.9%! More than 11% of the federal budget will be spent on defense. The overwhelming part will be made available to NATO directly. It is this “output” for NATO which we need to focus on more - especially with a view to capability shortfalls.
We respect the 2% guideline - but we should not move the goalposts: it was formulated in Wales as a guideline and not as a goalpost. Defense spending and military means are important to provide for more security, but they are by far not the only means.

Gabriel has - in addition to the criteria for civil crisis prevention and management that he always mentioned - certainly has one point here: The significantly larger share of the US defense budget in the budget and in the gross domestic product benefits NATO less directly than the German share.

Nevertheless, I would have liked to know from government spokesman Steffen Seibert and BMVg spokesman Jens Flosdorff whether the choice of words of the German Foreign Minister is shared by the Chancellery and the Ministry of Defense. The answer (also that of AA spokesman Sebastian Fischer) was, well, not that clear:

Addendum: Also here is the transcript:

Question: I almost don't dare to bring up the subject in the short time left. Mr Fischer, before the meeting with US Secretary of State Tillerson in Brussels today, the Foreign Minister repeated the position he had already expressed several times in Germany, namely that there is no binding two percent target in NATO. Mr Seibert, Mr Fischer, Mr Flosdorff, I would be interested to know whether this position is the unanimous position of the Federal Government.

StS Seibert: It is obvious that we are all referring to the resolutions of the NATO summit in Wales, which incidentally also have a history of several years. We have talked about this very often. The federal government is committed to increasing spending on our armed forces. We did that with around 8 percent from 2016 to 2017. In this sense, because we know that it is necessary and sensible to further strengthen our Bundeswehr, we want to go further.

Fischer: The Foreign Minister simply pointed out once again that the Alliance in Wales had decided on a directional decision - I think he used the word in Brussels - that comprised several points. I can quote the decisive sentence again, as the translation service sent us from the English. It says: "... aim to move towards the guideline value of two percent within ten years in order to achieve your NATO planning goals and close NATO's capability gaps."

Additional question: I know all of that. But that wasn't my question. My question was whether the Foreign Minister's statement "There is no binding two percent commitment" is consensus in the federal government.

StS Seibert: There is a joint agreement between the NATO partners - and we stand by it - to move towards these two percent. We are currently at 1.2 percent. The Chancellor said the other day: If we had already come in the direction of 1.5 percent, then we would have achieved a great deal.

We are of course also looking to the next few years. We managed to reverse the trend. We see many reasons why we should do this for our Bundeswehr: The Bundeswehr missions are more diverse than they used to be; the demands on soldiers and equipment have increased many times over; the need to be able to ward off cyber attacks, to be active in the entire area of ​​cyber defense, brings a completely new and again cost-intensive field. It is therefore right that the Federal Government should continue on this path in accordance with the agreements made in the NATO alliance.

Flosdorff: From the perspective of the Bundeswehr, too, it is very important that we do not lose sight of this goal by the middle of the next decade. The Bundeswehr has a lot of catching up to do in terms of equipment. Parliament sends our soldiers on missions. I think everyone knows that this also means that they have to be adequately equipped so that they can do it properly. There is an incredible need for modernization. The vehicle fleet, some of which dates back to the 1980s, needs to be modernized. Radios must be replaced across the troops. These are all billion-dollar projects. I'm not even talking about new challenges such as cyber and the necessary digitization. All of this has a huge need for modernization and investment. Anyone who sends the Bundeswehr on missions must also equip them.

Additional question: Mr. Flosdorff, you forgot the ammunition requirement. Only that we still have it.

I want to put the question very simply: Do the Chancellery and the Ministry of Defense agree with the Foreign Minister's formulation "There is no binding two percent target"? Just: yes or no.

StS Seibert: You won't make me accept sentences here or not. As the Federal Government, we are unanimous - the Foreign Minister has also said this several times - to act in accordance with our commitments to NATO. We did this in this legislative period. By the way, we all in the Federal Government know that, as necessary as it is to strengthen our Bundeswehr, to further equip it and to provide it with more money, it is also necessary to make other efforts to ensure security. Development aid is also a security effort; the training of, say, African states to look after their own security or regional security is also a commitment to security. All of that counts too. But we - the Federal Chancellor, then Foreign Minister Steinmeier - are completely in agreement on the goal that we jointly affirmed in Wales.

Fischer: You can also see the position of the Federal Government in the medium-term financial plan, in which the corresponding financing approaches are presented.