How are zebra horses

"Don't dream your life, live your dream" is easy to say. Svenja from Loesdau E-Commerce did it. She has always had a special passion for zebras. Last year she fulfilled her greatest wish and bought a Zorse. In doing so, she has come a long way and has taken a lot to finally realize her dream:

“I've loved zebras for as long as I can remember. My children's room was full of zebra pictures, in every friend's book the favorite animal read 'Zebra', and many of the birthday cards I received were striped. I've always felt a very special connection to these animals and as a child I always said: “At some point I'll have my own zebra”, of course that was never really taken seriously, but I always believed in it. That's why it was clear to me after graduating from high school that I wanted to go to the home of my favorite animals in order to see them in the wild - to Africa.

In addition to the zebras, horses played a big role in my life. I started riding as a kid and it was no wonder I was totally thrilled when I first heard about Zorse. The word "Zorse" is made up of "zebra" & "horse", a mix of zebra & horse. Most of the time, the mare is a horse and the stallion a zebra, as it is easier for the foal to orientate itself on a relaxed mare from an early age and to learn from her. Zorse were originally bred because they are considered extremely hardy.

Nobody decides overnight for half a wild animal like this. It's definitely a very long road, but I was ready to go. My friends know how long I've had this dream in my head and how much I've done to make it come true. For years I have been in contact with Tayo's breeders and other Zorse owners. That was indispensable, because before you decide on a Zorse, you really have to deal intensively with these animals.

The plan to have a Zorse with me became clearer and clearer. So if I'm already fulfilling this dream and taking on a lot for it, then it shouldn't be just any anger. No, everything should fit 100%. I already had precise ideas about how it looked. In terms of character, nobody can predict how it will develop (more horse or more of the zebra) - my Zorse should be light, relatively tall and a stallion. I accepted that it could be a long time before I find my Zorse.

But I was especially looking forward to the birth of a foal this year. A mare that I had already fallen in love with was pregnant. I will never forget that day when I got the news that her foal was born - light, relatively big and a stallion! At first I couldn't believe it, my pulse was infinitely high and I had tears in my eyes - with happiness!

Since I don't have my own stable - my trotter Diamond is also hired - there was still a big problem. Zorse foals must have contact with people from the start and gain trust, otherwise they will become shy and a foal pasture is out of the question after weaning if the management and daily interaction are to work later. Luckily I have a great stable owner! She agreed to bring the Zorse foal to our stable and our journey together could begin.

I gave the little one the name “Tayo”, which in Nigeria means “the lucky one” or “born to be happy”. Because that's exactly what it should be - that's my goal! Compared to horses, Zorse are more skeptical and, above all, much more sensitive. They perceive the smallest fluctuations in feelings, react to them and show it clearly. If a zorse doesn't want to work with you, then don't. You have no chance of preventing that. The only way is to create a lot of basic trust and to work everything out without pressure. Either a Zorse works with you voluntarily or not.
That's why I spent several hours in the stable, just went there, watched him and then started hand-feeding and holster training step by step. Months have passed before the halter can be put on and taken off without any problems. The normal for every horse owner was the greatest success for me!
With a lot of patience and without pressure, it went on: leading, going backwards, turning, tying up, cleaning, ... and there were some difficult situations that I had to master. Tayo not only galloped away through the stable at full speed once, I didn't just hang out once. Even fences don't hold back a little anger, so it went through the paddock fence and Tayo couldn't withstand the paddock fence either. With the proportion of wild animals, they simply have a much greater instinct to flee than horses and develop enormous strength.

Tayo is now seven months old, has integrated really well into his new herd, can be harnessed, led, tied, hooves and cleaned without any problems. He learns so incredibly quickly and, like all Zorses, is very intelligent. Nevertheless, everything has to be built in as small steps as possible. At the beginning it is worth praise and a break if, for example, a new brush is half a meter away and it stops. So I kept feeling my way until the brush was allowed to touch him. It's now faster with new items because he trusts me. Still, I start the same way with each new item.

I was aware from the start that a difficult path would lie ahead of me and that I would often reach my limits - but to be honest: that doesn't stop me from living my dream. I'm really looking forward to Tayos and my common path, I'm curious about the challenges that lie ahead and what we can achieve together. To be able to ride him at some point would be the most beautiful thing - but I have no idea whether that will ever work - we'll see where the journey leads. 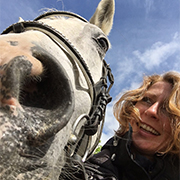 My passions of writing and horses are perfectly balanced at Loesdau. Since November 2011, press and public relations, internal and external communication as well as social media have been my professional “playing fields”.