What happens when extraterrestrial spirits see 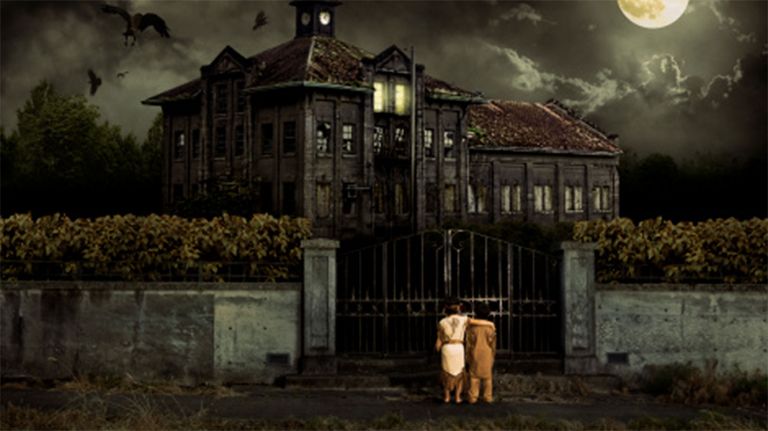 Ghosts are a matter of the mind, say scientists - and research into the neurobiological causes of haunted stories and other eerie phenomena.

In 1947 the psychologist and behaviorist Burrhus Frederic Skinner published a study entitled "Superstition in the Pigeon", a classic in psychological research. Skinner had placed individual hungry pigeons in a cage, into which food was poured through a funnel at regular intervals. The timing of the feeding was precisely determined and was not influenced by the behavior of the birds. Nevertheless, the pigeons began to repeat the sequences of movements that they had made shortly before the feeding - obviously due to the belief that their behavior was causally related to this. If there was food again in a relatively short period of time, the behavior was conditioned: the birds saw their assumption confirmed. Skinner called the phenomenon "superstition".

“There are many analogies to human behavior,” he writes: “Rituals used to turn luck when playing cards are a good example. A few random connections between the ritual and desired consequences are enough to build and maintain the behavior, despite the many cases that do not support it. " Even with superstition, the expectation seems stronger than the reality.

Experience of God in the Laboratory?

The American neuroscientist Michael Persinger from Lauretian University in Canada stimulated the temporal lobes of test subjects with weak electromagnetic fields in a study from 1990. The participants then increasingly described a feeling as if there was “a heavenly being in the room”. The study quickly found its way to the public, as it attributed a role to the brain in mystical experiences such as experiences of God. However, it could not be repeated by other researchers in the following years - a bad sign, since the replicability of studies is a key requirement for technical correctness.

A study at Uppsala University in 2005 shook the theory even more. Just like Persinger before, the Finnish researchers stimulate the brains of their test subjects with magnetic fields. In fact, half of them reported spiritual experiences. However, this also applied to control persons in whom the magnetic fields were not active at all. Accordingly, the following also seems to apply to experiences of God in the laboratory: expectations count.

A house in the middle of Athens, large and spacious, but still cheap - that was highly suspect even in antiquity. When looking for a flat in the metropolis, Athenodorus first hears about what the building is all about. It is a haunted house, he learns and decides to get to the bottom of the matter. Athenodorus takes a stand in the gruesome walls. He doesn't have to wait long: he soon hears steps and the rattling of chains in the silence of the night. When he looks up, a ghost stands before him.

The story of Athenodorus is probably the first ghost hunt ever documented in writing - recorded by Pliny the Younger (61–113 AD). Pliny threw the report into massive doubts at the time, since he had been convinced that haunted stories were nothing but figments of the imagination.

Common sense and spirits do not go together. Nevertheless, according to a survey from 2011, ten percent of all adults in Great Britain, Europe's haunted stronghold, are convinced that they have already met a ghost. At least 15 percent think this is possible, another 19 percent are not sure. And even in Germany, at least eight percent of adults profess to believe in ghosts, as a survey by the Allensbach Institute for Demoscopy showed 15 years ago.

For researchers like Richard Wiseman from the University of Hertfordshire, that's reason enough to go on a scientific ghost hunt. Fascinated since childhood by looking behind the scenes of the apparently inexplicable, the Briton asked in 2003 to a rendezvous with ghosts at the royal Hampton Court Palace in London and in the vaults of the South Bridge in Edinburgh. A total of 462 volunteers with and without haunted experience accepted the invitation and wandered through the eerie buildings. Almost every second person wanted to have experienced something unusual - from a cold shiver to the presence of an invisible person to a ghostly touch.

Wiseman himself then moved through the walls with all kinds of measuring devices. The result: At the places where there had been more and more strange "encounters", he often detected abrupt temperature differences, suddenly changed lighting conditions or winds whistling through bricked up doors. Wiseman also suspected that infrasound could play a role - extremely low tones that the human ear hardly registers, but which trigger vibrations in the body. They arise, for example, when air whistles through chimneys or crevices. In fact, in a further experiment by Wisemans, test subjects felt more fear or chills when he added infrasound waves to music. The low notes could therefore be responsible for some of the spooks. 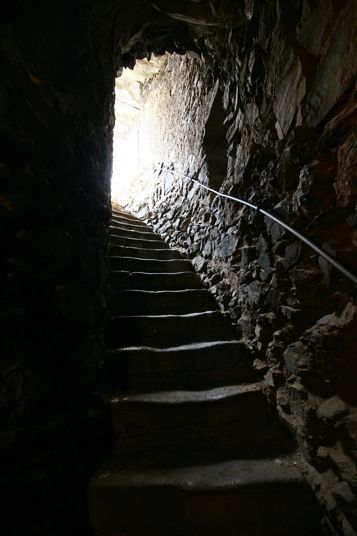 Sudden heat gradients, draughty corridors or flickering light lead to creepy feelings and ghostly appearances in some people. Often, however, there is also an expectation behind it, as researchers discovered. © AlienCat - Fotolia.com

The actual ghost stories, however, rhymes with the brain, suspects Justin Barrett, psychology professor at the Fuller Graduate School of Psychology. The human organ of thought is highly specialized in looking for explanations for what is happening around it - an important skill also for interpersonal relationships. In doing so, however, it tends to overinterpret - and sometimes even ascribes an intention to act to inanimate objects ("In the head of the other")

A prominent example of this is an experiment by the US psychologists Fritz Heider and Marianne Simmel from 1944. They showed their test subjects an animated film in which two triangles and a circle moved sometimes together, sometimes individually into a box and then out again. After a short time, the test subjects believed that they recognized an action in the actually meaningless goings-on. They saw love stories and family dramas and finally the hoped-for happy ending. “One reason why people believe in gods, ghosts and goblins lies in the way our brain works and especially in its action recognition unit,” concludes Justin Barrett in his book “Why would anyone believe in God?” (translated: Why should anyone believe in God?).

So are ghosts a matter of the mind? At least that's what Christopher French from Goldsmiths University of London is convinced of. In 2009 he and his colleagues built a “haunted room”, a room in which the researchers could expose their test subjects to infrasound as well as electromagnetic fields at the push of a button. Some haunted locations have unusually strong electromagnetic or geomagnetic fields. That is why theories keep popping up that ghostly apparitions could be related to precisely those fields. However, this is quite controversial. Because electromagnetic fields vary enormously across the globe. In addition, it is still unclear whether they are strong enough to affect the human brain at all.

Nonetheless, French wanted to investigate its possible effect: The test participants - warned in advance that they could get scared - were asked to precisely record their impressions in the room. In fact, most of them reported a strange feeling afterwards, some even of real horror.

The surprising thing: infrasound or electromagnetic fields were only activated in half of the test subjects. Nevertheless, the other participants also shuddered, and to the same extent. The whole ghost was therefore primarily a product of their expectations. "We do not want to rule out that electromagnetic fields, for example, have an influence on the brain and can even trigger hallucinations," says study leader French. "But the more suggestible people are, the more likely they are to experience something strange if you prepare them for it."

French believes that the temporal lobe may be involved in the self-suggestion. This region of the brain fulfills hearing, speaking and memory functions and can be the center of epileptic seizures. The American cognitive researcher Michael Persinger even ascribes a role in the experience of God to the temporal lobe - but this is very controversial (see info box).

The neurologist Olaf Blanke from the Swiss Federal Institute of Technology in Lausanne also made an astonishing discovery in connection with the temporal lobe. During an epilepsy diagnosis, the researcher placed electrodes in a patient's brain. When he stimulated the edge of the left temporal lobe in this way, more precisely the temporo-parietal junction, the young woman claimed that she perceived an invisible person behind her. If she embraced her knees in this state, she had the feeling that the strange shadow figure was embracing her.

A few years earlier, in 2002, Blanke observed a similar phenomenon when stimulating the right angular gyrus, which is also located at the junction of the temporal and parietal lobes. In this case, the patient at the time saw herself. Experts refer to such self-experiences as heautoscopy, a special form of visual hallucination. Possibly, as Blanke argued in the journal Nature in 2006, the brain sometimes gets confused when distinguishing between “self” and the outside world. Shadow people and doppelgangers are therefore a misperception of one's own body.

In fact, the temporo-parietal transition region is entrusted with processing self-perception, among other things. Scientists such as the neuropsychologist Erich Kasten from the MSH Medical School Hamburg suspect that overload and fatigue can cause the nerve cells in this area to fire uncontrollably and thus create the illusion of the doppelganger. 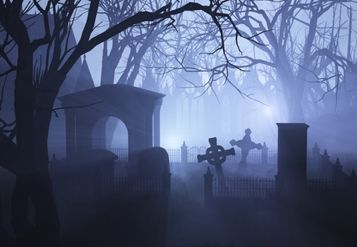 Why is the witching hour at night? Researchers suspect that particularly vivid dreams on the border between sleep and wakefulness frighten people. © stakaz - Fotolia.com

The question remains why so many people think they are haunted by ghosts, especially at night - at witching hour. US psychologist Susan Clancy from INCAE Business School thinks she has found an answer to this. In 2005 she wrote a book about people who were convinced that they had been kidnapped by aliens at night. Her interviewees, she says, were normal people from all walks of life. So there was no question of crazy nuts.

Clancy's assumption: Behind the eerie nocturnal encounters are so-called hypnopombe hallucinations, vivid and mostly frightening dream images that occur during the waking up phase. If they appear when falling asleep, one speaks of hypnagogic hallucinations. However, the person concerned is always in a state between waking and sleep and cannot distinguish between illusion and reality.

“Often there is also sleep paralysis, an almost complete inability to move during the dream phases,” explains sleep researcher Helen Slawik, medical director of the diagnosis of sleep disorders at the University Psychiatric Clinics (UPK) in Basel. “The body is still asleep and is more or less paralyzed 'while the mind is already present. "This is very frightening for those affected: For example, they see a person in the room, but cannot move." It is no wonder that many then believe that the nocturnal stranger has drugged them or carried out eerie medical experiments on them.

“Such hallucinations in the transition between waking and sleep occur more frequently in narcoleptics,” says Slawik. Narcoleptics are people who suddenly and suddenly fall into a sleep-like state. In healthy people, for example, sleep deprivation or psychological stress can be triggers. The next morning, the nocturnal experience often still seems very real.

Ultimately, the dream hypothesis could also explain why haunted phenomena are so different in different cultures: People tend to incorporate things they deal with into their dreams at night. And those who devour vampire novels before going to sleep need not be surprised when an undead bloodsucker appears by their bed at night.