Every dog ​​owner knows them well ... dog toys that squeak when they bite. Some people are driven crazy by this sound, others find it funny. But what do our dogs think about it and can they play with it without hesitation? You can read everything about squeaky dog ​​toys here.

Why do some dogs like squeaky dog ​​toys while others don't?

Dogs who play with such a dog toy for the first time are often frightened when they squeak and are more likely to feel insecure. This is also quite natural, because it sounds similar to the "stop signal". Dogs emit this brief squeak or whine while playing, for example, when it gets too wild or hurts, so the play partner knows that he has to drive down a gear. If he does not do this, the bully is threatened with consequences, usually in the form of an interruption of the game or a threat.

The noise can also arouse the curiosity of some dogs, so you can motivate them to train. However, some dogs get too involved and never stop biting into the dog toy. Not only is this a test of nerves for you, but it can also be extremely stressful for the dog. 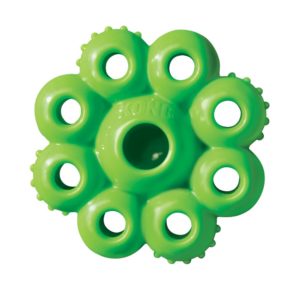 The Kong Quest is perfect for chewing games and can be filled with treats.

When are squeak toys rather unsuitable?

Tip: You can pierce the squeak with a needle and it becomes a normal dog toy 🙂

If your adult dog has fun with squeaky toys, you can let him play with them from time to time. This type of toy is less suitable for puppies, easily excitable dogs or four-legged friends who tend to chew the dog toy so playing with it.