How is Animoto used in the classroom

On February 18, 2011, the Neue Luzerner Zeitung published an article in a dossier on the subject of "Computers in School" with information about the ongoing 1to1-computing pilot project at the Guttannen School. Below is an excerpt from the article (published with the kind permission of the editors):

The classroom of the future 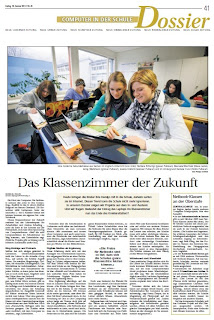 Today the children bring their cell phones to school and surf the Internet at home. Schools can no longer ignore this trend. In our dossier we show projects from Germany and abroad. And we ask: Does the introduction of the laptop into the classroom mean the end of the Cretaceous Age?

One child, one computer. The experts call this “One to One Computing”. This is reality in a small mountain village in the Bernese Oberland. Guttannen has 320 inhabitants. Each of the sixteen 5th to 6th graders has had their own net or notebook since last summer.

The teacher couple Urs Zuberbühler and Andrea Scherling realized this classroom of the future - probably as the first in Switzerland at primary level, and without sponsorship of computer companies. "Because the eight computer boxes in the classroom were in the way," as Zuberbühler says. So far, there have only been similar projects in higher school levels.

A lot has changed in Guttannen since then. The teacher places teaching materials in the virtual "drop box", to which the students have access. You create blog entries, podcasts, a virtual school diary. The word dictation is individualized. Zuberbühler makes a sound recording for every student, so everyone can practice what they can't yet. The dictation is listened to via the netbook.

School-free due to avalanches, which used to happen often, will no longer exist in the future. The orders and worksheets are sent via the Internet to those who are cut off from school. Once filled out, the sheets come back to the teacher via the Internet. The class exchanges ideas with a French-speaking partner class from Valais via a joint working platform. The netbook would also be suitable for “Franzwörtli” queries. The students are "very motivated to work with the computer," says Zuberbühler.

Nevertheless, the school hours in Guttannen are probably closer to conventional lessons than one might assume. "We make music and do gymnastics without a computer, and otherwise the notebooks are only used in between," says Zuberbühler. On average, the children sit in front of the screens for two hours a week.

Digital media as a supplement

This experience coincides with the statements of various experts who took part in a specialist conference on “One to One Computing” in Goldau last week. For Beat Döbeli from the Institute for Media and Schools at the University of Teacher Education Central Switzerland in Goldau, one thing is clear: “Pencil and school books will continue to have their place in the classroom. Digital media are added to this. "

An addition, however, which one can no longer do without in the future. “The children bring their cell phones to school, and in their free time they surf the Internet. We cannot ignore the fact that these media are part of their lifeworld. " One to One Computing has long been a topic in research, but now the time has come to introduce it across the board. “Netbooks are now so small, mobile and light that they fit in the hands of children. The prices are so low that schools can afford whole class sets, ”says Döbeli. Teacher Zuberbühler, for example, bought the netbooks for his class on the Ricardo auction platform for 230 francs each. “It was possible to purchase it using the normal school budget,” he says.

But what does the change mean for students and teachers? "The school is losing its learning sovereignty," says Ben Bachmair, professor at the University of Kassel. "More and more schoolchildren can no longer learn with the current model in which the teacher simply transfers knowledge."