What happened to Italy after World War II

Italy in World War II:
Italy's entry into the war 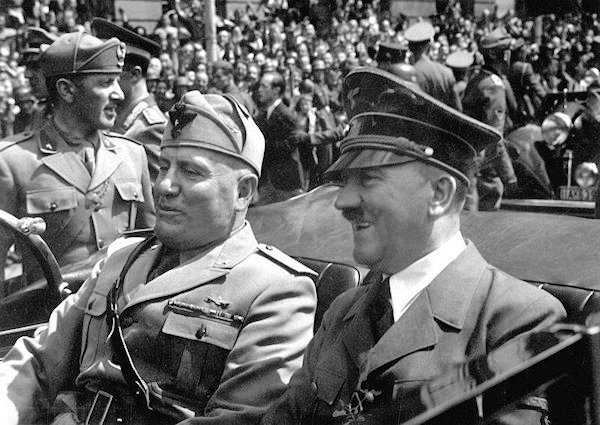 Benito Mussolini and Adolf Hitler, Munich 1938, one year before the start of the Second World War
Photo: Eva Braun Collection

The "Rome-Berlin Axis" and the "Steel Pact":

In the 1920s and early 30s, the fascist Mussolini, who came to power in 1922, was still relatively skeptical of Hitler, and at first he did not share his racial theory either. When Hitler came to power in 1933, however, Mussolini quickly realized that he had thoroughly underestimated Hitler: the speed and severity with which Hitler established his dictatorship in Germany instilled him respect.

When Italy was exposed to fierce international criticism due to its brutal actions in violation of international law in the Abyssinian War of 1935-36 (see below), it was only supported by Hitler's Germany and that led to an initial rapprochement and a secret agreement on closer cooperation between the two states, Baptized by Mussolini "Axis Berlin-Rome".
From the beginning Hitler worked single-mindedly towards a war and although Italy's foreign policy was by no means peaceful, the country was not prepared for a war as Hitler intended. From a military point of view, Italy was pretty much bled to death by its lavish colonial adventures and the majority of Italians had absolutely no desire to be drawn into a war of unpredictable proportions. That is why Mussolini initially did not want an explicit military pact with Germany. But the increasing aggressiveness of German foreign policy between 1938 and 1939 put him under pressure, he had to prove that he was not a "coward". At the end of May 1939, three months before Hitler started World War II with the attack on Poland, the "Axis" became a "steel pact" (that was also a word created by the Italian dictator), which now provided for mutual military assistance even in a war of aggression.

The illusion that this "steel pact", which Japan joined in the same year, was based on mutual respect lasted only a very short time. By the time the pact was signed, the German plans to attack Poland had already been worked out, but Mussollini was only informed a few days before September 1st. Hitler did not want to be fooled by anyone, Italy should only serve as support for a war in which Hitler dictated everything: tactics, strategy and war aims. 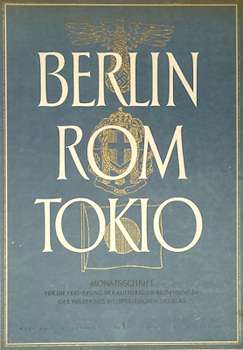 The lavishly designed, German-Italian magazine "Berlin-Rom-Tokio", which appeared regularly between 1939 and 1944 and which accompanied the close collaboration between the three countries.
Source: Wikimedia Commons

The wars before the war:

Mussolini's dream was to give Italy back the power that ancient Rome had. His "New Roman Empire" initially strived for domination in the Mediterranean region. As early as the 1920s, he had a naval base built on the Turkish island of Leros and occupied Libya between 1923 and 1932. Between 1935 and 1936, Italy conquered Abyssinia (today's Ethiopia) In Libya as well as in Abyssinia, the Italian army used poison gas on a massive scale and did not stop at mass liquidation of the natives and the burning of villages, cattle and fields. Mussolini also got involved in the Spanish civil war (1936-39) by taking the Provided strong military support to putschists under General Franco against the democratically elected republican government. Albania was finally occupied in April 1939. But these were only "small" wars compared to what was to follow.

When Hitler started the war on September 1, 1939, Mussolini was by no means happy, his country was at that point still absolutely unable to intervene in the war. While the "Steel Pact" was being signed, Mussolini had pointed out to Hitler that Italy would not be ready for war until the end of 1942 at the earliest. It was only with difficulty that Rome succeeded in breaking free of the contractual obligations of the agreement without breaking it openly. Italy finally announced the "Nonbelligeranza": Italy should not be "neutral", but "non-belligerent". But Mussolini did not want to wait too long either; Italy should be among the victors of the war that had just begun at all costs.

Through a feverish armament and massive war propaganda, he tried to make Italy materially and psychologically fit for war. On June 10, 1940, when the outcome of the war seemed more or less certain after Germany's successful "Blitzkrieg", Italy declared war on England and France. The tragedy of World War II had now begun for Italy too. In the end, Italy suffered over 400,000 deaths.

For the eighth time in a row: