Egypt is controlled by Israel and America

Many injured in new violence on Jerusalem Day

New clashes between Palestinians and Israeli security forces broke out on the Temple Mount. Images transmitted over the Internet showed police using stun grenades, tear gas and rubber bullets at stone-throwing Palestinians outside the Al-Aqsa Mosque. 305 people were injured, seven of them life-threatening, according to the Palestinian Red Crescent. Almost 290 people were treated in hospitals. A police spokesman in Jerusalem said 21 police officers were injured.

After the violent clashes over the weekend, there were fears that violence would escalate again on Jerusalem Day. In Israel, the conquest of East Jerusalem in the Six Day War in 1967 is celebrated on May 10th. The annexation is not recognized internationally.

The previous evening, predominantly young Palestinians had demonstrated at various locations in East Jerusalem. There were repeated violent clashes with the security forces, including at the Damascus Gate, in front of the Al-Aqsa mosque and in the Sheikh Jarrah district. The most recent protests began there at the beginning of the weekend. It was triggered by the threat of evictions from homes claimed by Jewish Israelis.

An evictions trial scheduled for Monday has been postponed, according to Israeli Attorney General Avichai Mandelblit. A new meeting should be scheduled within 30 days. 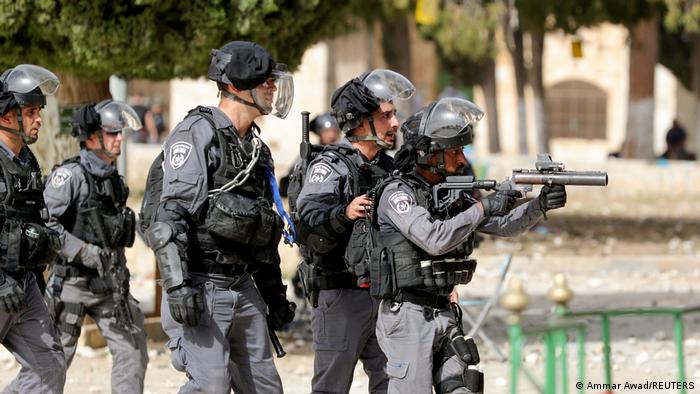 The situation worsened over the weekend. More than 300 people were injured in the worst clashes between Palestinians and Israeli security forces in years. Protests have also been reported from several other cities, including the Israeli port city of Haifa, where arrests were made after demonstrators attempted to break a police cordon.

In view of the growing tensions, the UN Security Council wants to address the violence in Jerusalem in a closed session this Monday. UN Secretary-General Antonio Guterres said he was deeply concerned about the violent clashes in Israel and the possible eviction of Palestinian families from their homes. He asked Israel to stop further evictions.

The USA also expressed concern. The National Security Advisor to US President Joe Biden, Jake Sullivan, stressed in a telephone conversation with his Israeli counterpart Meir Ben-Shabbat that the US is trying to de-escalate, the White House said. The US is concerned about possible evictions of Palestinian families in the Sheikh Jarrah district. 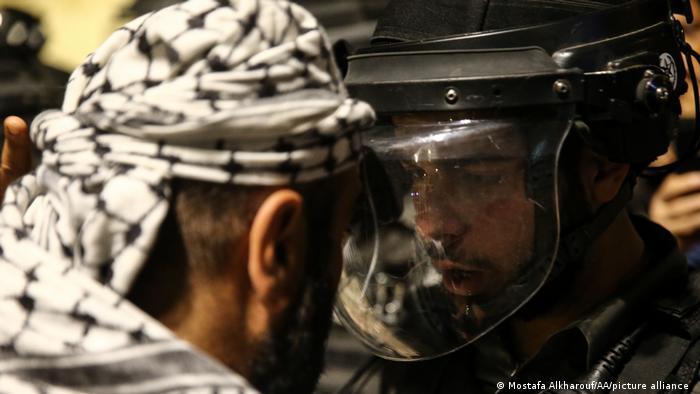 Face to face: a Palestinian and an Israeli policeman face each other

Israel's Prime Minister Benjamin Netanyahu, meanwhile, defended the actions of the security forces and assured that Israel would act decisively to enforce "law and order". All six Arab countries that have diplomatic relations with Israel - Egypt, Jordan, the United Arab Emirates, Bahrain, Morocco and Sudan - condemned the Israeli approach. Jordan and Egypt summoned the Israeli ambassadors to protest against the Israeli actions at the Al-Aqsa mosque. 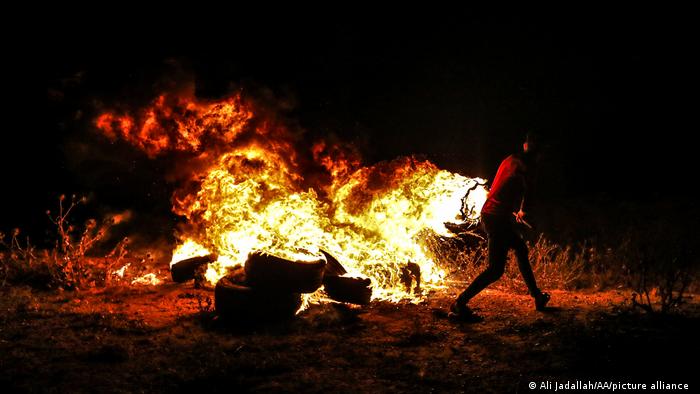 Despite the international calls for de-escalation, no relaxation is in sight: a march by Jews is planned on Monday afternoon in memory of the Israeli occupation of East Jerusalem in 1967. However, fearing renewed violence between the two sides, the Israeli police forbade Jews from entering the Temple Mount during flag marches through the Old City.