Power of Habit: How habits determine our lives

If we repeat behavior or ways of thinking over and over again, they become habits, i.e. actions that we carry out automatically, many of them even on a daily basis.

How strongly habits influence our lives becomes clear in the following examples:

Ben always keeps a close eye on his virtual mailbox and says he is well versed in multitasking. E-mails are scanned when making calls and in meetings, even on the couch in front of the television, where he should relax. If the small red number pops up on the mailbox, he clicks immediately. "You have mail."
Ben has got into the habit of always reading e-mails immediately - not necessarily carefully, not to deal with them immediately, but just to know what it is about. The power of habit drives him to do so. However, this behavior distracts him from the tasks he was actually trying to concentrate on. He feels stressed, chased and enslaved by the small letter symbol.

Daniel is a passionate motorcyclist. The freedom, the adrenaline, to really lean into the curves - that's his thing. He no longer has to think about when to shift into next gear, how to operate the indicator or brake. Everything runs automatically, everything is done correctly.

Habits determine our everyday life - some make it easier, some are even vital for survival, but some are also harmful or annoying. It depends on whether they are in line with our goals or just rob us of energy and time, even damage our health. 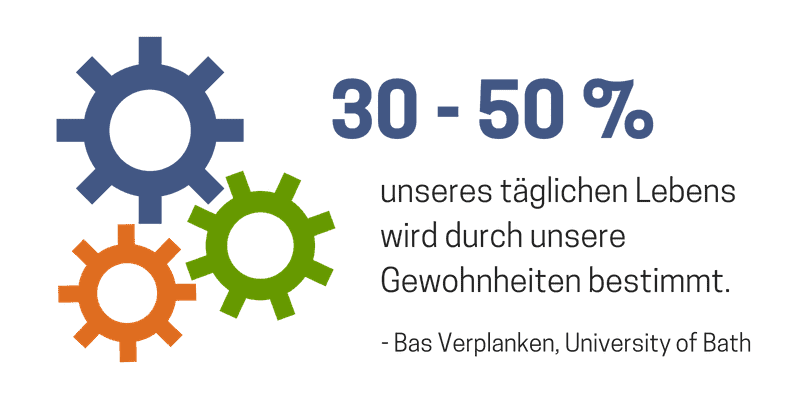 Without habits, we would be lacking in routine. According to Bas Verplanken, a professor of social psychology at the University of Bath in England, between 30 and 50 percent of our daily actions are determined by habits (source: zeit.de). Are you successful or not? Result of your habits. Are you happy or not Everything you do, everything you are, is the sum of your habits.

The conclusion from this realization: You are in control of your life. Get rid of old routines that harm you and work on new ones that enrich you.

How do I know which new habits would enrich my life?

Sooner or later each of us comes to the point where we make a decision: changes are needed.

The consequence of this decision is that we set goals - mostly too high. We decide to turn something inside out, to do something completely “new”, preferably tomorrow. The motivation is high at the beginning, but then continues to decline. It's just too difficult, too strenuous.

Continuous change is a product of daily routines, there is very rarely a "once-and-never-again solution".

The flow of habits: the habit loop

If the result is positive, you will (want to) repeat the process the next time you perceive the trigger, then over and over again until the action has become a habit.

"You can achieve anything if you just really want to" - I am an absolute advocate of this motto. But I am also aware that there are “hidden forces”, as I like to call them, that influence our lives, shape habits and make us who we are.

If something goes wrong, we are only too happy to blame those around us. In doing so, however, we forget that our environment can also support us in the opposite case in doing or not doing something.

What do I mean by that?
Do you find yourself looking at your smartphone all the time while working and getting distracted? Then put it in the next room, put it in a closet, turn it off.

Are your eyes always bigger than your stomach at lunch? Then take a smaller plate with which you will automatically eat less. You decide!

Our environment is like an invisible hand that shapes our human behavior. We believe that our habits are the product of motivation, talent and hard work.

And that is certainly not wrong, but we forget that our environment has a strong influence on us. In this way, the only unfavorable living conditions or financial restrictions can prevent us / you from reaching our full potential.

You won't find it easy to concentrate when your chair is uncomfortable. How do you want to be organized if you don't create a system for your tasks? How can you conduct open appraisal interviews if you don't have a good relationship with your employees?

People who easily stick to good habits often have an environment that encourages this behavior. If you want to change your behavior, then start by changing your environment. Optimize your work environment!

Your genes / your innate behavior

Not all of us have the character of Usain Bolt and can sprint the 100 meters in under 10 seconds. Goethe was intelligent, no question about it, but he lacked an understanding of mathematics.

Sure, we can learn a lot, but we all have strengths and weaknesses, talents that are innate. Everyone has been assigned a certain deck of cards at some point and it is our job to get the most out of them.

The good news: Even if some of our strengths are genetically determined, with willpower and passion you can achieve (almost) everything you set out to do.

You can train a certain behavior, you can acquire knowledge and work on your soft skills, i.e. on your emotional intelligence.

An example:
Friedrich leads a small, five-man IT team. He loves his job and also the challenge. It is just that it is not always easy for him to be a good manager. "By nature" has always found it easier for him to read a programming language than to understand body language. Listening has somehow never been his thing. He is too easily distracted, the head is always working on some math problem. His team naturally senses the absenteeism during conversations and feels that they are not valued as a result.

Friedrich resolves to change this situation and works intensively on his habits and his ability to listen to his colleagues. Soft skills like these can be learned and make a person a better leader, but also a better person.

How do you recognize yourself?

What attitude you have - your mentality plays a decisive role in building new habits.

Typically, goal setting works like this:
Aim: In the future, meetings should always start on time.
Action: You save a reminder note for the appointment in your calendar so that you don't appear too late in the conference room too often.
but:
You as a personality: Likes to stroll and quickly chat in the corridor. You don't really know why you're always late.

Instead, start the whole thing by thinking, "Who do I want to be?"
so:
Person I want to become: always on time - you will not deviate from that.
Action: You save a reminder note in your calendar so that you don't appear too late in the conference room again. There are no excuses. You kindly let the colleagues in the corridor know that you are on your way to the meeting and cannot chat at the moment.

Result: In the future, meetings will always start on time.

The last point was about your attitude, which has to be right if you want to integrate a new habit into your life. But what can you do if that doesn't seem to fit?

You want to organize yourself better, but you keep falling back into your old pattern “I'll just leave the email here instead of moving it to the appropriate folder”. Force of habit! Organizing is not that important to you.

One of the forces influencing the shaping of routines is positive "feedback". So if you notice how a tidy inbox helps your day-to-day work and makes you faster, your attitude will also change.

We humans want to see results. We want to be validated or just feel good - whatever the trigger. If you want to establish a new habit, it is important that you reward yourself every time you have successfully performed an action.

Warning: you don't always have to be perfect!

Often we have a “completely or not at all” attitude.

An example: Franzi leads a team of 15 employees. There is chaos on her desk. She basically has more tasks than she can handle, and it is difficult for her to give up even one of them. There is still stress, overtime and, in the end, the feeling of not having achieved everything.

“That has to change!”, She thinks to herself and resolves to delegate something every day in the future, to gradually shovel herself free and to let it become a habit. After just five days of doing this, she comes across a task that she would rather do herself. She wrestles with herself. Just do it quickly or hand it in completely?
Franzi brings a colleague into the office, explains the task and hands over parts. She still does some things herself.

Is Franzi's goal of acquiring delegation as a new habit now over? No! Even if you "slip" once or twice on your way, that does not mean that you have to start over or give up. A habit can arise even if you are not perfect every day, not every day.

How do you manage to integrate new habits into your life?

In this post, you've heard of the habit loop, the power of habit, and the hidden forces that shape habits. How can you now apply this knowledge for yourself? How can you change habits?

This topic is incredibly interesting and, as I said, affects all areas of our lives. So there is a lot to say about it. In my next blog post I'll tell you how to put all this knowledge into practice - change habits, get rid of those that drag you down, and introduce new ones that enrich your life.