What is a photographic plate

A glass negative is the result of an ancient photographic process that has been practically extinct for about fifty years. A glass plate to which a photochemical emulsion has been applied is used as the recording medium in a so-called plate camera. The development of this industrially produced photo plate results in a glass negative in which the finished negative is firmly connected to the glass plate as a carrier. Similar to today's sheet film from large format view cameras, exactly one image fits on such a photo plate - a significant difference to contemporary and modern celluloid films in small and medium format.

Like the cameras required for this, photo plates were available in various formats, sizes of 9 × 12 cm or 6.5 × 9 cm were widespread, but there were also smaller and larger glass plates. In amateur photography in particular, images were extracted in their original size (i.e. not enlarged), which explains these quite impressive formats. They were sold in light-proof cardboard boxes of ten or a dozen. 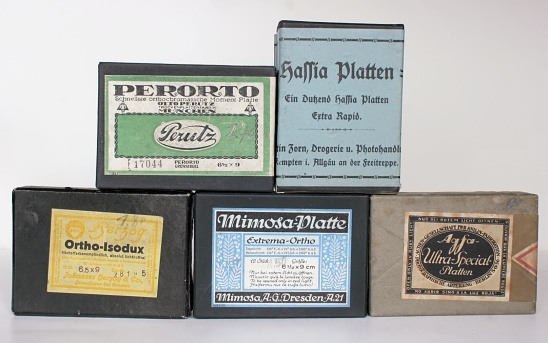 The old photo plates that are commonly found today are almost exclusively so-called gelatine drying plates. They were invented in the early 1870s, and they quickly caught on due to their higher sensitivity to light and better durability and portability compared to older methods. From around 1910 onwards, most of them were provided with panchromatic black-and-white film, which enabled them to react evenly to all wavelengths (colors) of light and make a "natural" black and white photo possible as the end product. Over the years, the sensitivity has been increased so that in the 1920s and 1930s film speeds of the converted ASA / ISO 10 or 12 were common. In spite of this, exposure times were required a good eight times as long as with today's "slow" ASA / ISO 100 films!

As a photographic medium, photo plates are characterized by a number of advantages and disadvantages. Their heavy weight and awkward handling were certainly annoying for the photographer. The individual photo plates had to be put in metal (or wooden) film holders in the dark, which were then used individually in the camera. An unnoticed mistake in adjusting the exposure or focus could ruin the picture, which of course was expensive fun. The photo plates were also difficult to develop because, unlike normal films, they could not be rolled. In addition, from the end of the 19th century there was a more practical medium in the form of films with celluloid as a carrier material, which was initially of poor quality, but outstripped the old photo plates by 1930 at the latest (e.g. under the aspect of film sensitivity and manageability). The finished glass negatives were of course still relatively heavy, took up a lot of space and were of course fragile (since they are made of glass).

Still, photo plates also have advantages. In contrast to celluloid, the glass carrier material is practically insensitive to external environmental influences such as heat or chemicals, which means that glass negatives have a significantly longer service life if stored well. They do not kink or curl, eliminating the need for film flatness and also making them easier to peel off. Last but not least, they can also be digitized without any problems using a flatbed scanner with a transparency unit. Their low film speed today has the advantage that - if they have been correctly exposed and developed - they are incredibly fine-grained and even the smallest details can still be recognized. Their large format often leads to fantastic gray gradients and very beautiful blurring.

In contrast to the vast majority of celluloid films, their carrier material is absolutely clear, which means that glass negatives when held against a light source immediately reveal their beauty. They are consequently an extremely aesthetic and, in a certain way, quite resilient medium. Precisely because they were also often used by photo amateurs in their private lives, they are now literally a window into a bygone world. However, it was also in the nature of the medium that the complicated and expensive photo plates were reserved for special occasions such as family get-togethers, which is why real snapshots or everyday shots are rather rare with glass negatives.
... this website:

This website is an attempt to make a small private collection of glass negatives visible. Fortunately, old photo plates are still quite common and not too expensive to find, which makes them cheap and often surprising collector's items. But so that the pictures I have collected don't disappear in some boxes in some cupboards, I set about scanning the individual photo plates with a simple flatbed scanner.

Because some glass negatives not only show boring family get-togethers for outsiders, but they also provide an interesting insight into the everyday life of more or less normal people. Many motifs are banal and often clumsily photographed, but content that is relevant to micro- or social history is shown. And some pictures are just too beautiful to not show them.

Most of the glass negatives were bought from private and commercial dealers in Germany. They are more or less loosely organized in the form of loose "packages", whereby it is assumed that the photo plates that belong together were made by the same photographer in the same environment in the same period of time. This assumption is not entirely solid, but the presentation is based on the hypothesis that there is a certain connection between the photographs that were acquired together.

But in the end everything revolves around showing the pictures. The lack of background information on the people, places and occasions means that the images stand for themselves and have to speak for themselves. So at first we can't expect more than to find an exclusive online gallery of old photo plates here.
© 2007-08 glasnegativ.de
<?