Why do bridges sway

When bridges begin to vibrate

Pedestrians can even set heavy bridges in motion. In lockstep, it can even result in violent swaying. Researchers have now calculated what crowd is enough for this.

London, June 10, 2000: The Millennium Bridge is ceremonially opened. The pedestrian bridge over the Thames, designed by star architect Norman Foster, is 325 meters long. It connects St. Paul's Cathedral with the Tate Gallery of Modern Art.

Then something happened that no one had expected: When crowds of pedestrians pushed for the elegant hanging structure, it began to swing. At first only very slightly, then the fluctuations became more and more violent. Many visitors could barely stand on their feet. Nobody was injured, but two days after the opening, “The wobbly bridge” was closed again.

As subsequent analyzes showed, the human factor may have played a decisive role. Movable bridge structures have a certain natural frequency, in the case of the Millennium Bridge it is fatally quite similar to that of the human gait. 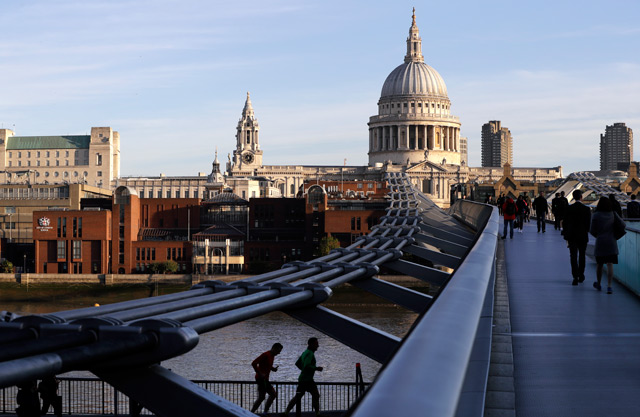 Unconsciously, the pedestrians are, so to speak, in step with the bridge and consequently have fallen into one another. As a result, the structure swayed more and more violently. This is the conclusion that researchers working with Steven Strogatz from Cornell University came to after they carried out experiments with pedestrians on the closed bridge in December 2000.

The Millennium Bridge is not an isolated case - it happens again and again that bridges built according to all known standards begin to vibrate. In order to better understand what is happening and to better prevent the phenomenon, the researchers working with Igor Belykh from Georgia State University have now developed two mathematical models.

They confirm that - in the case of the 113-ton Millennium Bridge - it was actually the consonance of the crowd with the bridge that led to the extreme fluctuations. However, the synchronization is not sufficient to explain why the bridge began to vibrate in the first place. According to the researchers, small involuntary adjustments while walking, such as changing the stride length, could have been the decisive factor.

What the two models also showed: Apparently there is a certain threshold above which pedestrians can make a bridge vibrate. At the Millennium Bridge there are around 160 people - that's not very much when you consider that up to 2,000 people were on it at the same time on the opening day. Incidentally, the value now calculated by Belykh's team corresponds roughly to that which the researchers working with Strogartz had determined in their experiments.

The mathematical models are intended to help bridge designers in the future to design structures that are less susceptible to vibration by taking the human factor into account. At the Millennium Bridge in London, additional shock absorbers were installed after the closure before it could finally be opened two years later than planned.