How many wives did Henry VIII have?

The six wives of Henry VIII / Catherine of Aragón

Catherine of Aragon: “My eyes only want you. Farewell. "

Source: Last words from her last letter to her husband, Henry VIII of England

As a child, Catherine of Aragón took part in one of the greatest events in human history. On October 12, 1492, on behalf of her mother Isabella, Christopher Columbus discovered the New World and created the basis for the later Spanish Empire, in which the sun did not set. When Columbus triumphed through Spain, Katharina was only 7 years old. 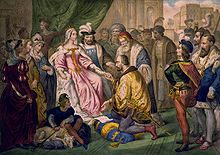 In England, King Henry VII had the army of the House of York under Richard III at the Battle of Bosworth Field. beaten and thus ended the Wars of the Roses. However, he was only able to justify his claim to the throne very vaguely and based on an illegitimate descendant. So he saw himself as a king by conquering the crown. Heinrich Tudor saw it as the most important task to strengthen his power as a monarch and to secure his supreme authority. His son's marriage to the Spanish princess would further improve his standards and create a strong alliance between England and Spain. However, his son Arthur was only 6 years old. 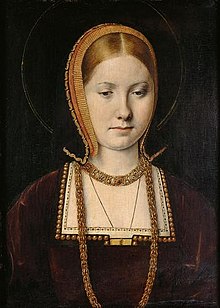 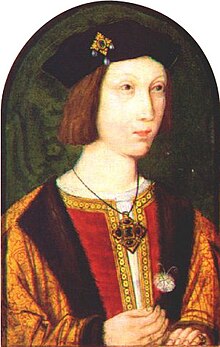 As Prince of Wales, Arthur was sent to Ludlow Castle on the Welsh border to chair the Council of Wales, with Catherine accompanying him. Shortly after the marriage both became seriously ill. Only Katharina survived the fever and became a widow after just four months of marriage. According to his father's will, the 12-year-old new heir to the throne, the future Henry VIII, should marry Catherine of Aragón as soon as he was 14 years old. The Leviticus of the Bible forbids marrying his brother's widow. However, after the ladies-in-waiting testified that the marriage to Arthur had not been consummated because of the couple's youth, Pope Julius II granted a dispensation and the marriage to Arthur Tudor was declared invalid. When Isabella I of Castile died on November 26, 1504, these marriage plans were initially put on hold. The English waited and started new marriage negotiations. Henry was now to marry Eleanor of Castile, daughter of the new King of Spain, Philip the Fair. However, when Philip I died in 1506 and his wife Johanna went mad, the tide turned again in favor of Catherine, who stayed in England during this time.

On April 21, 1509, Henry VII died. On his deathbed, he is said to have asked his son to marry Catherine of Aragón, who is extremely popular as the Princess of Wales.

Only a few weeks after the wedding, Katharina was pregnant, but in May 1510 she had a stillbirth, a girl. The second child, Prince Heinrich, was born on New Year's Day 1511, but died after 52 days. Katharina then had a miscarriage, followed by another son who died early. In 1514 Heinrich invaded France with his army in the course of the Italian wars and appointed Katharina regent during his absence. With a large army of 30,000 to 40,000 men, he crossed over to Calais and there conquered the city of Thérouanne. The Scottish King James IV, who was allied with France through the Auld Alliance, declared war on England. Katharina sent an army north. The campaign reached its bloody climax a short time later in the Battle of Flodden Field. The Scottish king fell near the Anglo-Scottish border, and with him many high-ranking nobles and ten thousand of his subjects.

In February 1516 Catherine gave birth to the daughter Mary, later Queen Mary I of England, in the Palace of Placentia in Greenwich, London. In 1518 she gave birth to a dead girl. For a number of years it has been suspected that Heinrich contracted syphilis from a mistress and passed this disease on to his wives, which explains the difficulties Katharinas and his later wives had with their pregnancies and births (Anna Boleyn had a stillbirth, Jane Seymour died in childbed, Katharina Parr and her child as well, but her child came from her future husband Thomas Seymour). Because there was no male heir to the throne, Heinrich began to believe that his marriage was cursed and a confirmation of the Book of Leviticus, after a man's marriage with his brother's wife remained childless. When it became foreseeable that Katharina would not have any more children, the preparation of her daughter Maria for the role of heir to the throne began. From 1520 the relationship between Heinrich and Maria deteriorated rapidly.

Heinrich had a number of mistresses in the later years of his marriage. Elisabeth Blount even bore him a son, Heinrich Fitzroy. Anne Boleyn, one of Katharina's former maids and sister of the former mistress Mary Boleyn, had been the mistress of Henry VIII by the end of 1526 at the latest. 17 love letters from the king to her have survived from 1527 and 1528. Anne systematically seduced the king. She was ambitious and her goal was the crown of England. With the help of Cardinal Thomas Wolsey, Catherine was accused of lying when she confirmed the failure of her marriage to Arthur that her marriage was unjust in God's eyes. In June 1529 a case against Katharina was initiated. However, no decision was reached and the case was handed over to Pope Clement VII in Rome.

After five years of waiting, Heinrich asked Pope Clement VII in March 1534 to agree to the divorce. The Pope refused, also because of the fact that Catherine's nephew Charles V, Holy Roman Emperor, had power over the papacy. After Heinrich had secretly married Anna Boleyn, he passed a parliamentary act on May 23, 1533 annulling his marriage to Katharina. The papal rejection of the annulment of the marriage drove the reform of the English Church and the establishment of the Church of England and culminated in the break with the Roman Catholic Church. Catherine refused consent to the divorce and went to court, but lost and was forced to leave the royal court. She was separated from her daughter (who was declared illegitimate) and sent to distant castles, where it was hoped that under the humiliating circumstances she would submit to the inevitable; but she never accepted the divorce and signed her last letter with "Catherine the Queen". At this time she learned that Heinrich's marriage with Anna was turning for the worse; she had not given up hope that one day he would return to her.
Catherine died of cancer at Kimbolton Castle in 1536 and was buried in Peterborough Cathedral with the ceremony of the widow of a Prince of Wales, not that of a queen. Heinrich neither gave her the last escort, nor did he allow Princess Mary to do so.

Catherine of Aragon travels to England

1514 war against France and Scotland