Who invented the folding bike?

The history of the folding bike

In the nineteenth century, before the invention of the chain drive and, as a result, the "safety bike", there was a development that led to ever larger high bikes - up to 1.80 m overall height. There was - among others - a transport problem.
William Grout, to whom we also owe the spoked wheel with wire spokes under tension alone, also invented the first "folding bike", which he patented in 1878. Not only did you have to fold it, you also had to take it apart, which is said to have taken a total of about ten minutes. The most important thing was of course the front wheel. And that could only be shared because the tires were still made of solid rubber at the time. The result is impressive, however.

From the Dursley Pedersen, patented in 1893, a dismountable model intended for the military was derived in 1900 - the prototype is said to have weighed only 7 kg. Hard to believe. The military wasn't interested at the time. Then it was sold as a women's bike, 6 kg heavier, but without a rifle mount ...

This picture of a probably Swiss soldier ready to march comes from around the same time. Unfortunately, the name and details of the bike are unknown. 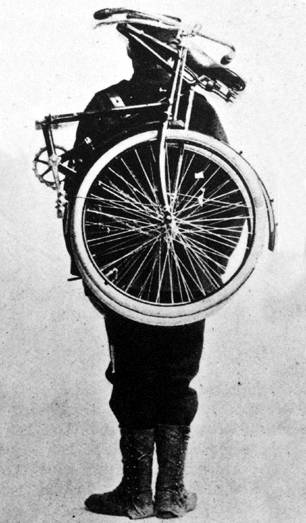 One of the first bicycles with small wheels was the "Fongers" military folding bike, which was developed in 1909 for the Dutch army. It never went into series production - but two copies should still exist. The folding mechanism corresponds to that of the "Faun". 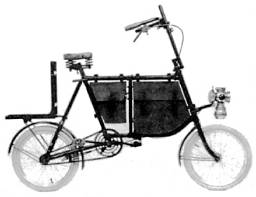 In addition to the military, manufacturers of children's bikes were also interested in folding and dismantling. Here is a nice example, the "Dandy" from 1929, with either solid rubber or pneumatic tires. 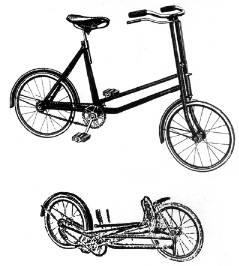 A German construction from the mid-1930s - still an early example of an adult bicycle with small wheels. Unfortunately, the name and details are unknown. 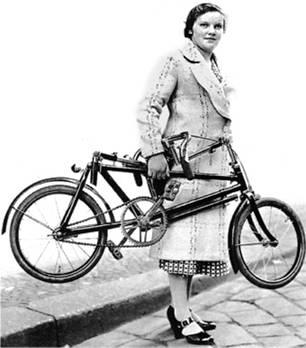 The French "Petit Bi" already looks much more modern, although it was also developed in the late 1930s. In the first picture, however, you can see a post-war model - recognizable by the missing top tube and the frame hinge.

With the handlebars folded down and the saddle retracted, the "Petit Bi" could be placed upright on the luggage rack. 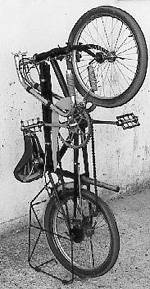 After the Second World War, Lines Brothers developed the "Triang Corgi" from a foldable moped for the British Air Force, a children's bike with a body made of sheet steel. Tanks to tricycles! 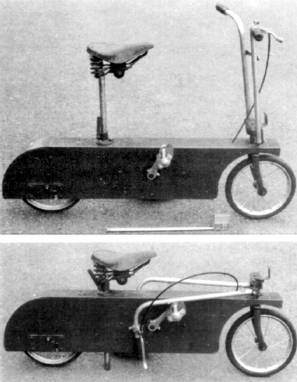 The big leap for the folding bike was made in the early 1960s. The "Moulton" combined the advantages of small wheels with excellent driving characteristics through high-pressure tires and full suspension. The "Stowaway" models can also be split in half (the "Moulton Speed" shown cannot be dismantled - but the drawing is so nice). The success of the Moultons (up to a thousand copies were made each week) triggered the "folding bike wave" that dug to its grave even with inferior models. Moutlon Museum slide show 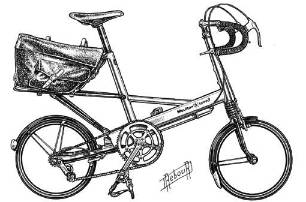 The "Bickerton Portable" developed by aircraft engineer Harry Bickerton still impresses today with its small folded size and - due to the consistent use of aluminum - incredibly low weight. The first model from 1970 weighed only 8.2 kg! Unfortunately, this only works at the expense of stability and service life. The "Bickerton" was built until 1992 after all. 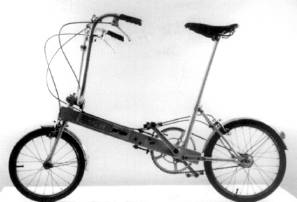 Literature: Tony Handland, John Pinkerton: "It's in the bag!", Birmingham 1996
Gunnar Fehlau: "The module bike" (at Birdy dealers, no longer in bookstores)

The story of Brompton