What is the stability of benzene

Comparison of benzene and cyclohexatriene

You know alkanes and cycloalkanes from chemistry class EF. Cyclohexane is a well-known representative of the cycloalkanes: six carbon atoms have joined together to form a ring, and each carbon atom has two hydrogen atoms. If we remove two H atoms from two neighboring C atoms, we get the cyclohexene. This connection is also known from the EF level. They are mostly used by the chemistry teacher to demonstrate that alkenes decolorize bromine water. Or as an introductory experiment in electrophilic addition in stage Q1.

If we remove two more H atoms, we get a six-membered ring with two C = C double bonds, the cyclohexadiene. This connection is no longer so common in schools.

Now you might think: Okay, if we remove two more H atoms, then we get the compound cyclohexatriene with three C = C double bonds. Wait a minute, isn't that the same thing as benzene?

In fact, no chemist has ever succeeded in producing cyclohexatriene!

Now you are definitely saying: What's that supposed to mean? Cyclohexatriene is the same as benzene!

Unfortunately, this statement is not entirely true.

Let us now compare the chemical properties of benzene and the cyclohexatriene, which no one has yet been able to produce.

One would think that cyclohexatriene with a third double bond reacts even better with bromine than cyclohexene or cyclohexadiene.

If you add bromine water to benzene, nothing at all happens at first. No trace of discoloration, absolutely no tendency towards electrophilic addition!

It is now reasonable to assume that the hydrogenation of cyclohexatriene would result in three times as much as 120 kJ / mol, i.e. approx. 340 to 360 kJ / mol.

However, when benzene is hydrogenated, only a hydrogenation enthalpy of 208.5 kJ / mol is obtained.[2] That is considerably less than one would have expected for the cyclohexatriene, approx. 151 kJ / mol less even.

Here is one of the usual graphical representations found in almost every good school book; I drew the picture myself, of course: 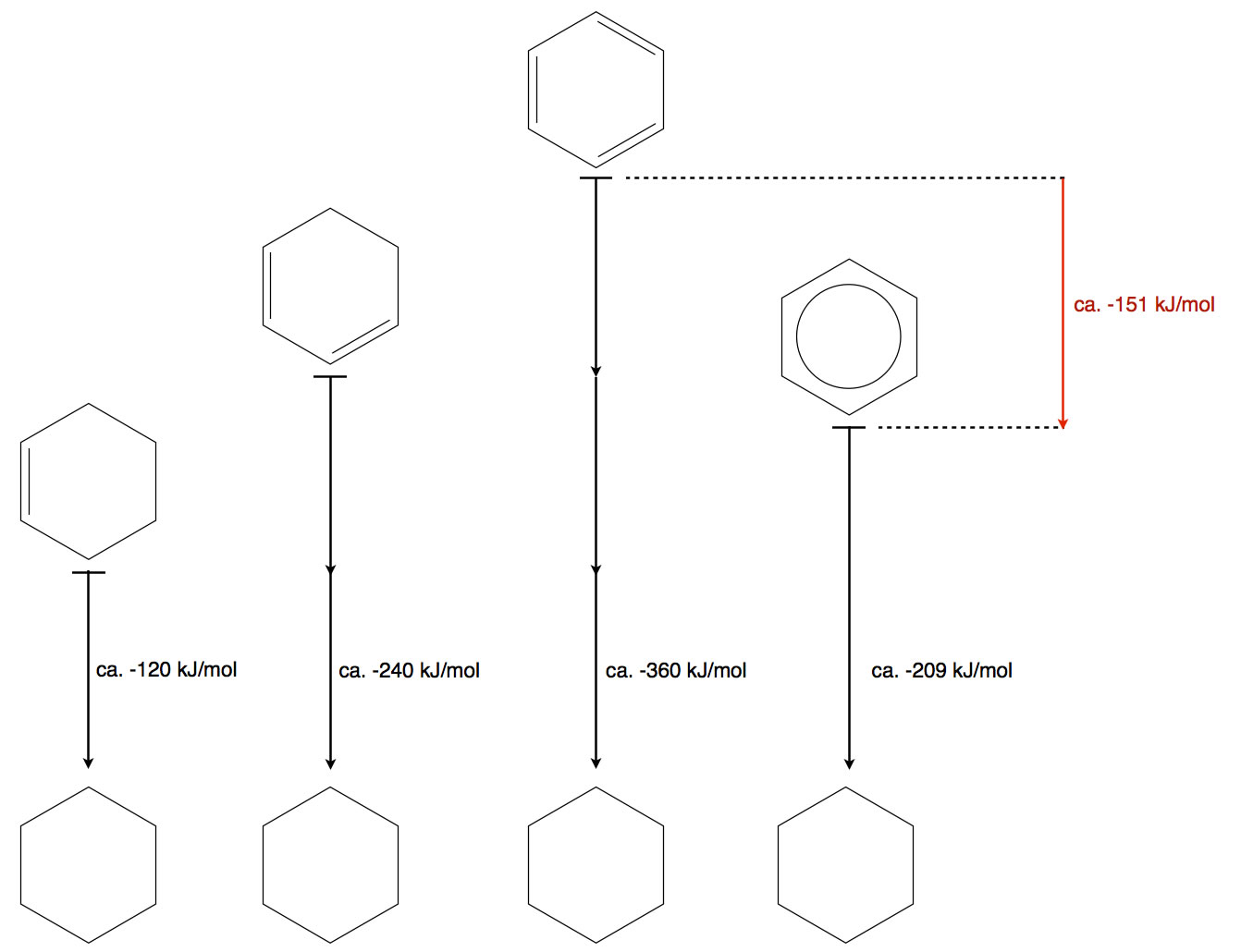 The energy difference of -151 kJ / mol, which is shown in red in the graph, even has its own name: resonance energy or mesomeric energy.

Let's summarize our findings that we have made so far:

Most important finding: All C-C bonds in the benzene molecule are equivalent, there are neither single nor double bonds, and they are very stable.

Chemists like KEKULÉ were already thinking about the molecular structure of benzene in the 19th century and asked themselves what is special about the benzene molecule. KEKULÉ carried out a lot of chemical experiments with benzene, which led him to the conclusion that all C-C bonds in the benzene molecule are equivalent. KEKULÉ finally came up with a groundbreaking hypothesis that attempted to explain this equivalence of ties

Oscillation hypothesis: The C = C double bonds in the benzene molecule "flip" several thousand times per second. For a short time each C-C bond is a single bond, then a double bond again.

We make this bold hypothesis clear by means of an illustration:

According to the oscillation hypothesis of 1872, this is exactly how the benzene structure was imagined. Accordingly, the double bonds "fold" several hundred or even 1000 times per second. A fascinating explanation that most people immediately understood.

Unfortunately this hypothesis is wrong. The double bonds do not fold over, but - as we know today - every C-C bond in the benzene molecule is actually half a single bond and half a double bond. You can find out more on the lexicon page on mesomerism, which was updated at the end of 2019.

Of course, mesomerism cannot be explained with the spherical cloud model commonly used in schools. It's time we got used to a more powerful atomic model.

You do not have to master the entire orbital model, it is enough if you know the different hybridization states of the C atom.

The aromatic state of the benzene molecule

All six carbon atoms in benzene are sp2-hybridized, and the six pz-Orbitals are aligned parallel so that they can (slightly) overlap. This creates a common ring-shaped molecular orbital in which the six pi electrons can move freely, both above and below the plane of the ring.

But I have done all this better on my fifth page about the orbital model, "The Benzene Molecule", which you should definitely take a look at now.

Not only benzene belongs to the aromatics, also all compounds that are derived directly from benzene, for example phenol, nitrobenzene or aniline. But many other organic compounds that are not at all similar to benzene are aromatic. The chemist Erich Hückel (1896-1980) determined in 1930 exactly when a compound belongs to the aromatic group. See the next page "The Hückel Rule".