We discovered every possible color

Among the colors seen, some are perceived as pure colors, basic colors, with others the intermediate position is so clear that it is perceived as a mixture of the neighboring pure colors. The pure colors are, so to speak, the basic psychological colors. In general, red, yellow and blue are mentioned as pure color sensations, in most cases also green. Most people agree quite well on their choice of pure yellow; in the case of red, green and blue, which are perceived as pure, the fluctuations are somewhat greater.
The pure red and the pure green are likely to be the colors that come closest to the corresponding cone primary colors, but the pure blue is clearly different from the S-cone primary valence, which is perceived as violet or blue-violet. And yellow does not correspond to any cone primary color at all.

The fact that we perceive colors as “pure”, i.e. unmixed, not composed, for which there are no special sensory cells at all, shows that seeing colors is not a simple, one-step process. The optical information is transformed before it reaches consciousness.

If colors are to be reproduced in a technical process by mixing basic colors, then one would like to get by with as few basic colors as possible. From the fact that our color space is three-dimensional, it follows that at least three basic colors are required for realistic reproduction.
If, as with television, on the computer screen or with stage lighting, additive mixing is possible, a rich “palette” with the primary colors red, a yellowish green and blue-violet or blue can be achieved. This will be detailed in the following articles. It should only be emphasized here that the selection of the basic colors is not clear; In addition to color, other properties are important for the luminous substances used in cathode ray tubes, for example (luminous efficacy, stability, afterglow time). For color measurement, a very large reproduction range is achieved with spectrally pure light of 700 nm, 546.1 nm and 435.8 nm wavelength.

Color orders of the artists

The artist's palette is not and shouldn't be limited to colors that can be mixed from three basic colors. Nonetheless, painters explored color space by mixing paints, and this experience guided them in the development of color ordering systems. As an example, we choose Johannes Itten's color wheel, the basis of his color theory, which had a lot of influence. (You can find the precursors in the English Wikipedia). 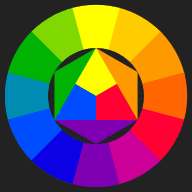 Figure 40: Color wheel and
Mixing scheme according to Itten


In Itten's color wheel and scheme, green, which is one of the cone primary colors and also a psychological basic color, appears as a mixed color (secondary color). The psychological basic colors red, yellow and blue are chosen as the primary paints for the mixture - but, as we now know, these are not the best choice for obtaining a wide variety of colors. Purple, violet and also green are therefore only obtained in rather dull shades. On the other hand, the gradations appear quite even from one hue to the next, in contrast to the color wheel shown in Figure 5, which is based on the additive primary colors discussed above.

Itten's color wheel and mixing scheme are, so to speak, hybrid formations based on psychology (pure colors) and material properties (difficult-to-understand mixing properties of paints) and neither do justice to color vision nor the full possibilities of mixing colorants.

Some art educators believe that it is important when painting to mix all colors from the "three basic colors". Why actually? The colors in nature come about through the most varied of substances. Should the three-color print be imitated when painting an image of nature or an abstract composition?

In modern and contemporary art, red, yellow and blue still play a much larger role than green (which is almost absent), see for example the compositions by Piet Mondrian (1872–1944) after 1920, which are made with pure red, yellow, blue, White and black get along, or the well-known four pictures by Barnett Newman (1905–1970) "Who's Afraid of Red, Yellow and Blue" (II, IV).

It is undisputed that we are influenced by the colors around us. It starts with general lighting, which affects everything we see and our mood as well. The difference between sunny and cloudy weather, between a room without sunlight and one with south-facing windows.

If colored surfaces are given sufficient weight, they affect us equally - wallpaper, furniture, clothing.
Red color attracts much more attention than green. Green looks calm, red looks stimulating or exciting; many authors have dealt with the psychological effects of colors, and they all agree.
In his theory of colors, Goethe names a “plus side” and a “minus side” in the color circle. "764. The colors on the plus side are yellow, red-yellow (orange) and yellow-red (red lead, cinnabar). You are lively, lively, and striving. "

"777. The colors from the minus side are blue, red-blue and blue-red. You agree to a restless, soft and longing sensation. "
Green color: "802. Our eyes find real satisfaction in it ... That is why the green color is usually chosen for the wallpaper for rooms in which one is always present. "

Psychologists have investigated the physical effects that occur when test subjects are brought into colored rooms, artists (such as Wassily Kandinsky, 1866–1944) have described the properties of colors, and color consultants (such as Faber Birren, American, 1900–1988) have examined how the color of packaging affects the behavior of potential buyers ...

None of this shall be dealt with in detail here. We just want to investigate why evolution has associated certain feelings and even physical reactions with colors.

Life in the past

The effect of the colors seems to be largely independent of race and culture, as ethnological studies have shown. We can therefore assume that the almost knee-jerk reactions were not caused by the flood of stimuli that act on us today, but rather developed at a time when an appropriate response to color was a life and survival benefit.

Let us therefore turn our attention to prehistoric times and even earlier periods when color vision reached the present state in the forerunners of mankind. 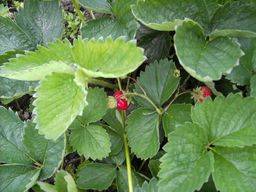 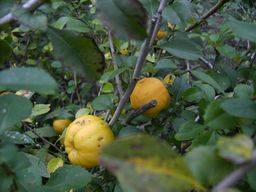 When collecting berries and ripe fruits, it is clearly an advantage to find red, orange and yellow to be conspicuous and stimulating, while it would be disadvantageous if every green leaf attracted attention.

And there are reasonable reasons why the reaction to red is stronger than that to orange or yellow: red is the color of blood. When hunting or fighting - when the red color is seen it means to make an effort, to pursue or to flee. This stress component is missing in the orange and the yellow.

A color stimulus that is seen as green is seen as dark green at low strength (“mixed with black”), and dark blue is still perceived as blue. It's different with orange and yellow. There is no such thing as dark orange - the sensation is clearly different, brown. There are good reasons for this, too: an orange fruit is probably ripe, a brown one is probably rotten. That makes a big difference, and so it is beneficial to feel the difference just by sensing the color. It is better not to be attracted by the color brown. (There is also no dark yellow, the corresponding color is olive green.)

You can see red, orange and yellow on the fire and in the embers, sunlight is yellowish-white, these colors appear warm; the colors of water, ice and the blue sky seem cold. 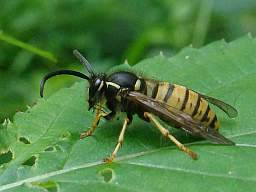 Back to overview "See, measure and reproduce colors"