How does the human brain recognize patterns 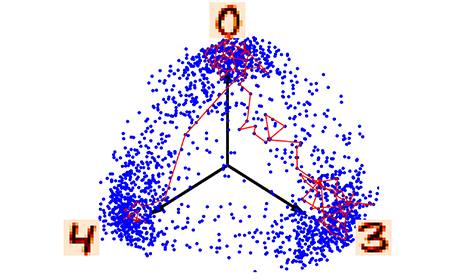 Sampling a probability distribution of handwritten numbers through a stochastic network

When making observations based on so-called sensory data, the human brain has to constantly check which “version” of reality this perception is based on. It gets its answer from so-called probability distributions, which are stored in the network of nerve cells themselves. The neurons can recognize patterns in it that reflect the knowledge they have learned. This is proven by studies with the help of mathematical methods that physicists from Heidelberg University have carried out together with scientists from Graz University of Technology. The current research results are of great importance for the development of novel computer systems. They were published in the journal "Physical Review".

One of the most important functions of our brain is to create an internal model of our environment. Two categories of information are available to him - the knowledge he has learned about known objects and a steady stream of sensory data that is compared with the existing knowledge and continuously supplement it. These sensory data are the simplest building blocks of perception, which are therefore available “immediately”. Nevertheless, observations based on sensory data are often compatible with several “realities” at the same time, as the phenomenon of optical illusions impressively proves. The brain therefore faces the challenge of becoming aware of all possible versions of the underlying reality. It jumps back and forth between these versions of reality - the brain scans a probability distribution.

The scientists around the Heidelberg physicist Prof. Dr. Karlheinz Meier have investigated this process with the help of formal mathematical methods at the level of individual nerve cells, so-called neurons. The model used for individual neurons is strictly deterministic. This means that repeated stimulation by external stimuli always evokes the same response behavior. However, the brain is a network of neurons communicating with each other. When a nerve cell is stimulated strongly enough by its neighbors, it fires a short electrical pulse and in turn stimulates other neurons. In a large network of active neurons, nerve cells become stochastic - their “response” is no longer determined, i.e. precisely predictable, but follows statistical rules of probability.

“With our investigations, we were able to show that such neurons obtain their response from probability distributions that are stored in the network itself and scanned by the nerve cells,” explains Prof. Meier. In this way, neurons can, for example, recognize patterns that reflect learned knowledge. The research was carried out as part of the European Human Brain Project, in which the Heidelberg scientists, under the direction of Karlheinz Meier, are developing novel computer systems based on the model of the brain. “The concept of statistical sampling of learned probabilities is very well suited for implementation in a new architecture for computers. It represents a focus of the current research of our working group ”, says the physicist who teaches and researches at the Kirchhoff Institute for Physics at Heidelberg University.