Forgetfulness can be really annoying. With your head full of information, suddenly a switch seems to have been thrown - everything gone, as if deleted. Sometimes it helps to think deeply and brood over a long period of time so that you can remember what you have forgotten. Often the memory comes too late or the forgetfulness is permanent. Constantly forgetting is not only annoying, but highly unprofessional and problematic for your career. That is why we explain to you what causes it and what you can do against forgetfulness ... 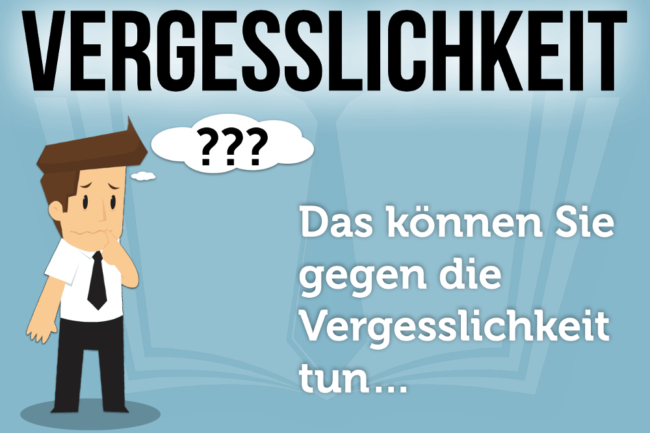 Forgetfulness: When knowledge and information disappear

Forgetfulness is when you simply cannot remember information, dates, facts, names or other things, although you are quite sure that you actually know them and should be able to call them up from memory. Everyone has experienced this phenomenon before and it can occur in a wide variety of situations. Some particularly common and well-known examples of forgetfulness are ...

Such everyday forgetfulness is annoying - and often also unpleasant - but the consequences are usually limited. In the job, however, forgetfulness does not go down well - neither with colleagues, with the boss, and certainly not with customers.

Not sending an important email out of forgetfulness, missing a meeting or forgetting an appointment with a customer? Or you meet an important business contact and you can't think of the name. Not at all helpful for success and a career, and in the case of recurrence, forgetfulness is even a real career killer.

Causes: where does forgetfulness come from?

Sometimes our thoughts are just elsewhere or we mix up information. There can also be concrete causes behind forgetfulness: For example, fatigue reduces cognitive abilities and increases the likelihood that you will forget things. The same applies to physical and mental exhaustion. The sloppier you are, the more forgetful you become.

Other causes of forgetfulness can be lack of fluids or malnutrition. But the consumption of alcohol, drugs or medication can also lead to forgetfulness. In other cases, frequent forgetting can be promoted or provoked by illnesses - these include thyroid disorders, heart failure or anemia.

Can stress make you forgetful?

A clear answer: yes! In fact, stress is a particularly common cause of forgetfulness. In the job in particular, great tension and exertion lead to overuse of the memory. We literally wear out our thinking apparatus. This creates a mental exhaustion that makes you forgetful. The synapses are running at full speed, countless things are being thought about, the capacities are being used to the maximum and beyond - information, facts and details are increasingly being lost.

However, not all types of stressors necessarily lead to more forgetfulness. There is a positive stress, the eustress, which boosts our performance and gives a motivation kick. The unhealthy distress, on the other hand, puts a strain on our short-term memory and the ability to concentrate.

When is forgetfulness a cause for concern?

It's normal to forget things every now and then. As a result, you usually don't have to worry about the occasional forgetfulness. However, chronic forgetfulness can also be a symptom - and in this case, you should pay closer attention to it. A common fear with growing forgetfulness: dementia.

Forgetfulness is a symptom of the disease - but only one. Usually there are other difficulties such as a deteriorating sense of direction or language problems. So not every forgetfulness means the onset of dementia or Alzheimer's disease.

You should talk to a doctor about your forgetfulness if it becomes a chronic condition and you suffer from it increasingly. Even if the cause is harmless, in such a case it is better to have a diagnosis from the doctor.

Tips: What can you do about forgetfulness?

For those who are plagued by too much forgetfulness, we have good news. You can do something about it. As follows:

Despite digital detox and the recommendation to use the smartphone less, it can help us to reduce our forgetfulness - if we do it right. With the right apps, you can counteract forgetfulness, cache information so that it is easy to find, or improve organization.

We have put together a small overview of apps that can help against forgetfulness:

Nils Warkentin studied business administration at the Justus Liebig University in Giessen. In the career bible, he is devoted to topics related to studies, career entry and everyday office life.