How can I apply to the Hungry Academy 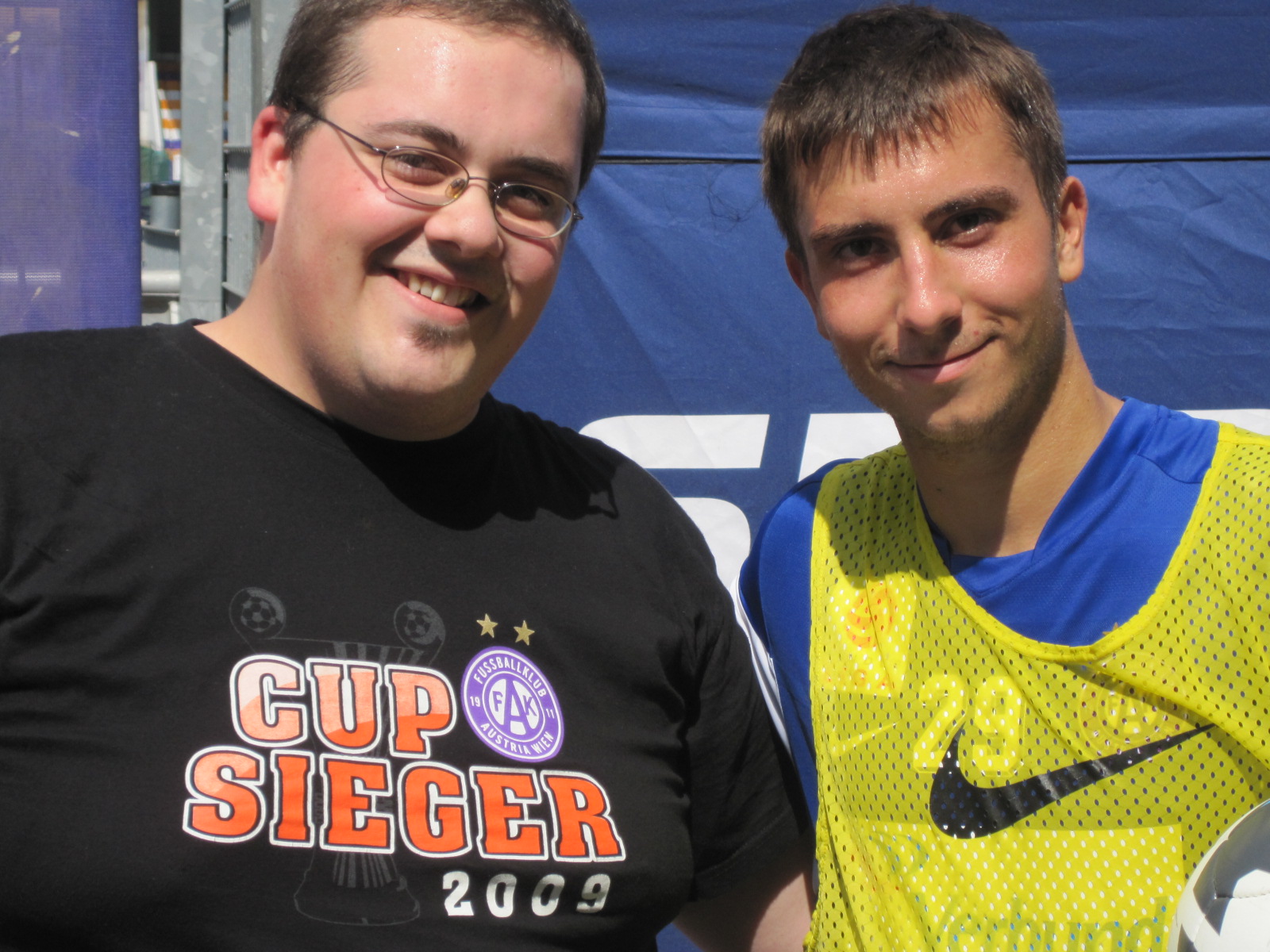 During the 2010 training camp in Flachau, during the game against Dinamo Bucharest, the sympathetic left-back Markus Suttner agreed to answer the Lungauer Veilchen's questions. At a somewhat brisk pace, since Sutti had to go to the already filled team bus, he still answered every question in great detail. Here is the interview:

Hungry: You fought your way through the entire youth department of Austria and made the leap into the combat team. How do you rate your own performance, do you still have room for improvement and is there anything that you are not completely satisfied with about yourself?

Markus Suttner: Yes, I still have room for improvement. On the offensive, I'm not as good as I want, and I especially have to increase my scoring risk. Like you told me on Sunday, I have to shoot more often, but I don't get the opportunity to do so often enough. I also have to get my right foot into play a little better. I'm not entirely satisfied with last season, it was OK, but I can do better.

Hungry: The anniversary year is ahead of us. What do you expect from this special season and where do you think we will end up in the three competitions (championship, cup, euro league)?

Markus Suttner: It's clear in the championship. We want to become masters. It is the anniversary season and the goal can only be the master, we will do everything possible for it. We want to get back into the group stage in the Euro League and as far as possible in the Cup.

Hungry: You also have a competitor of your own, Marin Leovac. How do you two deal with this situation that you both have to fight for one place?

Markus Suttner: I like Leo, we both get on very well. There is no such thing as envy or hatred between us when the other is playing. This is a coach decision. Of course I'm disappointed if I don't play, but neither will I be on the pitch in the 15 years I've been playing football. You also have to be able to deal with not playing for once.

Hungry: You know the youth work at Austria very well. What could be improved on that?

Markus Suttner: Back when I was young, I had to go to the academy in Hollabrunn. That wasn't great. The proximity to the combat team would have been better. But that has now changed with the academy, which I think is great. It's good to have good young players in the academy, and it is also important for the youngsters to see that you can also play on the fighting team as a youngster. So right now everything is perfect in youth work, sporty as well as the infrastructure, because Austria has always been top in terms of training

Hungry: How important do you think that Austria has recently invested a lot in the infrastructure. Keyword training grounds, east stand, academy, pub, etc.?

Markus Suttner: As I have already said, the academy is very important. Now all the teams are training nearby and that is especially important for the young players. The rest of the infrastructure in Austria is now top notch! At the moment I can only say that I think it's perfect.

Hungry: Which path do you like more in football? The current path of Wiener Austria with many young Austrian talents, where tradition is also important, or the path under Magna / Red Bull with a big boss and a lot more money for it?

Markus Suttner: Of course, I like Austria's path. With the young players you also develop a spirit and a good team feeling. However, football is also our job and we only have a few years to really earn money with it. If you can't go abroad then certain players go to Red Bull so that they can make a lot of money there.

Hungry: How important is tradition in football for you?

Markus Suttner: Super important. I've been an Austria Wien fan for a long time, it was always my dream to be an Austria player one day, which I achieved. I want to achieve a lot with Austria and also make the leap abroad through Austria. I owe a lot to this club

Hungry: How important is money to you in football?

Markus Suttner: You should have fun with football, that's the most important thing. It doesn't do you any good if you make a lot of money but never play. Every footballer wants to play. But of course money is also important, you might play until 35, then it's over. Until then, you have the opportunity to earn a lot of money in football. You have to find a balance between stakes and salary. All in all, money is important, but not the most important thing

Hungry: What does FK Austria Wien mean to you?

Markus Suttner: This is an affair of the heart for me. I've been playing for Austria since I was under 14. The association has a long tradition and is also my employer. I'm a fan of this club and you could say I'm a real violet.

Hungry: Can you imagine playing for a different club in Austria than Austria?

Markus Suttner: If Austria offers me a perpetual contract, I'll sign it (laughs). So, as long as Austria wants me, I will of course play for this club. If at some point she doesn't want me anymore, I'll have to look for another club, but I'd prefer to go abroad.

Hungry: But would you change clubs within Austria if Austria offered you a contract, like it was with Fränky Schiemer?

Markus Suttner: I actually wouldn't have planned that (laughs)

Hungry: Which players in the team do you get along particularly well with and how do you find the newcomers?

Markus Suttner: I get along best with Robert Almer, he is also a very good friend of mine in his private life. In general, I get along very well with everyone. There are many young people there, so there are no groups. We are a team and stick together. There is no one on the entire team where I would say I don't like them that much. As for the newcomers, I think everyone is a real reinforcement for the team and I hope they shoot us to the championship title

Hungry: What's your honest opinion? Commit Koch / Bodner or rely on Klein / Vorisek as an RV?

Markus Suttner: The fact is that we don't have a very large squad. Flo (note: Klein) and Vorisek play the right-back very well. But what if Stankovic fails, Flo has to go into midfield and if we play with two sixes, like today, then we need a backup there too. So I wouldn't think it would be bad if we signed someone.

Hungry: Who would you prefer? Fabian Koch or Laszlo Bodner?

Markus Suttner: I honestly have to say to Koch that I know almost nothing about him. I only heard that he played big at Innsbruck recently, but I've never seen him myself. On the other hand, I know Bodner well from the time he played in Salzburg. It would of course be a very good commitment. His throws and flanks are very dangerous. I would be very happy about this commitment. But unfortunately I cannot give a judgment on Koch

Hungry: Who is your personal favorite for number 1 goal?

Markus Suttner: Oh man. That is a difficult question. Of course I hope in Robert Almer, although I don't really think so

Hungry: When warming up before the game, during training - you are often seen at the very front as the "leader" of the team. Do you see yourself as possibly a future captain?

Markus Suttner: (laughs) Actually, nobody wants to run in front, that's torture for the players. I actually "wish" and that's why I always run in front. After all, somebody has to run in front. But I could very well imagine that I would be able to wear the captain's bow in 1-2 years.

Hungry: What are the differences between Milenko Acimovic and Jocelyn Blanchard in the captain's role?

Markus Suttner: They are two very different types. Mile (note Acimovic) is a very quiet guy. He also lets the older Austrians talk a lot about what Standfest and Hattenberger were last season. He says something to us often enough, but everything in a calmer style. Jocy (Blanchard's note) often said something and was sometimes loud. But as I said, Mile is the quieter guy

Hungry: What do you think of Karl Daxbacher, his gaming system and his training?

Markus Suttner: I grew up with the 4-4-2 system and can handle it very well. With a coach, only success counts and that's what we currently have. During training, Daxbacher is very match-related, which is of course very important for further development in the game. He also promotes the young players, which is also very important and is also good for the future of the club.

Hungry: How do you feel about the atmosphere in the team?

Markus Suttner: Great, just great. First of all, there are a lot of Austrians in the team and almost only German is spoken. We don't have five languages ​​on the team, which is very important. Second, we have a lot of youngsters on the team, which has made us a tight-knit group. The training is fun, the atmosphere is very good. We are a team.

Hungry: If you were President of Vienna Austria, what would you change?

Markus Suttner: (laughs) I don't know! I don't dare say anything here. I don't have enough insight into Mr. Katzian's work and I don't know what's going on right now. Here I would say let's let the president be president.

Hungry: What does a Markus Suttner do privately?

Markus Suttner: I mainly spend my free time with my girlfriend. She is a teacher in a grammar school and that is why it is unfortunately often the case when I come home, she leaves and vice versa. That's why we try to spend our free time together. Then we go shopping, in a coffee house, eat somewhere or watch a movie in the cinema.

Hungry: What would you be today if you hadn't become a footballer?

Hungry: Describe yourself in one word?

Hungry: What is your long-term goal as a footballer? (National team, abroad ...)

Markus Suttner: I have a contract with Austria until 2012 and another option for 2013. I'll be 26 years old then. In the next few years I would like to make the leap to the national team and move abroad in 2012 or 2013. But I don't want to go abroad to have played abroad. It has to be a lucrative offer where I can play. I don't have to go to a top league or to his top club. For example, the second German Bundesliga is also very interesting. The overall concept just has to fit. I want to play because I want to have fun with football, money is not always the most important thing.

Hungry: Is there anything else you would like to tell us Austria Wien fans from Salzburg?

Markus Suttner: I think it's great that there are Austria Wien fans in Salzburg. I hope you continue to visit our games and support us as much as you can so that we can hopefully celebrate the master for the anniversary

Hungry: Thank you for the interview, Markus